One in four Tajik citizens lives and works in Russia. Ksenia Diodorova spent last winter photographing families living in Tajikistan’s remote Gorno-Badakhshan province, then met with their relatives working in Russia to support them financially. The result is In The Cold, a photo essay illustrating the harsh realities each side faces. Radio Free Europe provides an insight into Diodorova’s touching photographs. 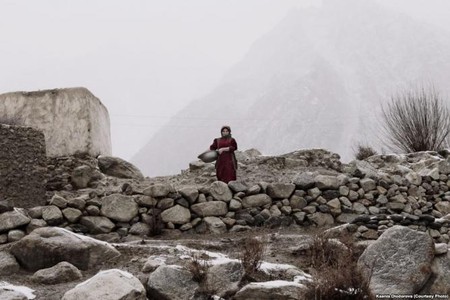 Ksenia Diodorova spent the month of January 2014 in the Bartang valley of Tajikistan’s mountainous Gorno-Badakhshan province. She lived with local residents whose sons, daughters, siblings, or parents are working in Russia. 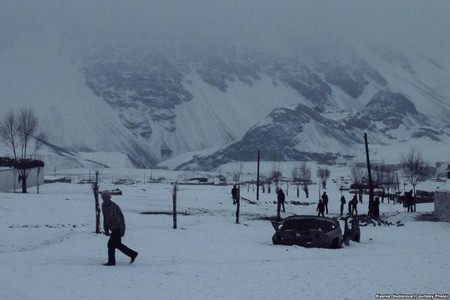 This is one of Tajikistan’s most isolated regions. In winter, snowfall cuts off the valley from the rest of the world. Roads are often unpassable, electricity supplies are sporadic, and only one village has mobile phone reception. 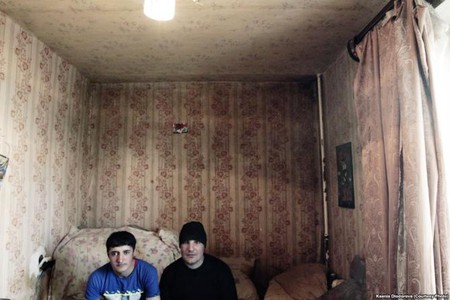 Eight people whom Diodorova met in the Pamir mountains soon came to Russia. They are now migrant workers. They will set aside as much as possible from their meagre salaries each month to support relatives in Tajikistan. 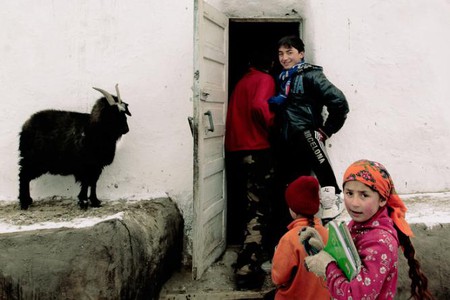 in Bardara) Garibsulton has two children. She moved to Moscow several years ago after her husband, a schoolteacher, died of cancer. She works in a shopping mall cleaning dishes at an Uzbek cafe run by a man from Azerbaijan. 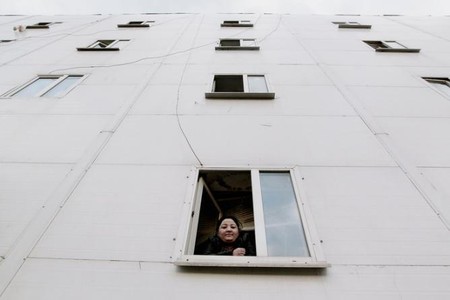 (in Moscow) Garibsulton lives in a dormitory for migrant workers near the shopping mall. She pays 3,000 rubles per month and gets free meals. This is a good arrangement; she is able to send almost all her salary back home. 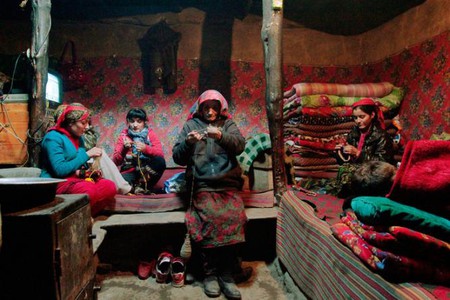 (in Bardara) In winter, Tajik women knit traditional Pamir dzhurabs, brightly colored socks from goat or yak wool. This is Faridun’s home. His brother, who has just returned from Russia, is sleeping. 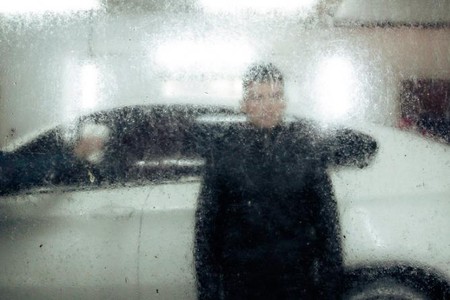 (in Moscow) Faridun works at a car wash outside Moscow. In January, his wife had a baby girl. When he next sees her, she will be 18 months old. 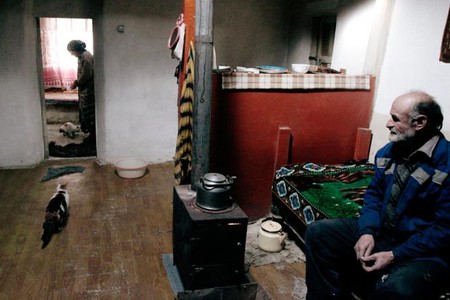 (in Khuchez) Khairulo and Baskhotun’s son, Mirfaroz, has lived in Russia for seven years. He works on a construction site. 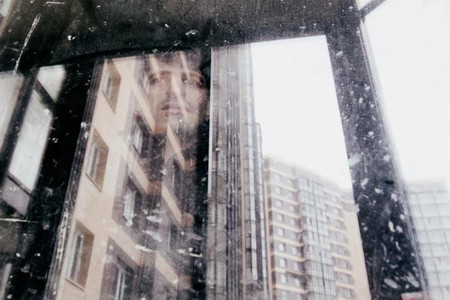 (in Moscow) Mirfaroz announced in March that he planned to get married in Moscow and promised to bring them over for the wedding. 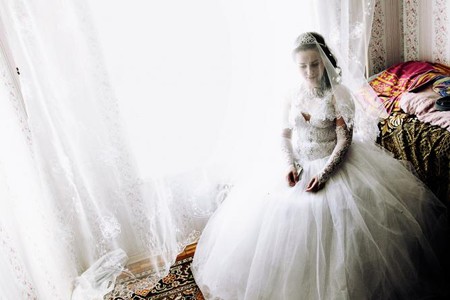 Mirfaroz married his fiancee, Fazila, a month later. His mother traveled all the way to Moscow for the wedding.

LEFT: (in Roshorv) There are six sisters and three brothers in the Kubaev family. The husband of Gulsara, one of the sisters, and her brother, Kadam, work together on a construction site in St. Petersburg. RIGHT: (in St. Petersburg) Kadam hasn’t been to Tajikistan for seven years. His relatives would like him to marry, but he says his priority for now is to support his family and pay for his sisters’ studies. 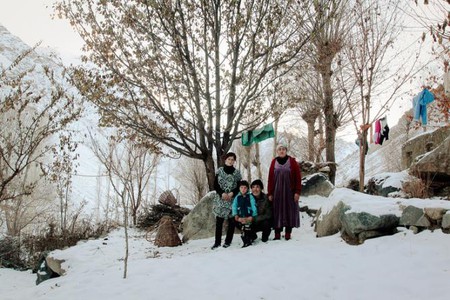 (in Ravmed) The name of the village where Dzhuma and his family live means ‘the path to hope’ in Tajik. Dzhuma’s brother Alikhon went to Russia 17 years ago and hasn’t returned since. His wife Tamina came back to the village several times to give birth. Alikhon says he sends all his money home and can’t afford two tickets to Tajikistan. 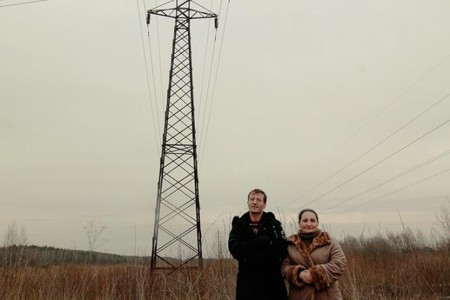 (in Moscow region) The couple’s youngest daughter is six years old. She calls her father ‘uncle’ and her mother ‘auntie.’ Their eldest son studies at a prestigious, paid school in Khorog, the capital of Gorno-Badakhshan province. 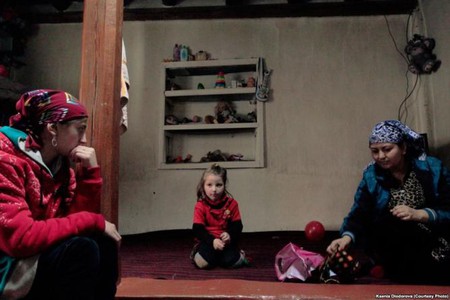 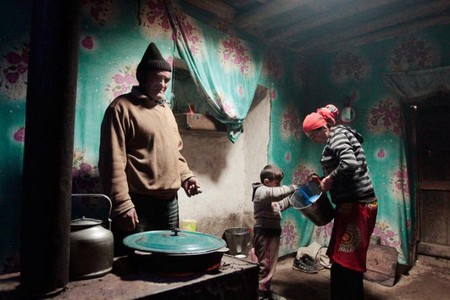 (in Roshorv) Dzhuma went to Russia three years ago to support his brother in Tajikistan. His brother studies at a technical school specializing in economics and practices sambo, a type of martial art popular across the former Soviet Union. Last, year, he won first place in a national tournament. 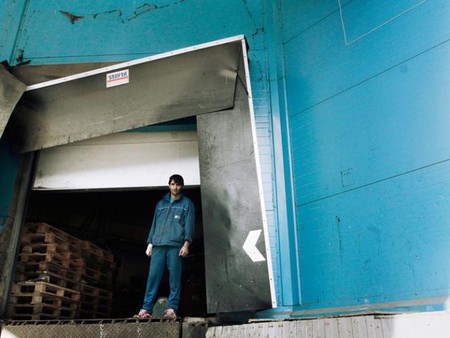 (in St. Petersburg) Dzhuma first worked in Moscow before joining his other brother in St. Petersburg. He now offloads goods at a supermarket from 9 a.m. to 10 p.m., seven days a week. 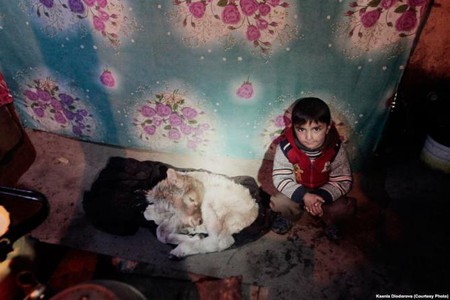 Dzhuma’s nephew is afraid of the dark. There are two light bulbs in his home, one of which is powered by a small solar panel and left on all night. Almost all houses in Roshorv are equipped with solar panels, purchased as part of a EU initiative. Power supply to the village otherwise is very poor; outages happen several times a day. 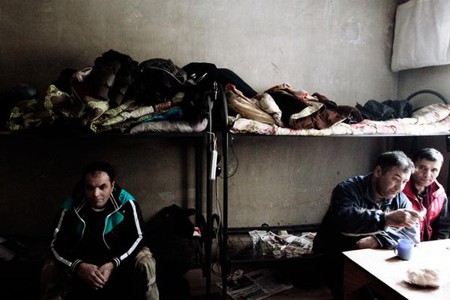 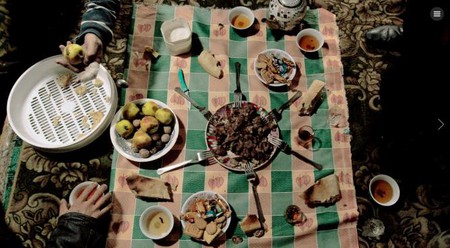 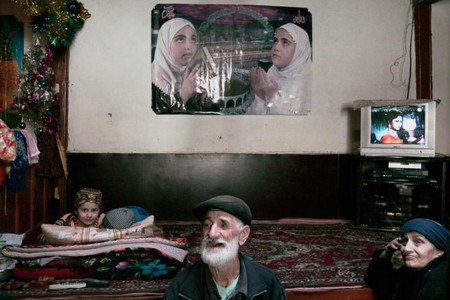 (in Khichez) Tajik migrants rent out flats with relatives or people from their home village. The rent for migrant workers is 1.5 times higher than for Russians. Six or seven people live in each room. 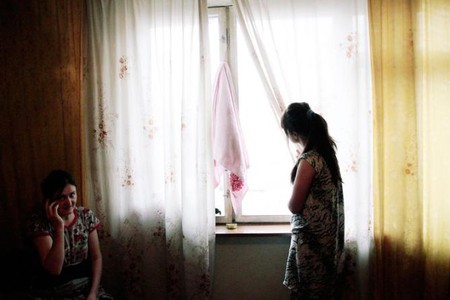 (in Moscow) In the evening, mattresses are unfolded and spread on the floor. That’s how people sleep in Pamir, lying close to each other to stay warm. 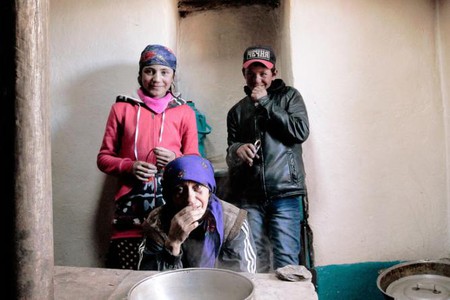 (in Roshorv) This is Shakartokhun. Her son and daughter work in Moscow. Her husband was recently deported from Russia. Getting proper documents in Russia is difficult. It’s also expensive – $45 for a three-month residency permit and $880 for a one-year work permit. 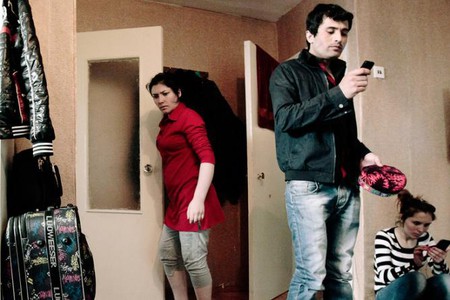 (in Moscow) Deportees have three days to leave the country. If they can’t afford a ticket back home, they are placed in a special detention center. Some of them are forced to ‘earn’ their return ticket by working without pay. This can last up to six months. 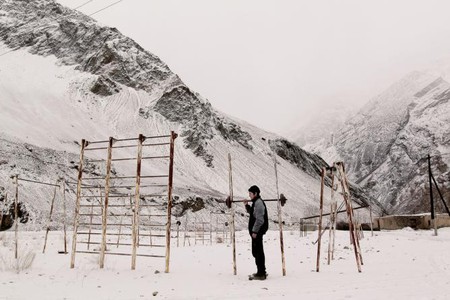 An open-air ‘gym’ in the Bartang valley.

LEFT (in Ravmed): Kholik serves as the khalifa, or Muslim cleric, for two villages in the Bartang valley. His son Karim has not been home for seven years. He works as a warehouse porter in the Moscow region. Three years ago, Karim’s wife returned to Pamir to give birth. RIGHT (in Moscow region): Karim has never seen his daughter, Noziya. He speaks to her on the phone, but she always repeats the same phrases: ‘When are you coming back?’ and ‘Send money.’

Diodorova is currently raising money to publish a book based on In The Cold. For more information, visit her fundraising site.

Republished with permission from RFE/RL and Ksenia Diodorova