This Hotel in Taiwan is Perfect for Video Game Fanatics 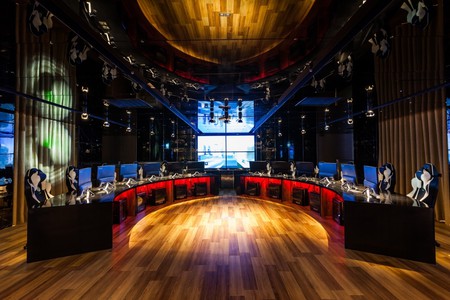 The gaming arena | Courtesy of i hotel

If you’re obsessed with video games, spending a vacation away from your console or PC may seem a little daunting. But travelers visiting Taiwan need not fear, because one hotel in the region comes straight out of a gamer’s dream.

The island that brought love motels to the world now meets the demands of a different clientele, as the first dedicated e-sports hotel in Asia, iHotel, opens its doors. The hotel is built to provide gamers with a clean, welcoming, and high-tech environment. 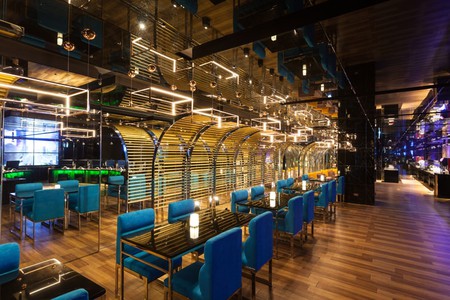 The ultra-modern lobby | Courtesy of i hotel

As soon as guests walk through the doors of the iHotel, any illusion that it’s simply another themed hotel evaporates. The place is designed by gamers for gamers, but it’s not just wall-to-wall computer desks and monitors. The décor is ultra-modern with a dark theme in the public areas and hardwood floors throughout. Just inside the lobby, there’s a gaming arena where two teams of six players can take on each other. Here they do battle on gaming machines with GeForce GTX 1080 Ti Graphics cards as they sit in their DXRacer gaming chairs. 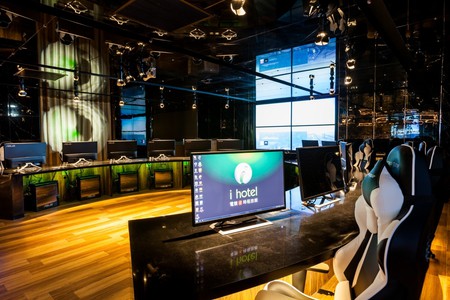 Gaming in the lobby | Courtesy of i hotel

The hotel cafeteria is an extension of the lobby’s design and has a real contemporary feel with chrome everywhere. Here guests can enjoy fresh roasted coffee and breakfast each morning or just sit down and take a break from gaming. 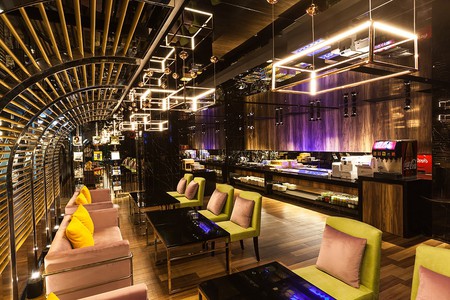 A place to relax and enjoy breakfast | Courtesy of i hotel

Head into the brightly-lit bedrooms, and you’ll find not one but two ASUS ROG Alliance pcs with i5-7400 processors, 16GB of Ram and a 1060 GPU. There are the same DXRacer chairs you get in the gaming arena and two 32” HD monitors. And when you’re done gaming there’s a very comfy bed with a killer Slumberland mattress (not that you’ll be sleeping much) and a 55” 4K Ultra HD TV. 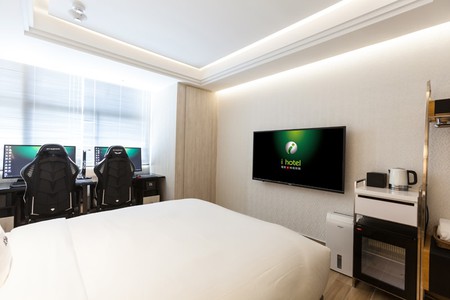 A comfy bed and a huge TV | Courtesy of i hotel 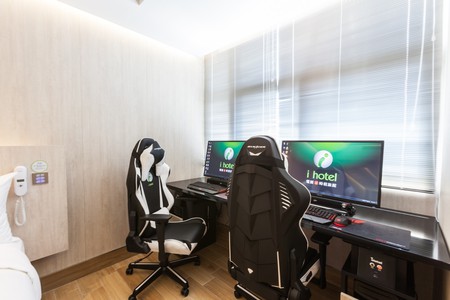 Top class gaming machines in each room | Courtesy of i hotel

A room at the hotel, which is located in the Taoyuan district — about an hour from Taipei on the train — costs on average $100 a night. You can also rent the rooms by the hour if you’re going there purely for the video games. Rates are $12 an hour during weekends and $75 for a 15-hour marathon gaming session.

Check out the video below to see all the hotel’s best features.

Video games are a big deal in Taiwan. In April 2017 an e-sports league organized by Activision Blizzard kicked off in Taipei with a contest involving eight professional teams and a prize pool of around $272,000. The tournament was held in the Blizzard eStadium, a permanent e-sports arena which opened in 2017. The stadium seats up to 250 fans, and isn’t the first e-sports venue in Taiwan’s capital — the Garena esports stadium was opened in 2014.