The Most Beautiful Places In Taiwan 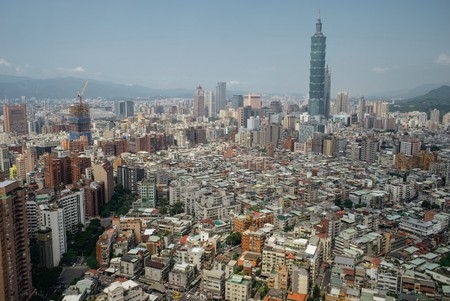 Planning what to explore in Taiwan? Here are the 10 most beautiful sights and places in Taiwan, offering picturesque landscape and characteristic architecture, from the naturally formed volcano to the abandoned railway station embracing a stunning sea view. 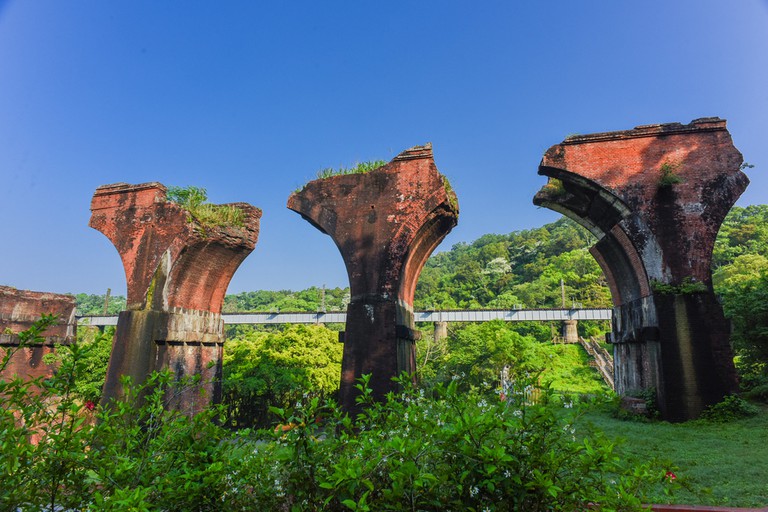 Lungteng Bridge in Miaoli, Taiwan | © weniliou/Shutterstock
As one of the old railways that connected citizens to other cities in the early 1900s, this bridge was left broken and deserted after a tremendous magnitude 7.1 earthquake in 1999, and was soon substituted by a new bridge built on its western side. Built only with bricks, Yuteng literally means a ‘fish-poisoning shrub’ that acts as a crescent blade to protect villagers against a legendary carp monster that lives inside the lake and brings hazardous events to the place. The magnificent remains of the bridge stand erect in Sanyi Town and are now the highest iron bridge in Taiwan. Every year in April, the bridge is embraced by White Tung flowers that construct a picturesque and stunning view.
Open In Google Maps
9-5 龍騰村, 367, Taiwan
+88637352961
Visit Website
Give us feedback

There are about 600 ancient stone fish traps in the world and Taiwan has 574 of them. The one in Qimri Township features a uniquely stacked pattern. Also known as the Twin-Heart Fish Strap, the Double Heart of Stacked Stones is located in Penghu County. It is notable for its well-preserved strap made of stacking stones that are structured in double-heart shape. The beautifully stacked rocky bank foils the clear and turquoise water, embodying the charm of nature.

Managed by the Taiwan Railways Administration, Duo-liang Station is a now an obsolete elevated railway stop point in Taimali town. Overlooking the breathtaking landscape of the Pacific Ocean, and embraced by bushes and mountains that are naturally inviting, the abandoned railway station is regarded as the most beautiful in Taiwan, and the station with the most remarkable scenery. Duo-liang Station has officially ended its railway service and serves as a tourist spot with a roof terrace to enjoy to aerial view. Despite the end of its active service, the charm of the station still remains and trains will occasionally pass along the rail.

A Lang Yi Old Path is an old trade route for indigenous people in the East with hundreds of years of history. The path stretches along streams, stunning coastal lines and sea cliffs. Watch out for the endangered Chelonia mydas turtles that reside in the rivers along the route. Strolling on the paved path, the azure sky heaves into sight, accompanied by the sound of waves lapping the shores. With the ocean on right of the path and mountain on the left, the fluctuating topography reflects the tectonic plate jams took place in the spot, and bears witness to the amazing power of nature. Plants with vibrant vitality, including phoenix hanceana, scolopia and the rare plant called Caecalpinia bonduc, flourish along the pavement.

Abound with fruitful paddy fields, Chishang features fertile flatlands, turquoise lakes, and mountainous hills that make itself a must-go spot in Taitung County. The Daporiver in Chishang also has a long-history, and is a prestigious spot for cultivating rice and breeding fish, and contains ruins of Shauku old streams after they were blocked. The splendid paddy fields reflecting the setting sun add shining stained-glass-like colours to the farmland, while the rippling water in Dapo river is splendid, with rapeseed flowers growing alongside.

Imbued with woods and trees, the Beitou Library (the Beitou branch of the Taipei Public Library) offers ‘forest bathing’ indulgence while reading good books in magnificently designed architecture. It received the diamond certificate of EEWH (ecology, energy saving, waste reduction, and health), as this green library was built entirely using recycled materials and woods from managed forests to create a eco-friendly reading space, with natural light adding to the relaxed atmosphere. Covered with photovoltaic cells, the roof converts sunlight into electricity, while rainfall is reserved to be used for toilet flushing. Displaying architectural distinctiveness, visitors will feel the joy of coexisting with nature.

Blue skies, white clouds, well-maintained ecosystem and the clear ocean are what constitute Ho Ping Island. Ho Ping Island is connected to the off-the-coast Keelung City by Ho Ping Bridge, which might possibly be the first reinforced concrete bridge built in Taiwan. With precious geological landscapes, the shores of Ho Ping Island are abundant with wave-cut platforms, sea cliffs, wine erosion pillars, and chessboard rocks formed by alluvial flooding. Strolling along the shores, visitors can savour the picturesque beauty of the islet and capture the orange sun as it disappears behind the sparkling turquoise ocean. 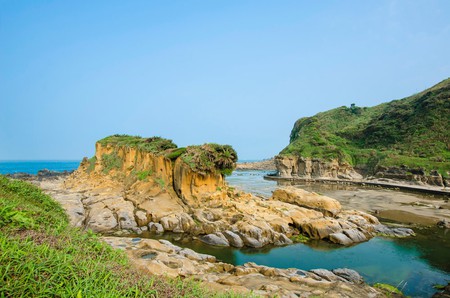 The rocks at Yehliu Geo Park are acclaimed as one of the world’s renowned natural wonders. The coast in Yehliu underwent multiple geological processes, including wave erosion, rock weathering, and crustal movement, to form such a peculiar yet rare landscape. The Geo Park is separated into three areas: the first area is the important congregation area of mushroom rocks and ginger rocks; the second one is prestigious of dragonite and diamond, including the 24-filial piety hill; and the third zone consists of a sea-erosion landscape, ranging from wave-cut platforms, torrent waves, to rocks in grotesque shapes. The famous Queen’s Head is an erosion pillar that resembles a lady wearing a crown crusted with jewels and diamonds, while the rose-like stones contain the traces left by fairies. 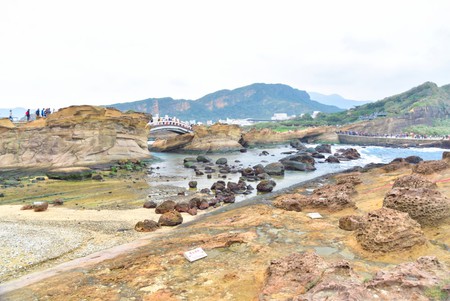