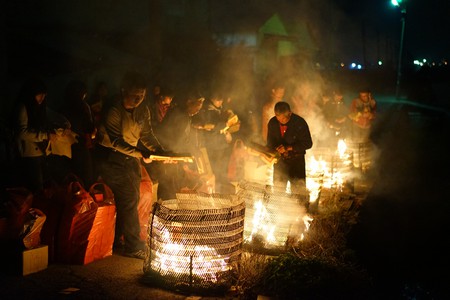 Ghost month is upon us, so if you’re planning a trip to see the sights or are already in Taiwan, then there are some things to take note of. Don’t worry, it’s not as scary as it sounds. In fact, do the right thing and you may notice a bit of good luck coming your way. Before we get to that, let’s take a look at the things you should avoid because, in all honesty, there’s quite a few.

Don’t do any house repairs

Apparently, ghosts like to run amok during this month and are particularly attracted to things that have just been repaired.

Don’t move into a new home

When you move house, you are opening your new home to the spirits that are currently roaming the earth. Best to wait until the month is up.

Starting a relationship during this time may result in a ghost joining the union. They’ll play havoc with your love life!

Ghosts like interfering with sad folk, and if you break up with your significant other, then you may encourage spirits to play with their emotions.

As with starting a relationship, those who get married during ghost month may not last. Better to save the date for later in the year.

Night is the time when ghosts are most active, so it makes sense to avoid going out too late. Driving alone should be avoided in case of accidents which ghosts may cause or be attracted to.

Ghosts want nothing more than to find a body to possess so they can cause even more damage. A lone person at night is a prime target so if you go out, do so with friends.

Whistling, along with knocking sounds, attract ghosts and once you have their attention, they may not leave you alone.

Evil spirits that drowned in the past may look to possess your body in order to have a second chance at life. Stay out of the water!

Don’t sit in the front row

We’re not talking any front rows here, but the local Taiwanese Opera shows. The front rows are reserved for spirits and sitting in their place is understandably frowned upon.

Money on the street is not the happy occurrence you may think it is. Take it home and you’re bound to have bad luck for quite some time. This is particularly true of ghost money as it’s an insult to spirits.

Don’t turn your head if someone pats your shoulder

You have two protective flames, one on each shoulder. If a ghost pats you on the back and you turn your head, you may snuff out a flame and leave yourself open to attack. Turn your whole body instead.

Don’t lean against a wall

For some reason ghosts like walls, and if you’re leaning on one during ghost month, you may leave yourself exposed to evil spirits. Stand straight anyway; it’s better for your posture.

Don’t pee on a tree

This actually holds true for the entire year. Tree spirits will feel highly offended (and rightly so) if you pee on their home.

Don’t hang clothes out to dry at night

Ghosts are devious entities, and if they get into your clothes at night, you may unwittingly bring them into your home the next day.

That’s a rather long list of things to avoid but not to worry, there are some things that you can do to counteract any of the bad luck you may have picked up during the month. 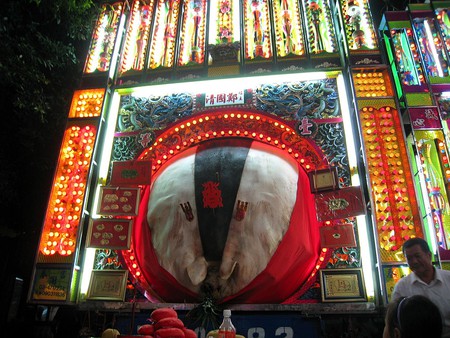 Do visit a temple

When evil is at the door, most people turn to their faith, and in Taiwan, it’s no different. Visit a temple, make some offerings, and ask the local deity for protection.

Do wear a protective amulet

An amulet that depicts Chung Kwei (a God who rather enjoys slaying demons) provides an added layer of protection for those late night walks to the night market.

Do give to charity

You should really do this all year but during ghost month it’s encouraged even more so as building up good karma can help keep bad luck at bay.

Do set a table outside your home

These offerings can be seen throughout the year on various auspicious days of the lunar calendar, but during ghost month you’ll see them a lot. The offerings are said to appease the spirits, and it’s okay to eat them later. 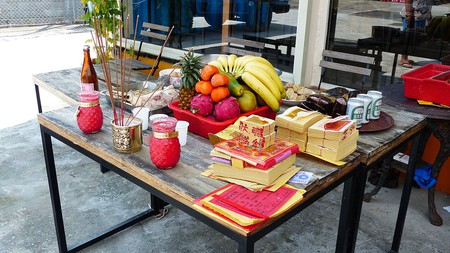 Offering for the spirits | © 玄史生 / Wikimedia

People also burn ghost money or joss paper in front of their homes during this time, but there’s an ever growing belief that we must refrain from doing so due to the pollution caused. If you must burn some, then head to the local temple and do it there.

While for most tourists, Ghost Month is an oddity, people in Taiwan take it very seriously. So when a local friend or neighbor gives you a friendly warning about something you shouldn’t do, accept the advice graciously and try to follow their instructions; you never know, they may just save your mortal soul.