The Best Things to See and Do in Taiwan in Spring

Cherry Blossoms | © Yangchen(TW) / Flickr
Spring is one of the most enjoyable seasons here in Taiwan and not just because of the warmer weather and the blossoming flora. The season is also a time of many cultural events and festivals that can make a trip one to remember. Here are some of the most interesting that you really should have on your itinerary.
Last week of April – first week of May In a quiet neighborhood in Kaohsiung City you’ll find one of the most intense and energetic martial arts displays on the planet. The Song-Jiang Battle Array is a military-style festival that comprises 18 parades in which locals show off their martial talents. Originally a display of power by villagers that wanted to protect their homes, the festival is now one of the most popular martial arts festivals in Asia. 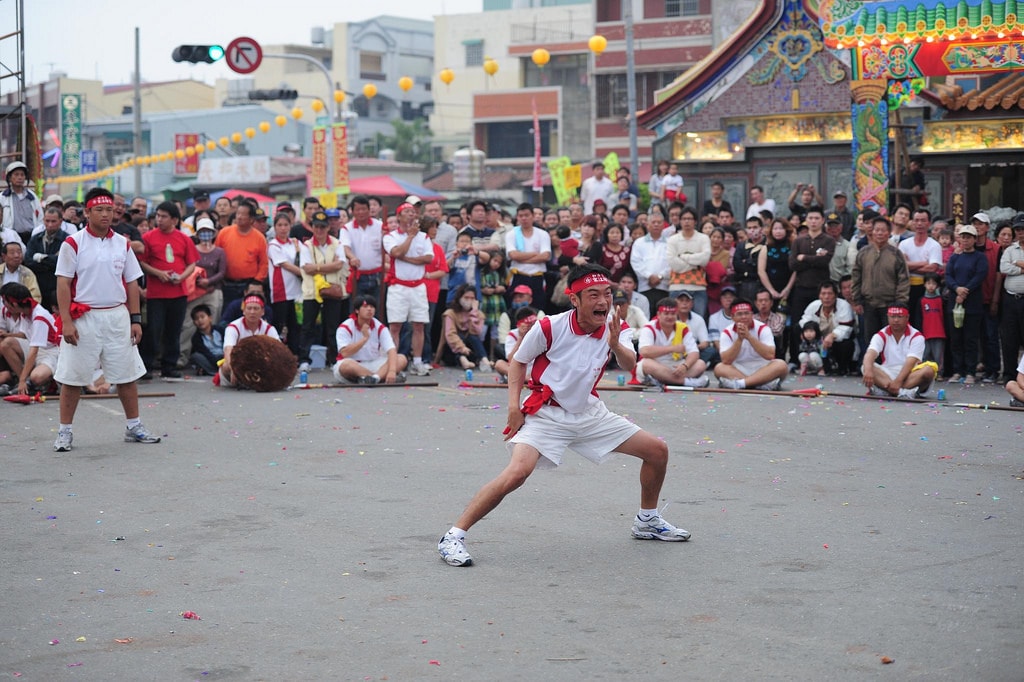 The third month of the lunar calendar (usually April or May)

The birthday of Taiwan’s most popular Goddess Mazu sees pilgrims carry a statue of the deity for 300 kilometers through four cities. It’s an incredible undertaking and takes about nine days to complete, but you don’t have to follow the pilgrimage to enjoy this festival. The central west coast city of Taichung is by far the best place to enjoy this spectacular show of faith. Fireworks, parades, performances, and of course lots of food mark the Goddess’s passage through the city. Whether you’re a believer or just a tourist, this is an amazing experience that UNESCO recognizes as a living heritage.

Music Venue
Spring Scream | © camilo gomez / Flickr
The first weekend in AprilOne of Taiwan’s most famous music festivals, Spring Scream has been on the go since 1995. It’s a small festival with live bands and DJs performing in idyllic locations in Kenting. It’s a really popular event for young people although in recent years the festival has become a little more family-friendly. If you want to go however, you will need to book a hotel very early as places sell out very fast once the festival dates and lineups are announced.
More Info
Open In Google Maps
301 Eluan Road, 946, Taiwan
+886936220833
View menu
Visit website
Visit Facebook page
Send an Email
Give us feedback

Park
Penghu Fireworks Festival | © Mark Kao / Flickr
April – JuneThe Penghu Ocean Fireworks Festival is a relative newcomer to the scene with the first event taking place back in 2003. It was originally intended to boost tourism but has now become much more. Thousands of people flock to the islands each year to witness the incredible displays which run right through into the heart of summer.
More Info
Open In Google Maps
880, Taiwan
View menu
Visit website
Visit Facebook page
Send an Email
Give us feedback

Historical Landmark
April – MayIt sounds worse than it actually is. The Bunun Tribe’s Ear Shooting Festival is a rite of passage for the young men of the tribe. A deer’s ear is pinned to a wooden frame and boys and men must shoot the ear from a distance. This skill was said to be the true sign of a seasoned hunter, but these days it’s a simple and enjoyable ceremony that tourists are welcome to witness. But it’s not all about shooting ears, there are also other events such as pig hunting, wrestling, and archery and you can also buy some handicrafts from the tribe.
More Info
Open In Google Maps
953, Taiwan
View menu
Visit website
Visit Facebook page
Send an Email
Give us feedback

Shrine
April – JuneHere in one of Taipei City’s most historic neighborhoods you’ll find some incredibly well-preserved buildings with quaint houses and old fashioned stores. You’ll also find the city’s most popular temple dedicated to Baosheng. And this is where the annual Baosheng Cultural Festival is held each year. It’s both a religious and cultural event with a variety of performances and activities arranged throughout the festival that attract large numbers of tourists. It’s a great way to get a little insight into the workings of local religion and the customs and traditions associated with it.
More Info
Open In Google Maps
61 Hami Street, Taipei City, 103, Taiwan
+886225951676
View menu
Visit website
Visit Facebook page
Send an Email
Give us feedback

Natural Feature, Park
The calm waters of Sun Moon Lake | © tingyaoh / Pixabay
Book Now
March – AprilWhile Japan is often the go-to tourist spot for cherry blossoms, not many people realize that Taiwan is actually a great place to witness the yearly blossoming. The island is full of cherry blossom trees and you need only go to a local park to find yourself surrounded by these beautiful trees. But perhaps one of the best locations to take in the blossoms is Sun Moon Lake. Here there are hundreds of the trees throughout the area making for some incredible photo ops.
More Info
Open In Google Maps
555, Taiwan
View menu
Visit website
Visit Facebook page
Send an Email
Give us feedback
Book with our partner and we will earn a small commission.
Give us feedback