A café in Taiwan is offering visitors the unique experience of eating with alpacas. The South American herbivores wander through Oia Café, investigating guests and snacking on carrots – which the café provides for anyone who wants to feed the animals between sips of coffee.

Oia Café is located on the coast near Taipei, Taiwan’s capital, and offers a standard range of teas and coffees, plus waffles and baked rice dishes – but it’s the animal inhabitants that make it unusual. As well as a cat, they have alpacas. They’re docile but inquisitive, and unsuspecting diners may find them eyeing up food or magazines as they stroll the café. More alpacas live in a small farm area out back, alongside a goat and deer. 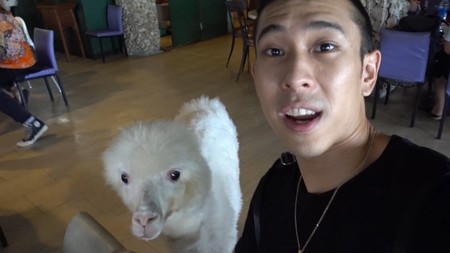 Taiwan is home to the world’s first cat café, but it’s the alpacas at Oia Café that are stealing the show | © Culture Trip

The lowdown on alpacas

Alpacas (along with their slightly larger cousins, llamas) are related to camels and are native to South America. They typically live at altitude in the Andes of Peru, Bolivia, Ecuador and Chile, and have been bred for their wool-like coats for hundreds of years. They’re social animals usually seen in the wild eating grass in small herds, but their adaptable nature means they can now be found on every continent except Antarctica.

While humans have kept animals for companions for centuries, animal cafés are a relatively new concept. In fact, Taiwan was home to the first, a cat café that opened in 1998, inspiring several Japanese imitators. The trend has since spread to countries around the world, with dogs, birds, snakes, lizards and sheep among the creatures giving customers more than just a caffeine boost.

The cafés have attracted controversy, with concerns over animal welfare, customer safety and whether it’s ethical to even keep animals for entertainment. Alpacas, which are generally docile and feature in petting zoos around the world, are relatively used to human contact.

The café is in Sanzhi District, north of Taipei, and near the forests and mountains of Yangmingshan National Park.