A Guide to Yangmingshan National Park 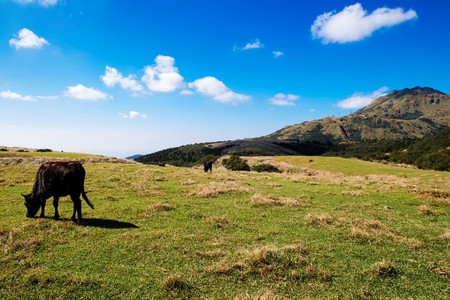 Located just a short bus ride from Taipei City, Yangmingshan National Park is one Taiwan’s most beautiful national parks, and is a popular sightseeing destination thanks to its hot springs and sulfur crystals. Here’s your ultimate need-to-know guide.

During the Qing Dynasty, the park was known as Caoshan (‘Grass Mountain’), as there were no trees for miles. Apparently, this was due to the local officials’ fear of thieves stealing sulfur, which led to the burning of the mountain and the absence of trees. In 1937, it was named Daiton National Park by the Japanese Governor-General of Taiwan Seizo Kobayashi, and in 1950, Taiwan’s leader and Generalissimo, Chiang Kai-shek renamed the park Yangmingshan in memory of the Ming Dynasty scholar Wang Yangming. In 1962, planning finally got underway to create the park as we see it today. 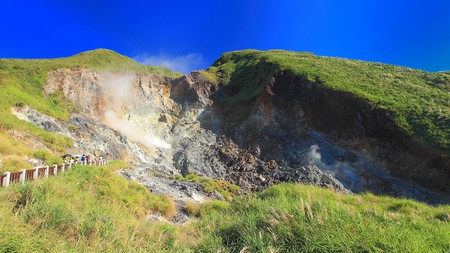 Certain roads in Yangmingshan are closed to traffic on the weekends, and so the only way you can make it up to the park is by bus. You can take the 260 bus from Taipei Main Station or the Red 30 or 208 from Jiantan MRT Station. These buses will drop you off at Yangmingshan bus station, and from there it’s a clearly signposted 700-metre (2,297-feet) walk to the visitor center.

However, if you go by car or scooter (on a weekday) getting to each of the viewpoints is far more convenient. Plus, you can drop into one of the many restaurants in the area.

There are no admission fees to Yangmingshan National Park, although if you’re driving, you will have to pay for parking in some of the official car parks.

There are quite a few scenic spots in the park, and visiting them all in a day would take a lot of effort (and a car for convenience). Here are some of the most popular:

Built in 1969, this was a summer home for former president Chiang Kai-shek and as such is an important historical site in the park. It is also known as Zhongxing Guesthouse and is an interesting stop for those interested in the history of the park.

This area is where visitors head to see the steaming vents and sulfur deposits. There’s a very strong smell of rotten eggs here, but you get used to it pretty quickly. This is where you’ll find the trail which leads to the top of Mt. Qixing, the park’s highest peak. This trail offers the best view of downtown Taipei.

The land here is lush and green with forests lining this quiet valley. There is a nice path through the area and some ponds where you’ll see lots of dragonflies. This is a very popular spot for plant lovers as there’s a great range of flora on show. Erziping is located right next to Datun Nature Park.

Datun Nature Park is home to a visitor center that hosts an exhibition on early human life in the park. The area has been replanted and restored to create a wonderful spot where, like Erziping, plant and insect life is abundant.

A cold, hot spring? Well, although it’s named as one, the temperature of the water isn’t quite cold, just not as hot as other hot springs in the area. Here there’s an indoor bathing area that is usually busy no matter what day you arrive. It’s a nice place to soak your feet after a long hike.

This is, without doubt, the most popular area of the park as it’s also the place where you can enjoy views of the city without having to hike too far. The grasslands are green and lush, and there are a few cows that wander around grazing. There are also a few short trails that start from the visitor center here.

Trails are accessible from each of the scenic spots except Yangminhshuwu. Each area has good signage and maps explaining the trails and while none are too difficult, don’t underestimate the climate. Depending on the humidity, what should be an easy hike could turn out to be a bit of hard work. 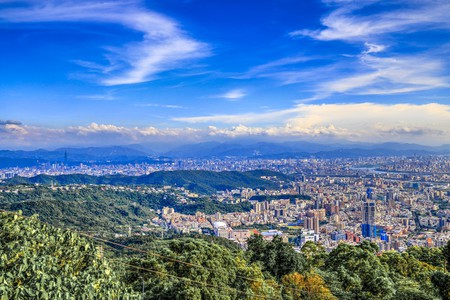 The park is actually well laid out, and the majority of the bus stops or car parks have a convenience store or vending machines of some sort nearby. You’ll also find a few cafés here and there. However, if you’re taking one of the hiking trails, don’t go unprepared. Bring plenty of water (especially in the hot summer months) some snacks, and some mosquito repellent. A good hat and some sunscreen is also a great idea as some of the trails have very little shade. You should also bring a windbreaker as the weather can be a little windier and chillier than it is down in the city. And a camera – don’t forget the camera!

If at all possible, head for the park during the week. At the weekends, the park is full of day trippers out of the city, and having scores of people joining you on the trails kind of contradicts the idea of getting away from it all. During the school holidays, the park can also be quite busy any day of the week, but the hiking trails will usually be quiet enough.