Warriors of the Rainbow: Seediq Bale is a film by the highly acclaimed Taiwanese director Wei Te-Sheng. This historical film addresses sensitive issues of cultural identity and pride among the aboriginal people of Taiwan. 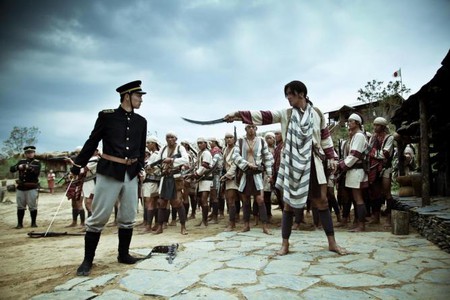 As the saying goes, marginalized peoples and events end up in the ‘dustbin of history’. The latest film by Taiwanese director Wei Te-sheng (Cape No. 7, 海角七号), Warriors of the Rainbow: Seediq Bale suggests that history is a far more dynamic object.

On 9 September 2011, Wei’s Seediq Bale opened in Taiwan to record-breaking opening-day profits. The film focuses on the Wushe Incident, an uprising of the Seediq aboriginal people against Japanese rule that began in October 1930. Covering an overlooked piece of Taiwanese history, eighty years after the uprising, the story of the defeated continues to be told — it is the first major Taiwanese film to focus on the aboriginal people.

Wei’s film tells the story of Taiwan’s native Seediq people during the Japanese rule of Taiwan, from 1895 to 1945. For twenty years, resentment simmered between the Seediq and the Japanese overlords as the Seediq suffered from labour exploitation and the eradication of their cultural practices and identity.

The resentment exploded in the Wushe Incident, a brutal uprising of the Seediq against their Japanese overlords in 1930. In October 1930, the Seediq attacked and brutally slaughtered scores of Japanese men, women, and children. In retaliation, between October and December, hundreds of the Seediq rebels were massacred.

But what appears to be a moment of posthumous triumph for Taiwan’s aboriginal peoples becomes far more complicated when one looks at the details. 98% of Taiwan’s population is Han Chinese; only 2% are aboriginal. Some critics have noted the nationalist undertones of the film and have asked: Why is Taiwan’s Han population — with its own history of marginalising the native — so fascinated by this film? The enormously positive reception of the film in Taiwan suggests that Seediq Bale is no longer only about the Seediq people. Instead, it has merged with hypersensitive questions of Taiwanese identity and nationalism that have dominated Taiwanese politics and cross-straits relations between mainland China and Taiwan at least since 1949.

Depicting the dramatic struggle for independence of Taiwan’s aboriginal Seediq people, Warriors of the Rainbow: Seediq Bale was screened at the 68th Venice Film Festival and competed for the 2011 Academy Award for Best Foreign Language Film.