A Guide to Cijin Island, Taiwan 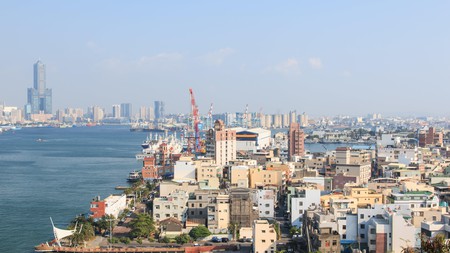 Arm yourself with a camera, swimsuit and savour the many quirks of Cijin Island. | © agefotostock / Alamy Stock Photo

Known for its black-sand beach, Instagrammable modern art and fresh seafood, Cijin Island is a popular day trip for both locals and tourists in Kaohsiung.

A sliver of land opposite Kaohsiung Harbour, Cijin is known less for specific attractions and more for its laid-back, beachy vibe. Besides Zuoying, this is Kaohsiung’s oldest neighbourhood, and it shows in the atmospheric ruins of Cihou Village and the presence of Tianhou, Kaohsiung’s oldest temple. Whether you go by scooter, bike or foot, this is not a place to be rushed. Arm yourself with a camera, swimsuit and plenty of sunscreen, slow down and savour its many quirks.

Getting to (and around) Cijin Island

Cijin is reached via ferry from Gushan Pier. Pick up an EasyCard (sold in most metro stations and shops) prior to your trip, as you can use it on both the metro (the KMRT) and the ferry. From Sizihwan metro station, it’s an easy ten-minute walk then five-minute ride to the island. Pedestrians take the top deck of the ferry, while bikes and scooters take the bottom deck – if you’re a pedestrian, take a spot over the gangway to watch swarms of scooters whizzing onto the boat. From the water, the views of Kaohsiung’s skyline are spectacular – look out for the architecturally implausible 85 Sky Tower looming over the city. Once on the island, you can either walk or take a bike or scooter – many stores on Cijin rent them out at reasonable rates, and there are 15 kilometres (9 miles) of cycle paths to take advantage of. 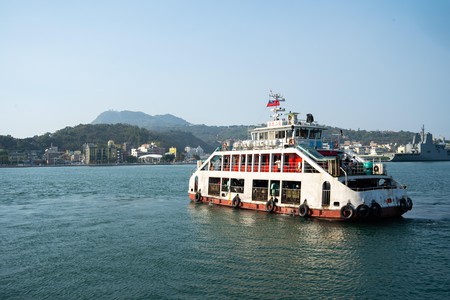 What to do once you’re there

Eat all the seafood

It’s well known among Taiwanese that Miaocian Road (otherwise known as “Seafood Street”) has the best seafood in Kaohsiung and possibly in the country. It doesn’t really get going until the afternoon, but once it does, you can chow down on all the shrimp, fish, squid and clams you can eat. Food is pricier here than on the mainland, but worth it for both the taste and the spectacle of vendors using giant paintbrushes to baste skewers of sizzling squid in sticky soy marinade. If you’re after something sweet, there are also stalls selling steaming bowls of red bean and taro dessert. If you have time, also check out Qihou Market further east for a Taiwanese speciality: dried fish. Be warned, though: the smell can be overpowering. 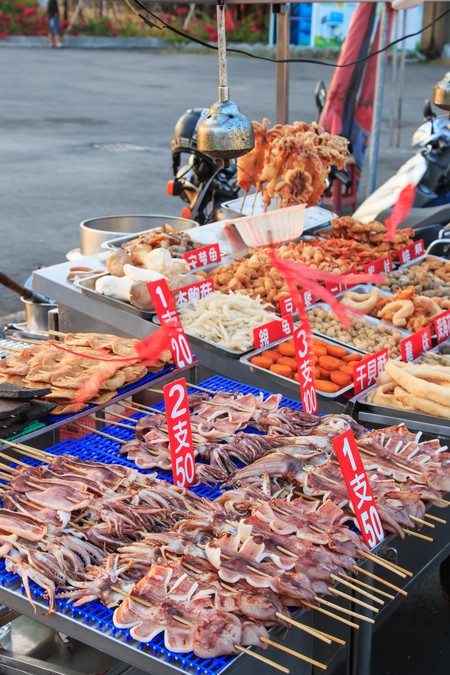 Blackened by centuries of incense smoke, Tianhou is Kaohsiung’s oldest temple. Built in 1673, it is dedicated to the Chinese sea goddess, Mazu – legend has it that a fisherman established the temple here as a symbol of gratitude after a chance landing on the island saved him from a typhoon. Its exquisite interior houses wooden relief sculptures, mosaics and decorative paintings by 20th-century realist Chen Yu-Feng. Outside, a pair of dragons forms a protective arch over the temple, while two diminutive stone lions guard the door. 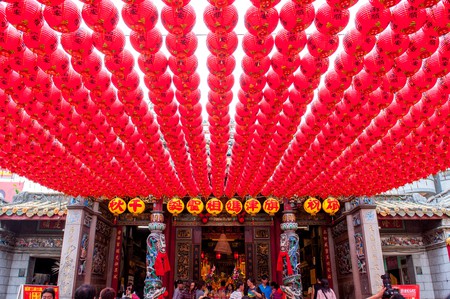 Savour the views from North Cijin

At the island’s highest point, the stark white Baroque Cihou Lighthouse offers fabulous views over Kaohsiung Harbour. Built by the British in 1883, it was augmented several times by the Japanese during their occupation, most notably by the octagonal tower that now stands next to it.

A few hundred metres south is the handsome red-brick Cihou Fort, built in 1720 to defend Kaohsiung Harbour and rebuilt in 1991 after its partial destruction in World War II. Look closely to see Chinese characters and depictions of bats on its surface. 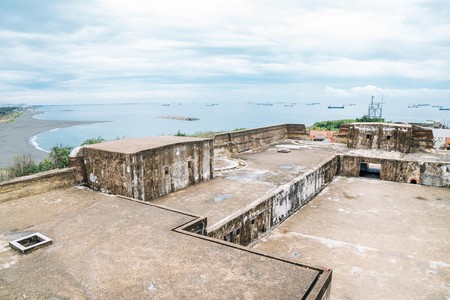 See the stars in a Japanese military tunnel

Passing under Cihou Mountain, the Cijin Star Tunnel began life as a military tunnel dug by Japanese colonists; it’s now been refurbished for tourists with a wooden-plank path and glow-in-the-dark constellation paintings. From Cijin Beach, it’s a two-minute walk through the tunnel to the pier and beautiful views across the ocean. 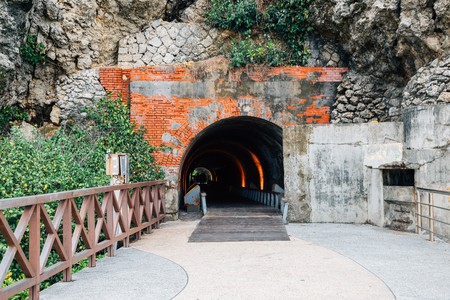 Swim, surf or sunbathe on a black-sand beach

A slice of palm-lined calm among Cijin’s urbanised jumble, Cijin Beach is a popular escape for city dwellers. The grey-black sand is soft to the touch, and strong waves provide good surf (check out the Cijin Surfer Inn for lessons). If you’re going for a swim, pay attention to safety notices – there can be dangerous riptides here. 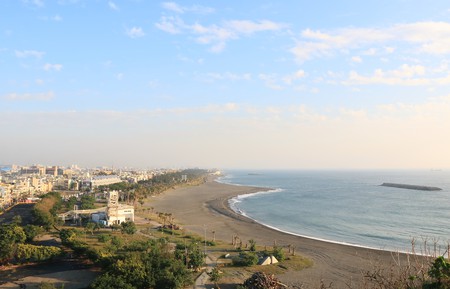 Popular with the Instagram crowd, the Rainbow Church and Rainbow Arch on Cijin’s south side make for wonderful photos with their bold colours and harmonious geometry. Farther down the shore is a sculpture of comically huge mosaic trumpets – put your ear up against them to hear the ocean amplified. 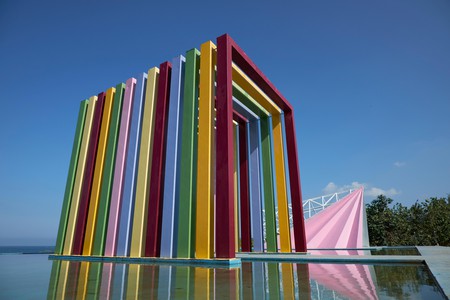 One of Cijin’s weirder attractions, the Shell Museum houses around 2,000 shellfish in total, including 200 types of crab. After browsing the exhibition, check out the enormous, oyster-like “Sea Pearl” outside, a photogenic installation that reflects one’s own voice back at them. 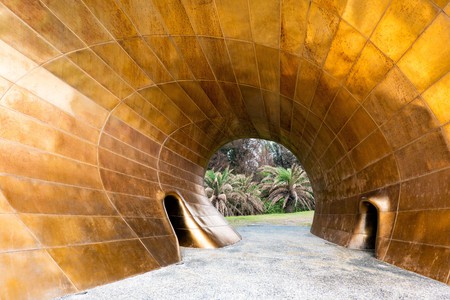 Chill out at the Turbine Park

True, some visitors are a little bemused to hear that a row of seven wind turbines is promoted as one of Cijin’s star attractions, but if you’ve already witnessed the strangeness of the Rainbow Church and Shell Museum, we recommend just going along with it. It’s all about the vibe, after all. The turbines power the lights of the surrounding park, and there’s a sea-viewing platform and a collection of cute mosaic sea critters to take photos with. 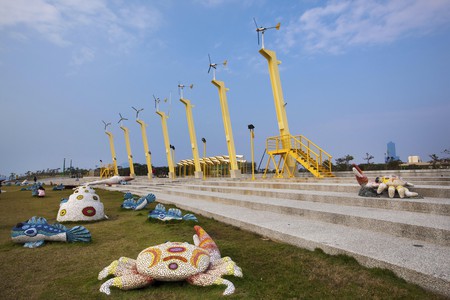 The Turbine Park is often touted as one of the island’s top attractions, though it’s not entirely clear why | © Top Photo Corporation / Alamy Stock Photo
Give us feedback