A Brief History of the Nose Flute 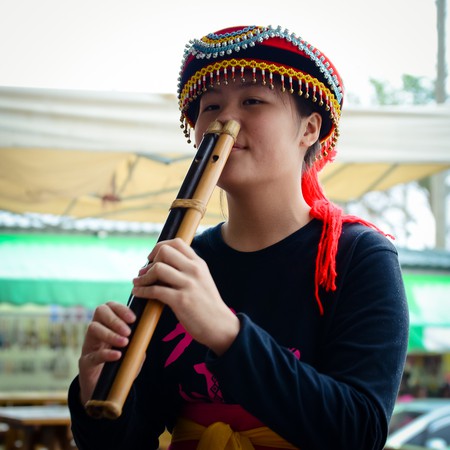 The nose flute has played an important role in the history of many of the Austronesian peoples and their tribes. But however popular this simple instrument is throughout the world, there’s something very special about the nose flute played by the indigenous people of Taiwan. For it is only among Taiwanese aboriginal tribes that you will find the rather unique twin-pipe nose flute.

Although the twin-pipe nose flute is an integral part of the culture and history of many of the region’s indigenous people such as the Rukai, Amis, and the Pinuyuman, it is the Paiwan tribe that is most famous for rekindling interest in this historical instrument. In fact, the Paiwan is the one tribe on the island that boasts a large number of teachers and students of the nose flute.

Traditionally, tribes did not allow women to play the twin-pipe nose flute, with only the men allowed such an honor. As warriors of the tribe, the men would not want to reveal their vulnerable side by crying or showing too much emotion in public. So in times of mourning or sadness, the twin-pipe nose flute was the perfect conduit to express their sorrow. But even though the notes are often melancholy, this is not to say that the instrument was reserved for times of sadness.

Being allowed to play this revered instrument was a great privilege and men who played were always either great warriors or men of noble rank. And so when the tribe’s nobility would marry, the men would play their nose flutes as a sign of respect for the newlywed couple.

It’s also worth noting that playing the twin-pipe nose flute takes quite a lot of effort and skill. And with so much air required to hit the right notes, the Paiwan believed that a man who could play the nose flute into his old age was incredibly healthy.

However, as time went by, fewer men played the nose flute, and there was a danger that its mournful music would be lost forever. But a new generation of eager musicians, most notably Sauniyaw Tjuveljevelj of the Pingtung Paiwan community, saw the need to break from tradition and allow both men and women take up the nose flute.

By simply allowing women and children to play, the tribes have managed to preserve this truly unique instrument for future generations. And with many children now taking up the instrument, it has returned to its rightful place, playing an integral role in the culture of Taiwan’s indigenous people.