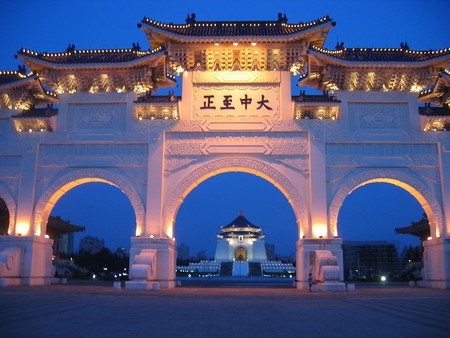 The entrance to the park | © Jiang / Wikimedia

Chiang Kai-shek Memorial Hall is without doubt, one of the most popular tourist destinations in Taiwan. Regardless of the fact that it is a memorial to a former military leader and president, it’s actually a pretty impressive building and well worth a visit. However, it is a divisive monument as some locals feel that it’s time to move on from a past that was dominated by military rule.

Chiang Kai-Shek Memorial Hall (National Taiwan Democracy Memorial Hall) was made to celebrate the long-serving and first president of Taiwan, Chiang Kai-Shek. Construction on the hall started in 1976, a year after President Chiang passed away. Designed by C.C. Yang, this historic landmark was opened in 1980 as a feature of a national park and assembling area. Originally intended as a memorial, it has become so much more in the decades since. 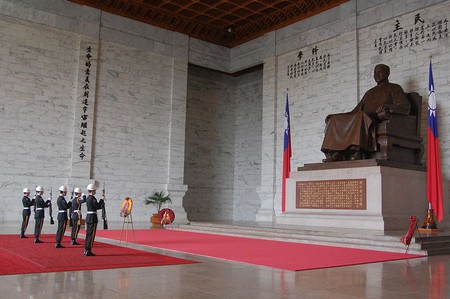 Changing of the guards | © edwin.11 / Wikimedia

Chiang Kai-shek is known by various names. His official name is articulated Jiang Jieshi (in Cantonese ‘Chiang Kai-shek’), and additionally, the name Zhongzheng was most normally used to indicate Chiang Kai-shek. The Chinese name of the memorial hall is in reference to this version of his name, likewise the endless Zhongzheng Roads throughout the island. The name of the square is formally Liberty Square, as indicated over the front entrance. However, the name change was a political one, and many people still know the whole complex as CKS Memorial Hall.

The octagon-shaped white building rises 76 meters high and is topped off with blue tiles and red accents which are also the colors of the national flag. The building has a total area of two hundred and fifty thousand square meters. The eight sides are a nod to the belief that 8 is a very auspicious number.

You can learn more about the man himself

Underneath the hall is a gallery archiving Chiang’s life and career. Here you can also see displays about Taiwan’s history, pan-Chinese civilization and history, and the ROC’s progress after moving to Taiwan.

Check out the Presidential cars

At the legacy showroom, visitors can see authentic records, important protected photos, and old items used by the former President. You can even see some of the Presidential cars once used for state business.

It’s a gathering place for the older generation…

Walk the covered pathways around the memorial and visitors will find quite a lot of older locals playing instruments, singing traditional songs, and even dancing. The walkways are the perfect place to get out of the hot sun and the stone benches, while pretty hard to sit on, are wonderfully cool.

…and the younger generation too

Visit the park at the weekend or in the evenings, and you’ll see groups of school kids practicing their dance moves and playing music. It’s an interesting contrast to hear hip-hop music in the shadow of the national concert theater and the memorial itself while local kids body-pop across the pathways.