ASIA
/
TAIWAN
/
TAIPEI
/
Things to Do 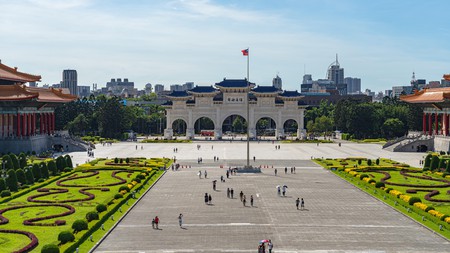 Make sure you watch the changing of the guard when you visit the National Chiang Kai-shek Memorial Hall, Taipei, Taiwan | © Kaedeenari / Alamy

Taipei 101 and night markets are attractions that come to mind when you mention Taiwan’s capital city. But there’s so much more to this vibrant city than the former tallest building in the world. From arty hubs to steaming craters, here’s our guide to where to go in Taipei. 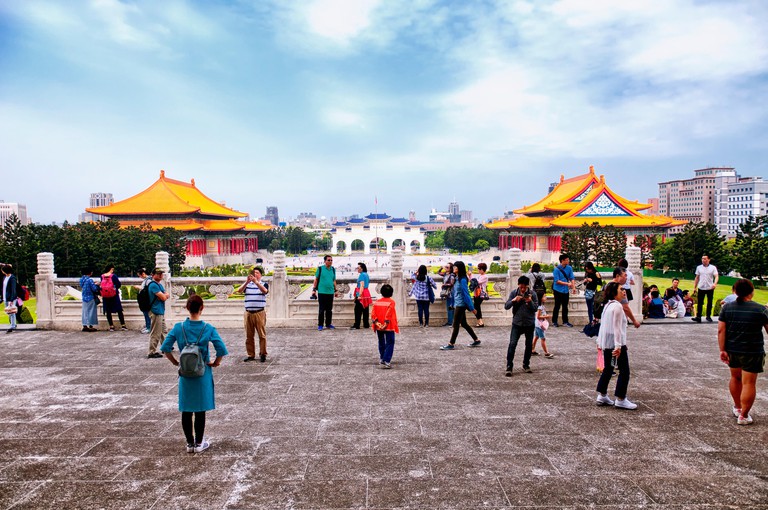 © Dan Hanscom / Alamy
Book Now
The 1970s monument to Taiwan’s former military and political leader Chiang Kai-shek is set in a quiet central city park on the east side of Memorial Hall Square. Most tourists come to see the changing of the guard in the main hall, where there is a large statue of Chiang Kai-shek. The ceremony happens on the hour from 9am to 5pm. 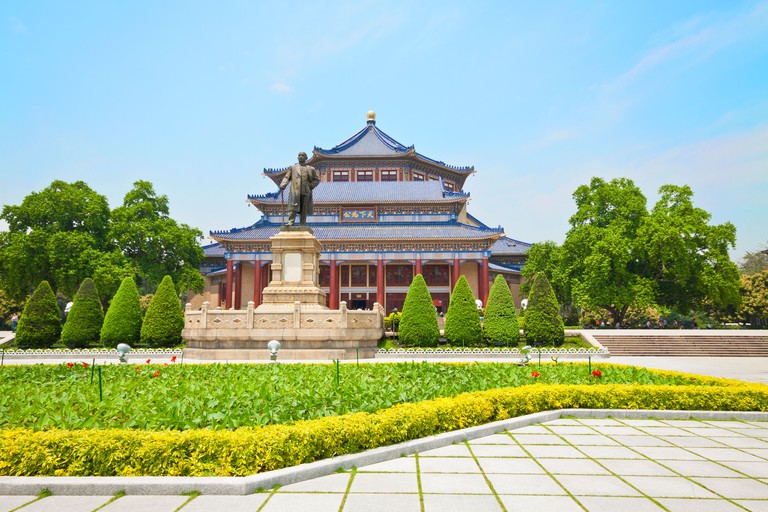 © YAY Media AS / Alamy
Dr Sun Yat-sen was the former leader of the KMT party and the first president of the Republic of China. The park surrounding the memorial hall is a nice place to relax in the afternoon, while the hall itself houses some of Sun Yat-sen’s personal items, as well as exhibitions about his life and the revolution he led in 1911. 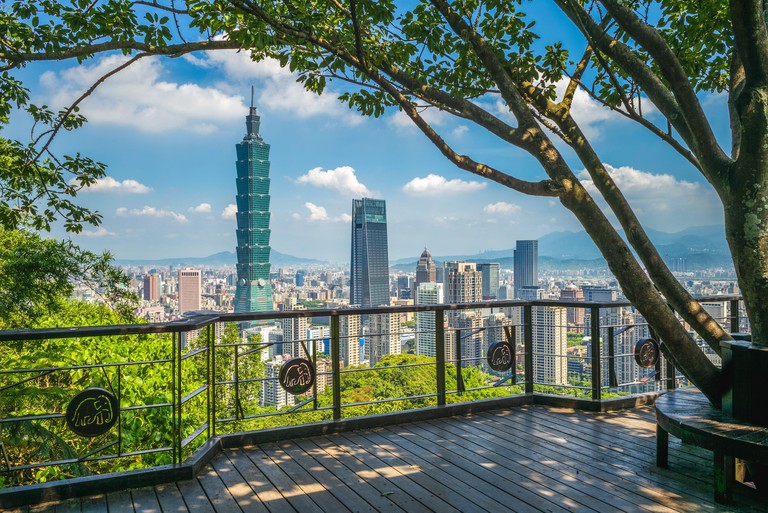 © Jui-Chi Chan / Alamy
Book Now
This is by far and away the best Taipei tourist spot from which to get a bird’s eye view of the city and the Taipei 101 skyscraper in particular. It’s a short and not too taxing hike to the top, which is a perfect location for taking a few snapshots of the city skyline. The peak, Xiangshan in Chinese, is 183m (600ft) high and has a 1.5km (1mi) hiking trail through the trees and ferns. 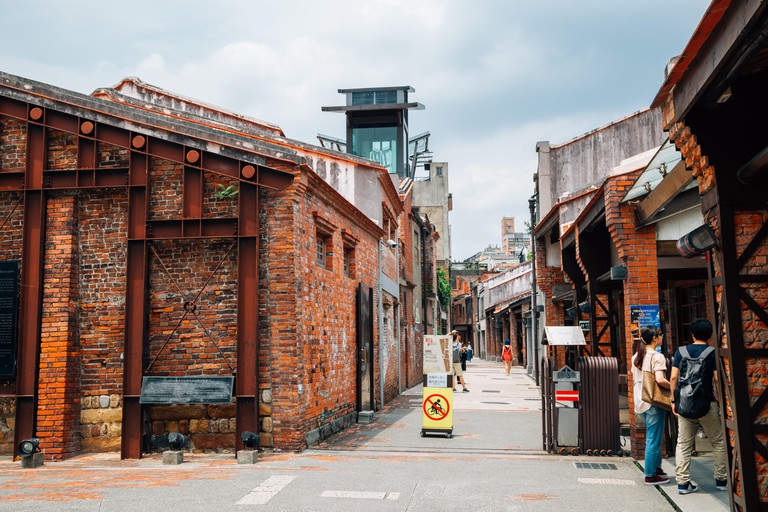 © sanga park / Alamy
This historical street, once part of a shipping centre during the Qing Dynasty, has been restored to its former glory. At the Heritage and Culture Education Center of Taipei City, now a museum, you can wander through reconstructed buildings, including a Chinese medicine shop and a school, complete with historical photographs. 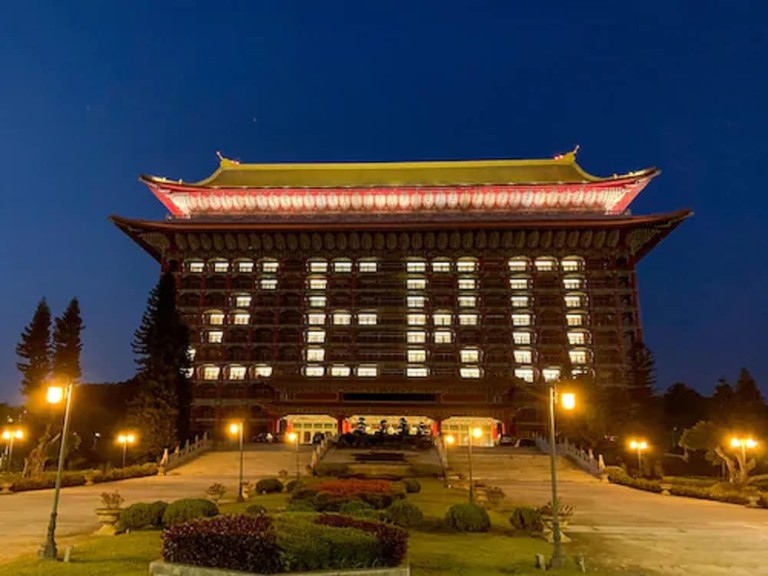 Courtesy of Grand Hotel / Expedia
View Rooms
The most famous hotel in Taiwan has hosted many foreign dignitaries, including Nelson Mandela and several former US presidents, although Eisenhower was the only one to visit Taiwan while he was in office. It’s a wonderful building with an historic feel. Even tourists who are not staying at the hotel come to enjoy afternoon tea and take photos of the impressive structure.
More info 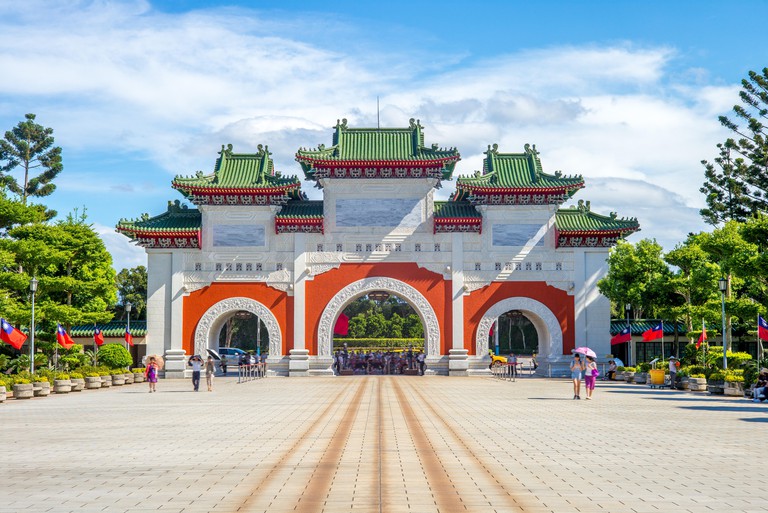 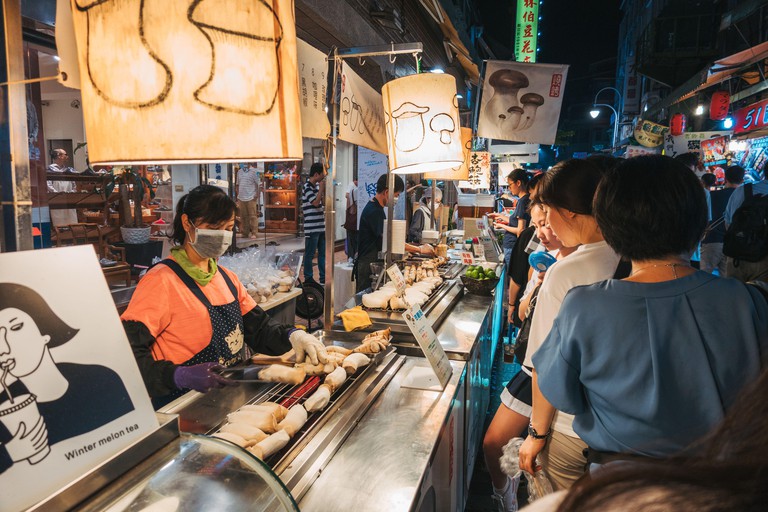 © Hugh Mitton / Alamy
Book Now
You can’t visit Taipei without taking a trip to a night market, and Shilin is the most famous of the lot. Its brightly-lit stalls offer everything from local street food and sweets to cheap clothing and kitchenware. There is a market hall with food stalls in the basement and the rest of the stalls cover a triangular area, with the Ming Chuan University Taipei Campus on one side and Bailing Senior High School on the other. 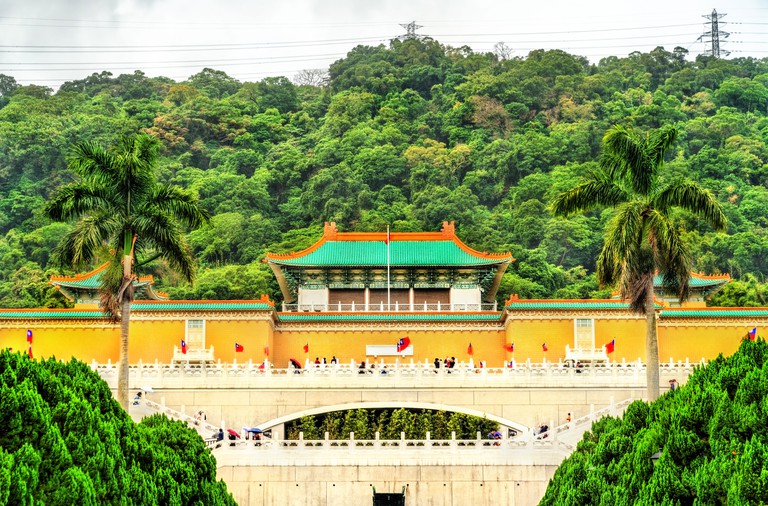 © Leonid Andronov / Alamy
Book Now
Home to the world’s largest collection of Chinese Imperial artefacts, the National Palace Museum is impressive with its permanent and visiting exhibitions. This is one of the only Taipei attractions where you can find rare Chinese ceramics, jade carvings and paintings dating back hundreds of years. 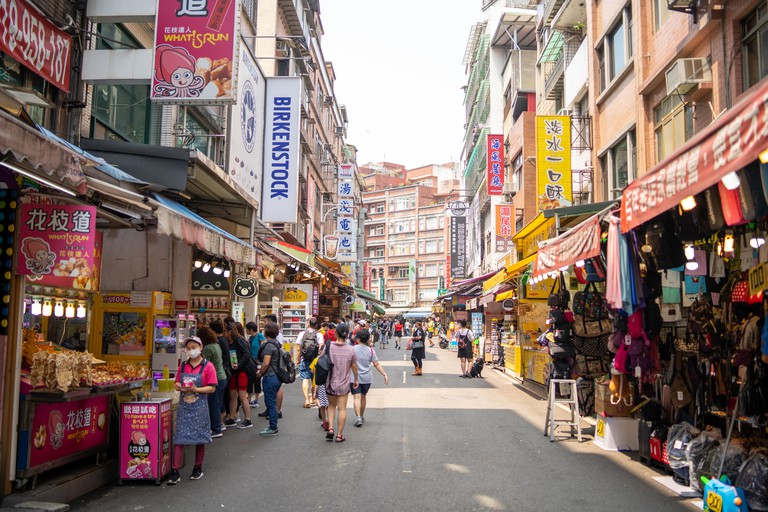 A wonderful street in the old fishing village of Danshui (which is now more of a town), Danshui Old Street ticks all the boxes for quaintness, food and souvenirs. One end of the street opens on to a wharf which is one of the nicest Taipei tourist spots to take in the sunset. 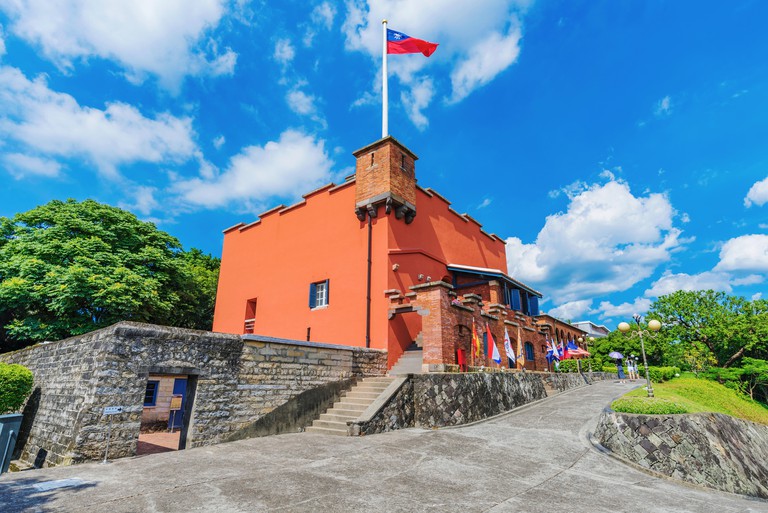 © Stockinasia / Alamy
Originally built in wood by the Spanish in 1628 and then rebuilt by the Dutch in 1644, Fort San Domingo is a relic of Taiwan’s colonial past. The Dutch were known as red-haired people by the Han people at the time they built the fort, which was fittingly nicknamed Fort Red Hair. The Qing Dynasty made repairs to the fort and it was leased to the British, who used it as an unofficial embassy on and off until 1972. It has been open to the public since 1980. 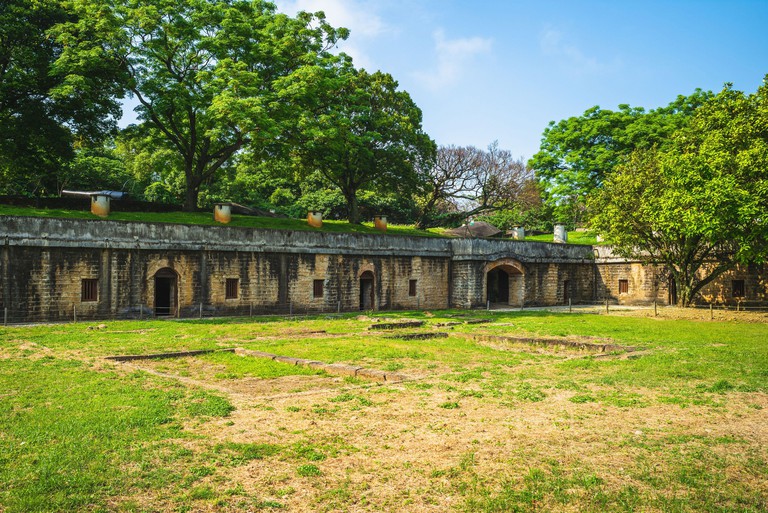 © Jui-Chi Chan / Alamy
Not too far from Fort San Domingo lies Hobe Fort. This solid military structure, finished in 1888, was never used in a war, but it is nevertheless an impressive building and has stood the test of time very well. 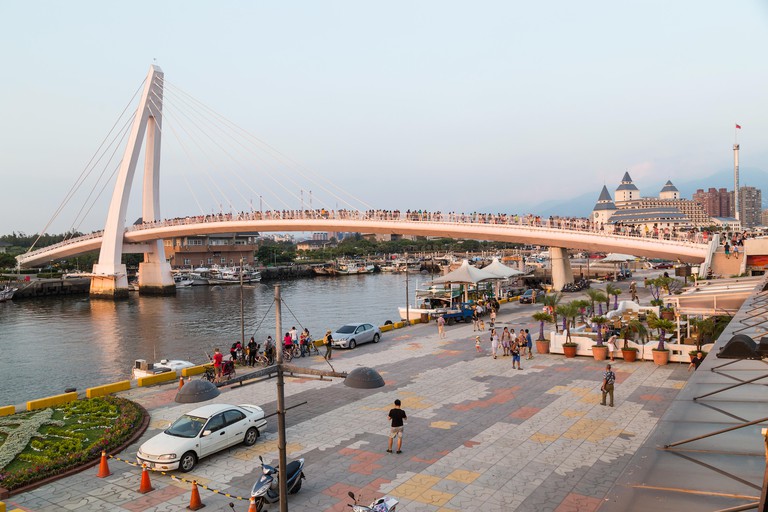 © ALAMTX / Alamy
Also in Danshui, you’ll find the Lover’s Bridge by Fisherman’s Wharf. The bridge, opened on Valentine’s Day 2003, is a nice place to take some photos and enjoy a spot of lunch in one of the many local seafood restaurants. 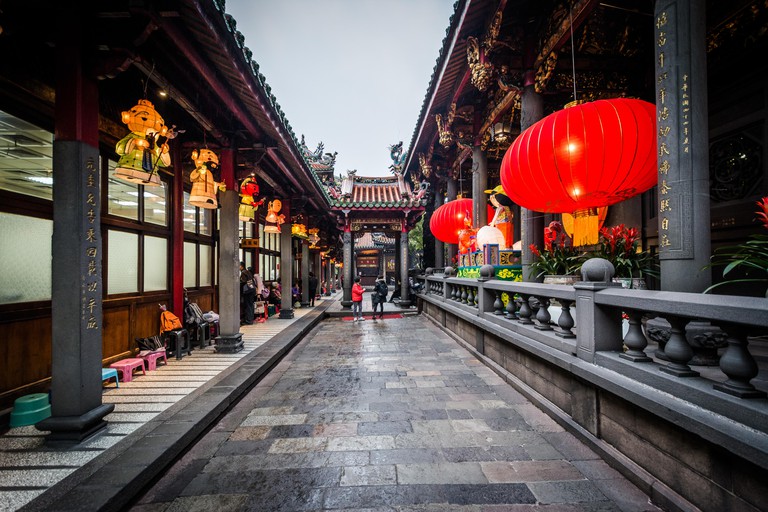 © Jon Bilous / Alamy
Book Now
Arguably the most famous temple in Taiwan, Longshan Temple has been either completely or partially destroyed by several earthquakes, fires, and a few wars, including World War II, when it was damaged by bombs. Each time, the building has been lovingly restored by the local community, although historic artefacts have been lost. The original temple was constructed in 1738 by settlers from Fujian, China, but was rebuilt between 1919 and 1924. 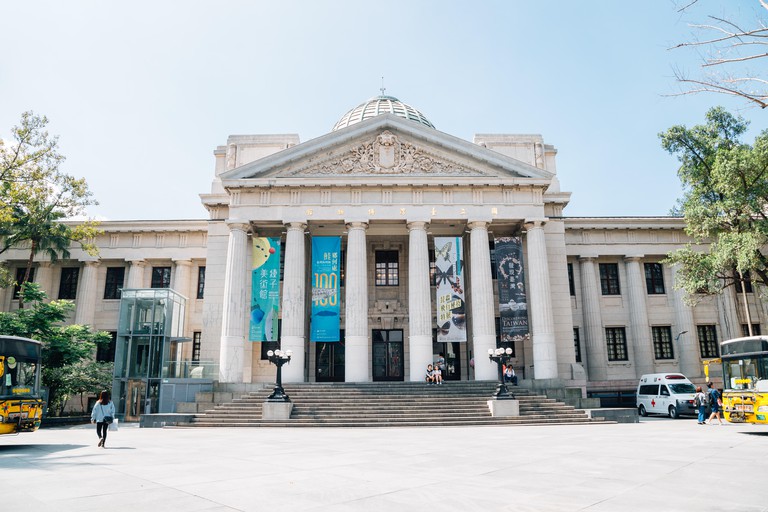 © Stockinasia / Alamy
The National Taiwan Museum is two separate buildings: the main wing is located in 228 Memorial Park, while the second building is across the street in a former bank. Both buildings are filled with interesting exhibits on the natural history of Taiwan and its indigenous tribes. When you’re finished here, you can take a walk through the park. 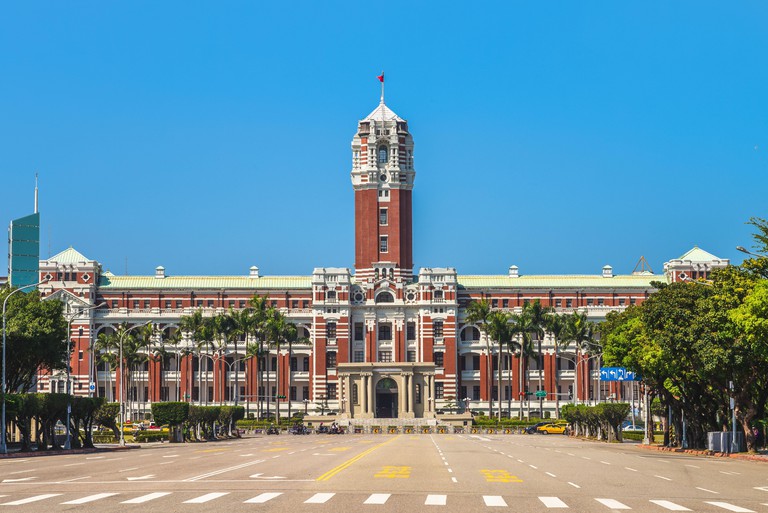 © Jui-Chi Chan / Alamy
The Presidential Palace, now known as the Presidential Office Building, was built between 1912 and 1919, during the Japanese colonial period, and is an impressive feat of architecture. It houses the day-to-day working office of the president but you can tour parts of it, including exhibitions on democracy in Taiwan. 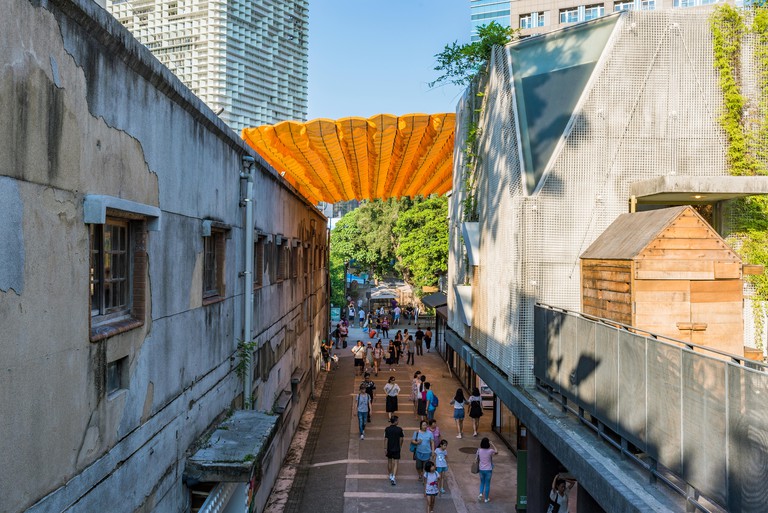 © Stockinasia / Alamy
Set in a former winery that opened under Japanese rule, this creative park is now home to a variety of shops, cafes, restaurants, and exhibition halls. Here, you’ll also find a lot of local craft and artworks for sale, such as wood sculptures and paintings. Writers, theatre producers and film directors have used the park to showcase their talents. 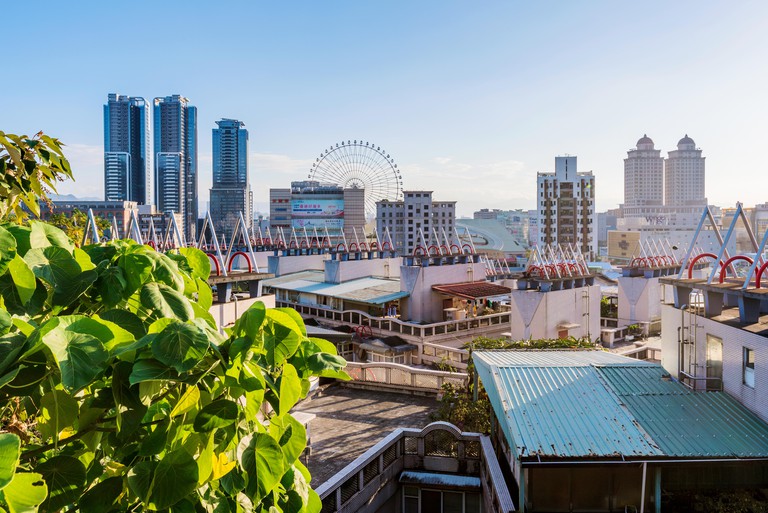 © Stockinasia / Alamy
Book Now
The Miramar Ferris Wheel, which is 70m (230ft) tall, offers a wonderful view of the city. It’s on the roof of the Miramar Entertainment Park, giving an extra boost to the vista. The park itself contains a department store and an IMAX theatre with a massive screen. 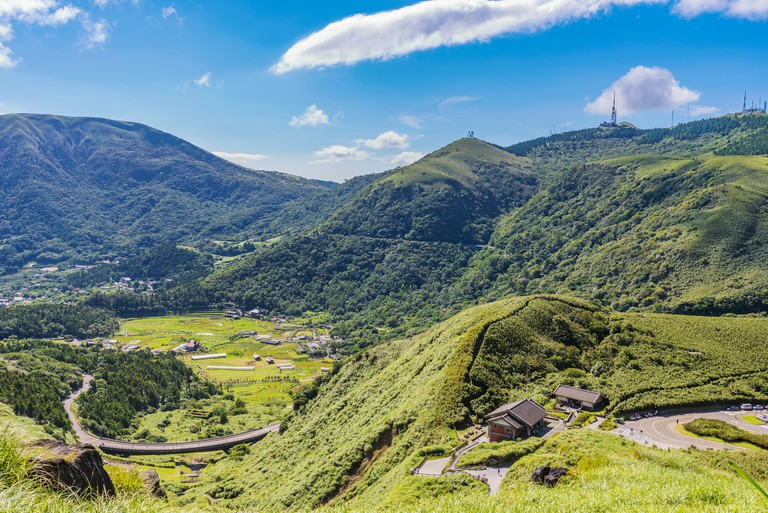 © Stockinasia / Alamy
Book Now
If you ask people in Taipei where to go for fresh air and dramatic scenery, they’re bound to recommend Yangmingshan, just outside the city. It’s a wonderful day trip. The park has plenty of hiking trails and there are even some fumaroles where you can see steam rising from vents in the ground. 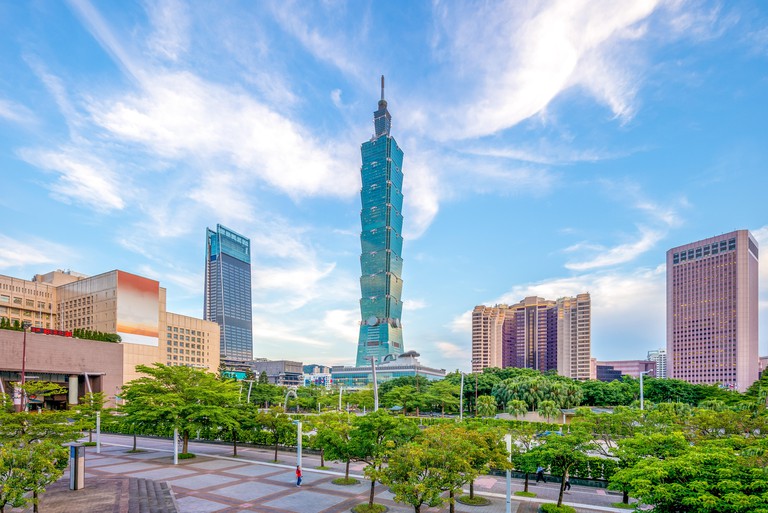 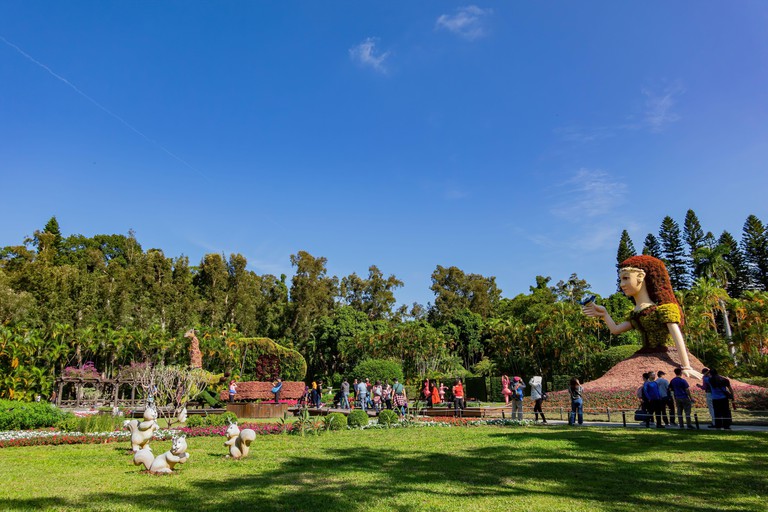 © Chon Kit Leong / Alamy
The former president’s official residence is set within beautiful botanical gardens and is now open to the public, after years of restoration work. The building is full of interesting items that once belonged to both Chiang Kai-shek and his wife Soong Mei-ling, who was known as Madame Chiang.
Give us feedback