The Best Hiking Trails in Taiwan 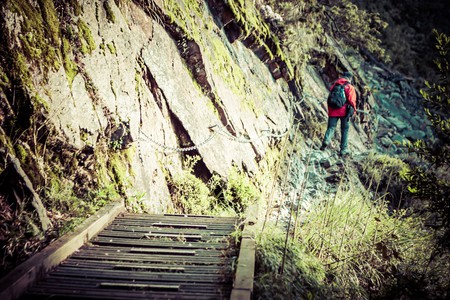 The Portuguese called it Formosa – the beautiful island – fringed with golden beaches, capped by snowy mountains and carpeted with rainforest slashed by gorges. Today, more than 20% of Taiwan remains protected in the form of a nature reserve or national park like Taroko, and the trekking is varied and magnificent. Whether it’s a short day trip just outside Taipei or an epic adventure through the rugged jade mountains of Yushan, there’s a yomp for all seasons. Here are the best hiking trails in Taiwan. 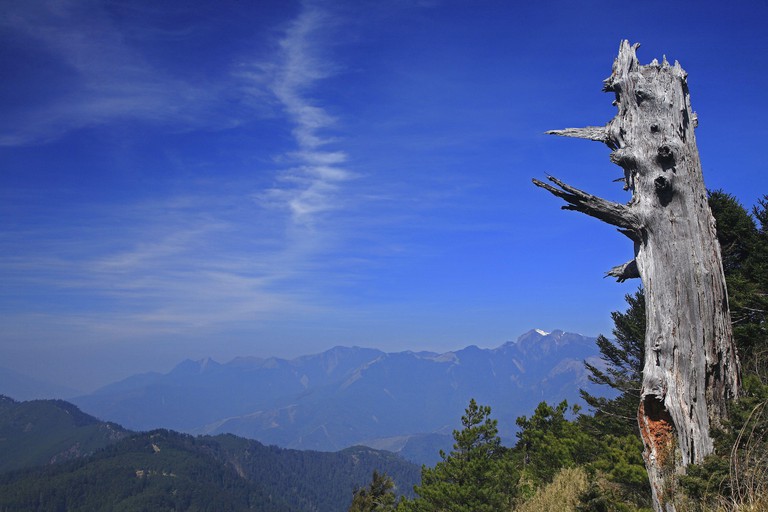 © Top Photo Corporation / Alamy Stock Photo
Craggy mountains, flower-filled valleys, sierras of winter snow – this hike through beautiful Shei-Pa National Park, in the northern mountains, is not for the unfit. It takes three to four days and traverses four mountain passes, but the scenery will have you snapping unforgettable pictures every few steps. Bring sturdy boots and light-but-warm clothing. Shei-Pa is 100km (60mi) outside the tropics – hot and sticky at low altitude but chilly above 3,000m (9,800ft).
Open In Google Maps
364, Taiwan
Give us feedback 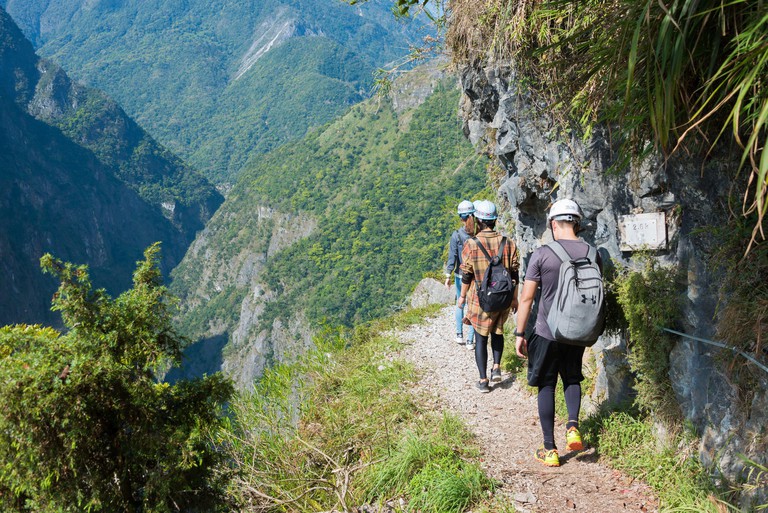 © beibaoke / Alamy Stock Photo
The steep-sided Taroko Gorge is unmissable territory for any visitor to Taiwan, cut by a rushing green river, with pagodas and Taoist temples poised on every other ridgetop. What’s more, this trail is gentle and easy to access. That said, it will still send your heart leaping: at one point the path cuts into a cliff, narrowing to a ledge just 60cm (24in) wide. The river is a vague ribbon that runs 500m (1,650ft) below, and the adrenaline rush is so heady that many hikers turn back.
Open In Google Maps
291號 富世, 972, Taiwan
+88638621100811
Visit Website
Give us feedback

Park
Facebook
Email
Twitter
Pinterest
Copy link
Share
Map View
This relatively comfortable overnight hike, on the southernmost mountain in Taiwan, takes hikers along a 10km (6mi) trail that hugs a high ridge, passing through misty forest with views over plunging gorges or seas of clouds. One of the most popular sights is a 1,000-year-old red cedar tree measuring an astonishing 25m (82ft) in circumference. The trail ends at the summit of the mountain with views of the Pacific that will take your breath away.
Open In Google Maps
Taiwan
Give us feedback 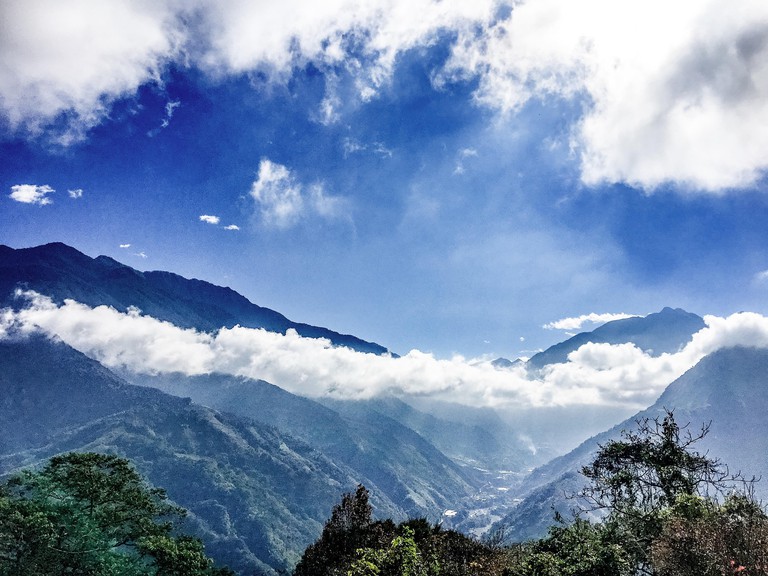 © felltie / Stockimo / Alamy Stock Photo
Weaving through the high mountains of Yushan National Park, the two-day Peaks Trail is one of Taiwan’s most popular. Down glacier-sculpted valleys and over dizzyingly sharp rock ridges, it makes for an easy walk through dramatic landscapes loaded with snow in winter. The sweeping views are of forested mountains dropping towards the distant Pacific. It’s worth waking in the dark on the second day – with an early start, you’ll make it to the final summit for sunrise.
Open In Google Maps
556, Taiwan
+886492773121
Visit Website
Give us feedback 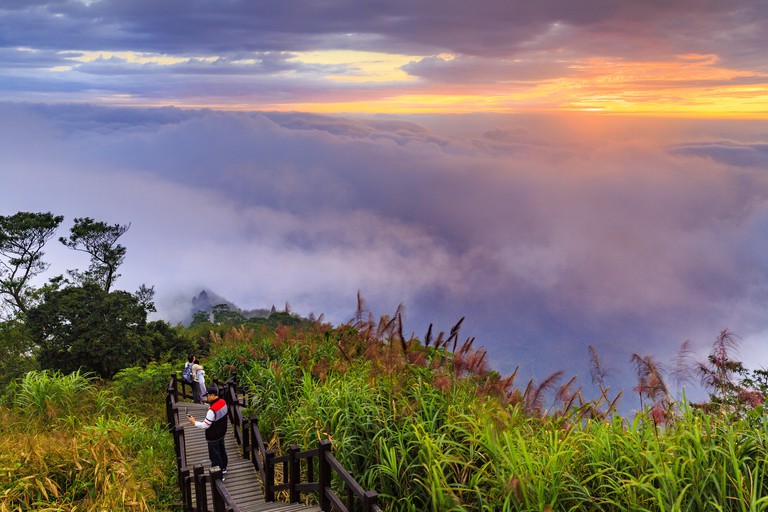 © Top Photo Corporation / Alamy Stock Photo
Book Now
One of Taiwan’s most photographed views is of the sunrise from the summit of the Alishan National Scenic Area. This gentle hike begins with a spectral in-the-dark climb through forest dripping with mosses and ferns, arriving at a viewing platform balanced high over the island. The sky turns from deep blue to pink as the sun rises over the horizon, illuminating a blanket of clouds that slowly dissipates to reveal the wrinkled, forest-covered mountains of central Taiwan.
Open In Google Maps
Alishan National Scenic Area, 605, Taiwan
Give us feedback

Hiking Trail
Facebook
Email
Twitter
Pinterest
Copy link
Share
Map View
The mountain views are dreamy, but this trail is not for the unfit or fainthearted: it hugs a narrow ridge, with cords strung along the path in place of handrails, and in places you have to scramble up steep slopes. The most difficult section requires a short, rope-assisted climb up a smooth rock face. If that hasn’t put you off, here’s the easy bit: the trailhead is a cinch to reach from Taipei on the metro (with a short cab hop) and can be done in a day.
Open In Google Maps
三峽, 新北市, 237, Taiwan
+886226711017
Visit Website
Give us feedback 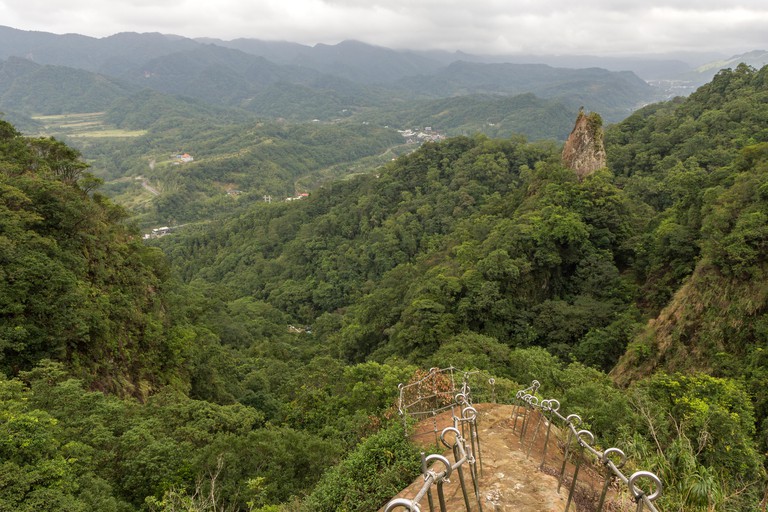 © Tuomas Lehtinen / Alamy Stock Photo
With sweaty scrambles through thick forest, rope-assisted climbs and steep trails, the Pingxi Crags are challenging, even for experienced hikers. The final section is a vertigo-inducing 45-degree clamber up steps cut into a knife-edge ridge with precipitous drops on either side, and with only wire cords for assistance. While a giant statue of Guan Yin, the Bodhisattva of compassion, sits praying next to the start of the ascent, the adrenaline rush and sweeping views make it worthwhile.
Open In Google Maps
New Taipei City, 226, Taiwan
Give us feedback

Hiking Trail
Facebook
Email
Twitter
Pinterest
Copy link
Share
Map View
This is an easy trail through lush, fern-filled forest, passing rushing mountain rivers and waterfalls, plunging into deep, cooling pools. The big reward is at the end: a long, restful soak in hot springs after the walk – this is what awaits you at the Linmei Shipan Trail in Yilan county. The trailhead is an hour’s drive (or two hours and 30 minutes by train (via Jiaoxi Train Station) from central Taipei. But to miss the crowds, come during the week and avoid public holidays.
Open In Google Maps
Linwei Road, Taiwan, 262, Taiwan
Give us feedback 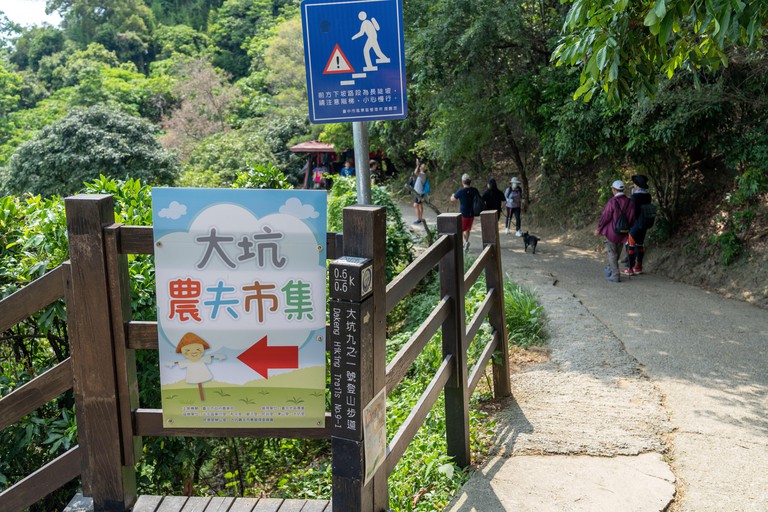 © Kaedeenari / Alamy Stock Photo
The most varied of the 10 trails through Dakeng, this half-day trail packs a lot in: cutting through verdant forests, winding round hillsides and advancing along the crests of steep ridges. There are beautiful views over a rippling landscape of mountains and valleys, and the trailhead takes less than an hour to reach from Taichung by car. But the adventure itself is hard work: steep and demanding, with log staircases and boardwalks that look pretty but hamper easy walking.
Open In Google Maps
台中市, 406, Taiwan
+886422289111
Give us feedback 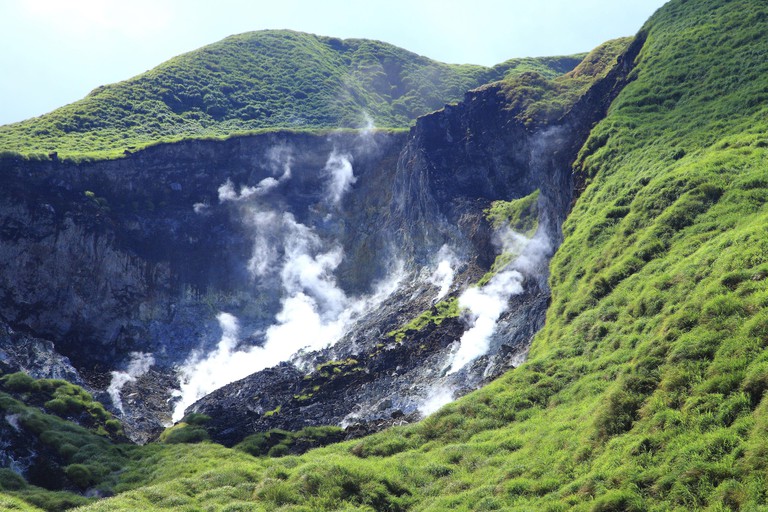 © Top Photo Corporation / Alamy Stock Photo
Just a few kilometres north of the National Palace Museum, this walk is easy to get under your belt in a day from Taipei on well-signposted paths. Most of the trail is exposed – running through grassland, past the sulphurous, steaming fumaroles at Xiaoyoukeng, over rocky hillsides and eventually reaching the 1,120m (3,675ft) summit of Qi Xing Shan. This is the highest peak in Yangmingshan, and from here there are 360-degree views out over the hills and volcanoes to distant, tiny ships in the shimmering Taipei Basin. A special moment that lets you know you really have arrived.
Open In Google Maps
Taiwan
+886228613601
Visit Website
Give us feedback
Give us feedback