The Eighth Wonder Of The World

One of the eight World Heritage Sites of Sri Lanka, Sigiriya is renowned for its 5th century pre-Christian frescoes. It has also been declared by UNESCO as the 8th Wonder of the World.

Situated in Matale district, in the middle of Sri Lanka’s famous cultural Triangle, Sigiriya (Lion’s rock, in Sinhalese සීගිරිය) is an ancient rock fortress and palace ruin surrounded by the remains of an extensive network of gardens and reservoirs. The fortress’ name is echoed in the staircases that emerge from a lion’s mouth constructed in brick and plaster which offer access to the site. Sigiriya is also renowned for its 5th century pre-christian frescoes, which are reminiscent of the paintings of the Ajanta Caves in India. One of the eight World Heritage Sites of Sri Lanka, it has also been declared by UNESCO as the 8th Wonder of the World.

Sigiriya stood as spectator to the civilization of Ceylon at the time of the reign of King Kashyapa I (AD 477-495) who, according to the chronicles of Mahavamsa, a historical poem written in the Pali language about the kings of Sri Lanka, was responsible for its construction. Although the rock itself had been inhabited since the third century, the fame of the Lion Mountain is due to the story of Kashyapa, who established his capital here. The king, son of Dhatusena, secured his power by both orchestrating the assassination of his own father, and expelling his brother. Following the king’s death, Sigiriya was used as a Buddhist monastery until the 14th century. 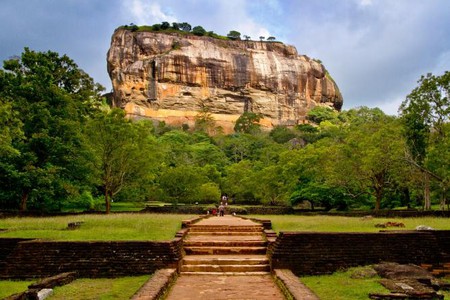 The site’s majestic frescoes inspired an aesthetic language that would continue to be practiced for hundreds of years. Poems inscribed on the side of the rock by 6th century admirers visiting Sigiriya are some of the oldest examples of the written Sinhalese language. These texts, as well as the marvelous frescoes, demonstrate the sizable influence that this abandoned civilization had on subsequent literature and art.

The Cultural Triangle Project, launched by the Government of Sri Lanka, focused its attention on Sigiriya in 1982. Archaeological work began on the entire city for the first time under this project. There was a sculpted lion’s head above the legs and paws flanking the entrance, but the head broke down many years ago.

The whole face of the hill appears to have been a gigantic picture gallery.The paintings would have covered most of the western face of the rock, There are references in the graffiti to 500 ladies in these paintings. However, many more are lost forever, having been wiped out when the Palace once more became a monastery, so that the paintings would not disturb meditation.

To visit this stunning site, Olanka Travels can arrange a breathtaking tour.