The Diyaluma Falls in Sri Lanka

Diyaluma Falls is formed from the Pungala Oya, a Sri Lankan river that runs 427 meters (1401 feet) above sea level

At the peak of Diyaluma Falls in Sri Lanka, you will find a serene natural infinity pool overlooking a 772-foot (220-metre) waterfall. Located near the town of Koslanda in the Badulla District, the waterfall is the second-largest in Sri Lanka, making it a must-see attraction for explorers visiting the heart of the Indian Ocean.

After making the long trek up the cliff to Diyaluma Falls, travellers are greeted by a series of pools and a staggering view over the sweeping valleys and forests of Demondara. 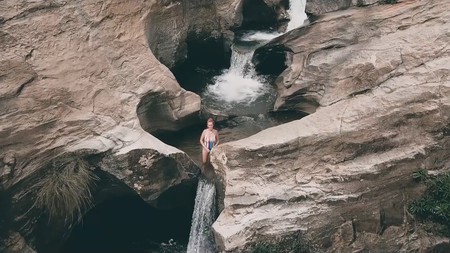 Diyaluma Falls is formed from the Pungala Oya, a Sri Lankan river that runs 427m (1,401ft) above sea level. Up the river, a whole host of spectacular smaller falls can be found, but Diyaluma is the one you don’t want to miss.

And for those afraid of heights, there are a series of pools at the bottom of the waterfall to float in and admire the overlooking gigantic cliff face from.

The horsetail waterfall is the setting for a tragedy in a local fable in which a chief was wrongly exiled from his clan into the highlands. The man wanted to rejoin his tribe but all the entrances to the region were guarded, so he used a rope to climb down the cliff.

As he climbed down, the man slipped on one of the rocks and fell to his death. Filled with empathy for the man, the gods created a torrent of water to flow over the cliff and cover any evidence of the death.

The creation from the gods is where the name comes from, with a “rapid flow of water” translating directly in Sinhalese to Diyaluma.

The Ella area in which the waterfall can be found is a region of natural beauty with plenty to do and see. The Ella gap is considered one of the most spectacular views in Sri Lanka, gazing over the southern plains of the country.

An incredible architectural landmark nearby is the mammoth Nice Arch Bridge. Its nickname is the Bridge in the Sky because of – you guessed it – how high up the bridge is. On a misty day, it cuts through the clouds.

Ravana’s Cave nearby is not only an amazing natural landmark but a legendary historical site. The story goes that King Ravana of Sri Lanka kidnapped the Indian king’s beautiful queen and confined her to these caves.

There is also the famous Kandy to Ella train journey, which takes you past lush green hills and tea plantations. It is regarded as the most beautiful train journey in the world, although it does last around seven hours, so bring snacks.

Ella itself is a bustling, vibrant place that provides the perfect stop-off spot for a drink. The town is popular with backpackers and is great for a night out.

And if the climb up to Diyaluma Falls is not enough, there is the huge trek up to Little Adam’s Peak. The walk takes two to three hours, climbing up 1,141m (3,743ft). Although it is a long walk, there is a path to follow the entire way and the spectacular views at the top are entirely worth the climb.

The best way to get here

Embrace the culture and take a stunning journey from Ella to the falls by tuk-tuk. The journey only costs around 4,000 rupees (£16.82) and is definitely worth it for the whole experience.

Once in the area, there are two places to start the climb to Diyaluma Falls.

One option is hiking from the bottom near the village of Koslanda. This is considered quite difficult as it takes around an hour of steep, off-road climbing. But if you’re up for the challenge, there are lovely cool pools waiting for you at the top.

The other option is much easier, and that is to walk up from Poonagala village. From here it is around 30 minutes’ walk along a path.