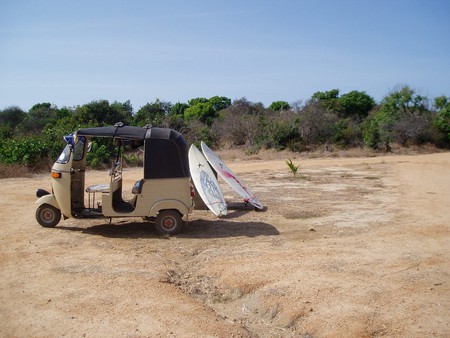 Sri Lanka is a famous surfing destination that caters to all experience levels. There are waves for learning how to stand on a surf board and there are tubes over shallow waters with sea urchins that make the wave even more exciting – surfers know what that means!

The country has different seasonal patterns on each side of the island; when one coast is choppy, the other is calm. The rains take turns hitting the coast from different directions, making Sri Lanka a year round surf option. The main surfing season for the south is from November to May – that’s when the waves are utter perfection. The best season on the east coast is from April to October, when the waves are longer. Here’s what you need to know: there will always be waves somewhere.

The main patches for surfing are the southwest, south and east coasts. The most famous areas are Unawatuna and Hikkaduwa in the southwest, Weligama in the south and Arugam Bay in the east. All areas have popular (i.e. crowded) as well as more hidden spots. The waves in Sri Lanka are not the giant kind like those in Hawaii or Western Australia, they are smaller and longer; one wave in Okanda (on the east coast) can be surfed for as long as 60 seconds if your legs can handle it. For the best day-to-day intel on where the good waves are, contact the team at Surf South Sri Lanka.

On the southwest coast of the island, about 120 km south of Colombo (or just 20 km from Galle), is the famous party town of Hikkaduwa. Once just a surfing village, now it’s popular with surfers and party goers alike – there is always something happening in Hikka! These are the best surf spots in Hikkaduwa:

Bennys – A left hander reef break preferred by experienced surfers when the waves are over 6 ft.

Main Reef – Left and right handers over a deeper reef, good and relatively safe for all levels.

North Jetty – Long left handers with a reef break by the harbor wall. 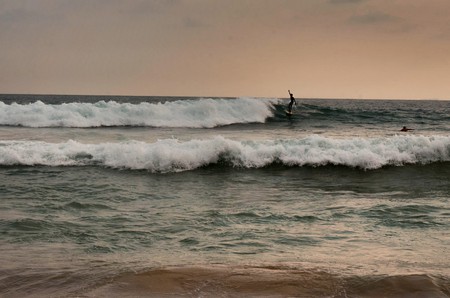 Another popular surfing area is Unawatuna Bay, and in this case it’s more like a family surfing vacation destination. Then night life is not as prominent as that in Hikkaduwa but the waves are a great nonetheless.The swell on the beach is not always good, but the locals know where the good swells are, so just ask! These are the best surf spots around Unawatuna:

Unawatuna Beach Break – Unawatuna has great beginner waves right on the beach but the man-made reef that protects the temple messes with the natural order of the waves.

Dalawella Reef – About 120 meters from the main beach, Dalawella is a left breaker over a reef with coral, rocks and urchins.

Bonavista Bay – A good learner’s wave between 3 ft and 5 ft with the right swell. On the north part of the temple peninsula.

Kabalana Beach Break – Kabalana is great for beginners right at the shore with frothy small waves but the main point has a rip current and there are no lifeguards.

South Beach – Just a bit north of Kabalana is South Beach with a good longboard wave. Tends to get blown out in the afternoons though. 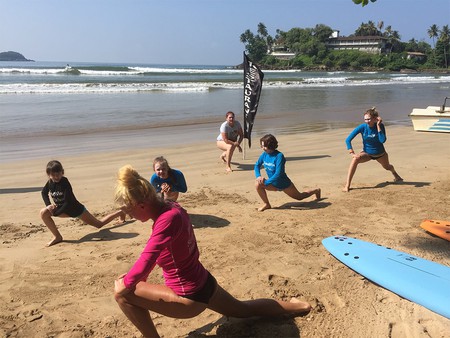 Unawatuna is a great spot for surf lessons for all ages. | © Surf South Sri Lanka

Weligama has good waves all year round and is another favorite for beginners and intermediate surfers. There is the main beach break on the main beach and there are little beaches along the bay, each with their own waves.

Weligama Beach Break – The two kilometer main beach has a row of surfing schools with plenty of boards for rent. The unfortunate side is that sometimes it suffers from residential pollution. The waves are usually easy to learn on and can get a bit bigger for the intermediate level surfers.

Midigama (Lazy Left, Right and Rams Right) – Just a little north of Weligama is Midigama with three great points. The Lazy Left is better in the afternoons and a favorite with goofy riders. The Right is close to the road and has a shallow reef break. Rams Right is for more advanced surfers, with some barrels and short and tight breaks.

Gurubebila (Coconut Point and Plantation Point) – Plantation Point is great for early morning rides with both lefts and rights. It’s a rocky entry but is easier to ride than Coconut which is a classic A-Frame formation better suited for experienced surfers.

Mirissa Bay – Just a bit south from Weligama is Mirissa Bay with its crescent shaped beach lined with palm trees and rocky reefs on the sides. There are both left and right handers in this bay and it’s mostly for intermediate and advanced surfers (or more skilled beginners wanting to get better with reef breaks). 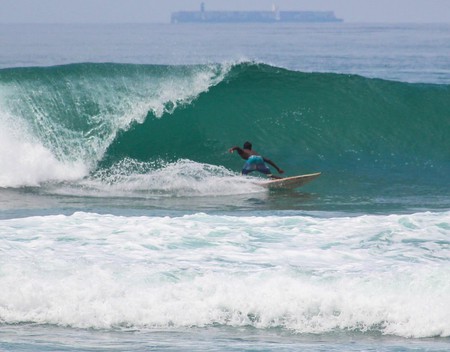 Arugam Bay is on the east coast and the best season to be here is when it’s too rainy in the south. The weather gods grace Arugam Bay with dry skies while the rest of the island is battered by monsoon rains. It’s best to visit Arugam Bay between April and September. These are the best spots:

Elephant Rock – This spot is a tuk tuk ride from Arugam Bay. It’s best for beginners but getting here is a challenge. Don’t wear flip flops as you have to climb rocks to get to the beach. It’s worth it though, because the beach is beautiful.

Baby Point and Main Point – These are the two main points in Arugam Bay itself. Baby Point is better for beginners while Main Point is for more advanced riders.

Pottuvil and Whisky Point – These two are north of Arugam Bay and are both for experienced surfers. Whisky Point tends to get crowded!