The Best Places to See Wildlife in Sri Lanka 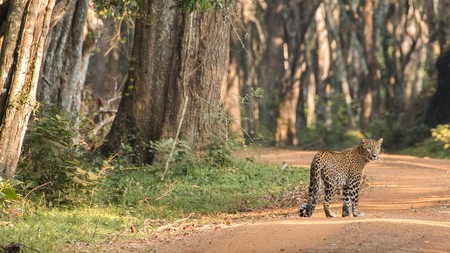 Leopards in Yala. Elephants in Udawalawe and Minneriya. Blue whales off the Mirissa coast. Sri Lanka is one of the top wildlife-watching destinations on the planet. Though you’re likely to spot creatures throughout the country, the best wildlife experiences are, more often than not, found in the national parks. To help you maximise your wildlife-watching adventures in Sri Lanka, here are the best places to see animals, plus a choice selection of places to stay (all bookable with Culture Trip).

A protected area since 1938, Yala National Park is one of the largest reserves in Sri Lanka. It features several habitats, from open parkland and dense jungle to flooded lagoons and coastal dunes, all home to a great variety of flora and fauna. Leopards are the main attraction here – it’s said that Yala hosts the highest concentration of leopards in the world, amounting to one cat to every square kilometre. You’re sure to spot many more animals, too, including deer, wild boars, crocodiles, langur and toque monkeys, golden jackals and sloth bears. The freshwater, marine, scrub and woodland areas also make it an ideal home for birds, with more than 200 species flying freely in the park. 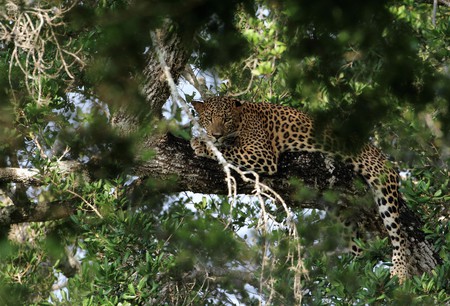 The Unesco-listed Sinharaja Forest Reserve is the largest tropical rainforest in Sri Lanka. Birdwatching is particularly popular here, with the reserve home to 80 percent of the bird species in Sri Lanka, among which are endemic birds such as the green-billed coucal, Sri Lankan blue magpie and red-faced malkoha. Butterflies, insects, reptiles and rare amphibians also live here, plus mammals including the leopard, purple-faced langur, rusty-spotted cat and three types of squirrel. They couldn’t have chosen a more lush place to live – the park is filled with towering trees up to 45m (148ft) high, amid waterfalls and bubbling pools. 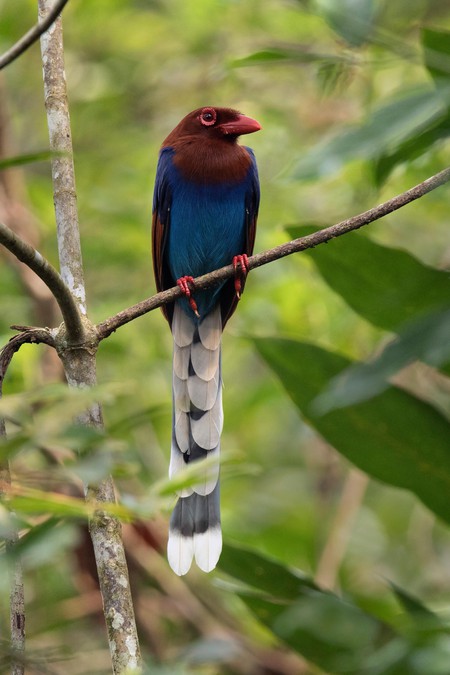 Elephant lovers will adore Udawalawe National Park. This large reserve is home to more than 400 Asian elephants, which roam its 308sqkm (119sqmi) of grassland, scrub jungle and riverine forest. You’re likely to spot them at the Udawalawe Reservoir, where they often gather to drink water – usually congregating in numbers of up to 100. But they are not the only residents here. Mugger crocodiles, sambar, spotted and barking deer, wild boars, water buffaloes and jackals all live on site, along with nearly 200 bird species. If you visit between November and March, you will get a chance to see raptors including the changeable hawk-eagle or the serpent eagle. 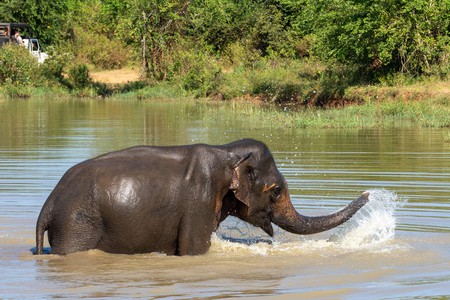 This park in the central highlands sits at 2,100m (6,890ft) above sea level; it is the highest plateau in the country, giving it the nickname the Roof of the Island. Large areas here are covered in cloud forest and montane grasslands, creating a hospitable environment for endemic plants and animals. Moving in large herds, the sambar deer is the most common mammal found here. Squirrels, wild boars, rusty-spotted cats, purple-faced langurs and the endangered slender loris – only found in India and Sri Lanka – are among the 24 mammal species you’ll see in the plains. Keep an eye out for rare lizards, including the rhino-horned lizard, and various migratory and endemic birds.

Minneriya National Park in the North Central Province is one of the smallest parks on the island, covering an area of just over 777sqkm (300sqmi). Still, the wildlife here is nothing short of spectacular. You will find deer, purple-faced langur and macaque monkeys, sloth bears and about 20 leopards hanging out in the grasslands, dry tropical forest and wetlands. Migratory and indigenous birds, such as the hanging parrot or the green bee-eater, can also be seen flying around. The real stars of Minneriya, though, are once more the Asian elephants. Expect to see them at “the gathering”, a true spectacle where more than 300 elephants congregate at the Minneriya reservoir in search of water and fresh grass during the dry season (from July to October) – this is the largest meeting of Asian elephants in the world. 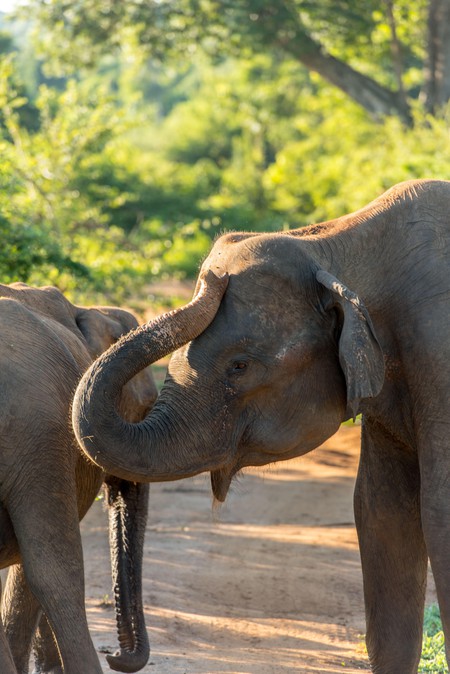 If you’re looking for peace and quiet by tranquil waters, the largest national park in Sri Lanka does not disappoint. Wilpattu, which translates as natural lakes in Sinhalese, is known for its wetlands, made of 50 shimmering lakes surrounded by grassy plains. Given the size of the park and its relatively low number of visitors, Wilpattu will give you a real sense of wilderness; at the same time, it’s somewhat harder to spot the wildlife here. If you’re lucky, you’ll see leopards wandering, crocodiles bathing in lakes and peafowl showing off their brightly coloured plumage. You might even glimpse tortoises and cute flycatchers. 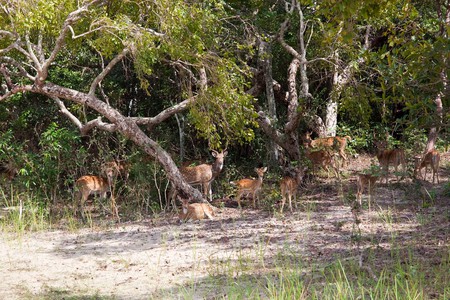 For even more diverse wildlife, visit Bundala National Park which stretches along more than 20km (12mi) on the south coast. The park encloses five shallow lagoons and it’s known for its wide range of terrain including scrub jungle, salt pans, dunes and wetlands. Among the animals you’ll see here are five turtle species and almost 200 species of migratory and aquatic birds. The most popular temporary residents have to be the greater flamingos that migrate here from northern India, but you can also spot pelicans, painted storks and beautiful peafowl. Apart from the birdlife, Bundala hosts a number of grey langur monkeys, crocodiles, elephants and wild pigs. 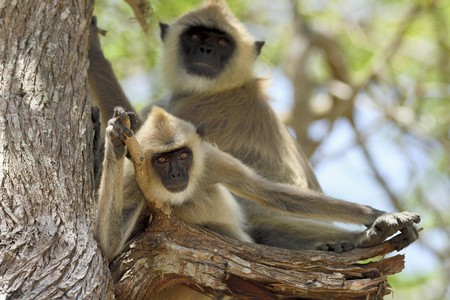 It’s one thing to see Asian elephants gathering for water and quite another to witness them swimming across the Senanayake Samudraya lake. That’s the surreal view you might take in at Gal Oya National Park, one of the most untouched national parks in Sri Lanka. This majestic lake, which is framed by more than 250sqkm (96sqmi) of evergreen forest and open savannah, constitutes the largest inland body of water in Sri Lanka and is dotted with islets. Explore the reserve by boat, jeep or on foot; either way, nature here is at its most abundant, and includes more than 150 bird species. In the middle of the lake is Bird Island, brimming with exotic bird colonies. Gal Oya is also home to deer, leopards, sloth bears and mugger crocodiles. 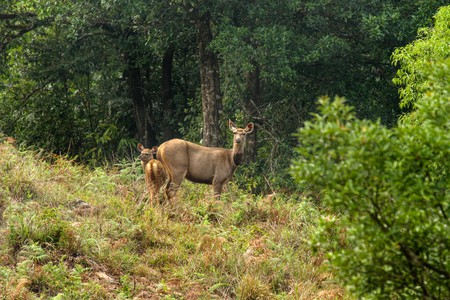 The coast of Mirissa

There is no better place to spot whales than from the small beach town of Mirissa, on the south coast of Sri Lanka. May to October is whale-watching season so hop on a cruise boat and see these rare creatures as they rise to the surface. You are most likely to encounter the blue whale, but sperm, fin and killer whales (orcas) can also be seen here. Chances are you’ll also meet dolphins, including bottlenose, common and spinners, plus a few sea turtles that frequent the shore. 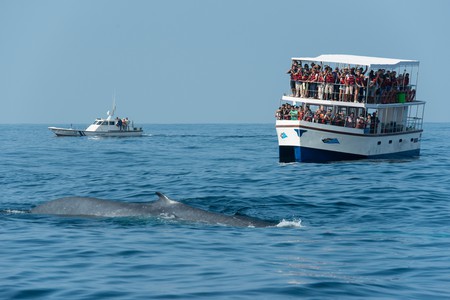 Hop on a whale-watching tour from Mirissa to see the biggest animal on the planet, the blue whale | © Ariadne Van Zandbergen / Alamy Stock Photo

We’ve picked our favourite places to stay in Sri Lanka – some near the wildlife parks and others a bit further – to help you make the most of the fascinating nature and impressive wildlife in this country. Pick one and book your stay with Culture Trip. 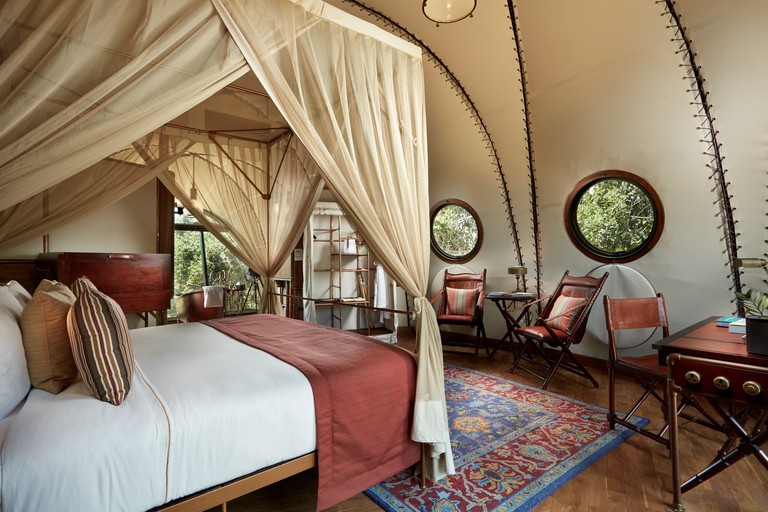 Courtesy of Wild Coast Tented Lodge / Expedia
For easy access to Yala National Park, book this plush lodging, which maintains a safari feel while offering a luxurious stay. The tents here – more suited to glamping than camping – are shaped as big bubbles, nestled within the greenery. Some come with handmade copper bathtubs, others with bars and TV rooms, and others look out to shimmering pools. Just outside, elephants and leopards roam freely. 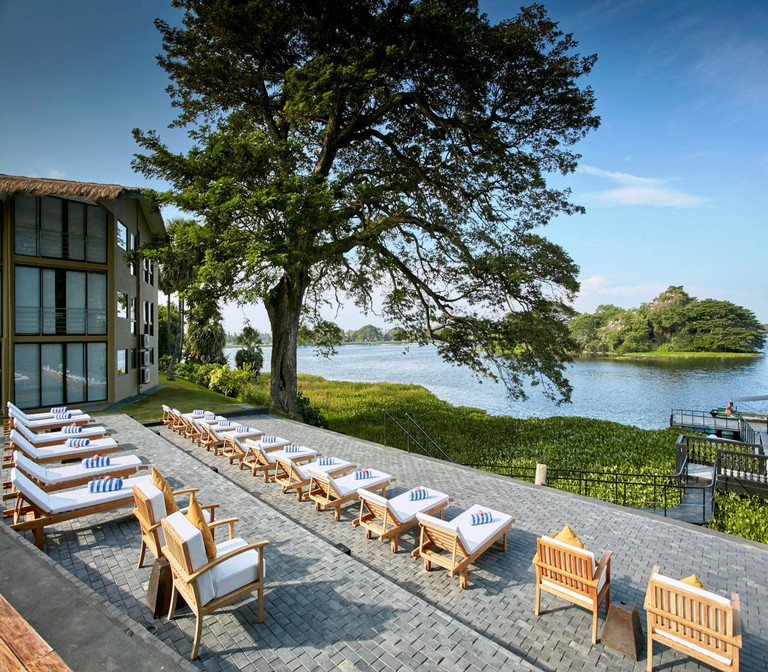 Courtesy of EKHO Safari Tissa / Expedia
Animal lovers will appreciate a stay at EKHO Safari Tissa, which sits between Yala and Bundala national parks. Tissa Lake is moments away, which makes for relaxing times by the water, either lying on a sunbed or enjoying a lakeside dinner at the chic restaurant on the terrace. Alternatively, unwind in your terracotta-coloured suite that overlooks the deluxe pool. Many more restaurants with amazing seafood are nearby. 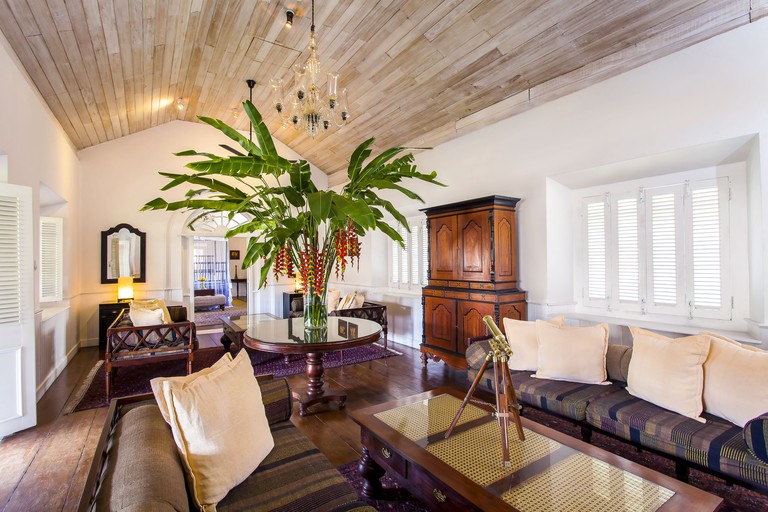 Courtesy of Galle Fort Hotel / Expedia
Under an hour’s drive from Mirissa, in the heart of the 17th-century Galle Fort, the Galle Fort Hotel has been transformed from a 300-year-old merchant’s mansion into a refined boutique wonder. The period furnishings and 18th-century woodwork have kept the former glory of the property alive, while honouring the cultural heritage of the region. Yet there’s also a touch of modern luxury, in the sumptuous outdoor pool and the landscaped courtyard that surrounds it. 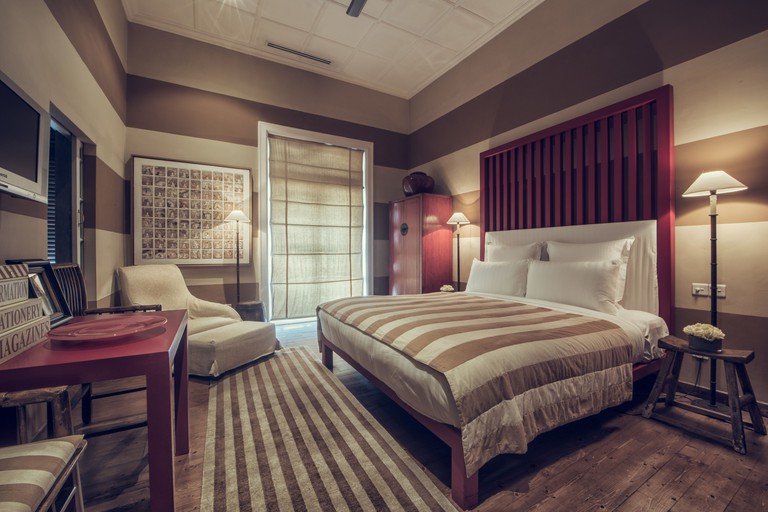 Courtesy of Paradise Road Tintagel Colombo / Expedia
This regal boutique hotel dating to 1930 has previously served as the residence of three Sri Lankan political leaders. Found in the most elite neighbourhood in Colombo, the property will instantly give you presidential vibes, thanks to its cream furnishings, marble bathroom details and the vast, manicured gardens. Some of the rooms have private terraces with plunge pools, while there’s also an indoor lap pool, a fitness room, a sleek restaurant, a baroque-inspired bar and a library. 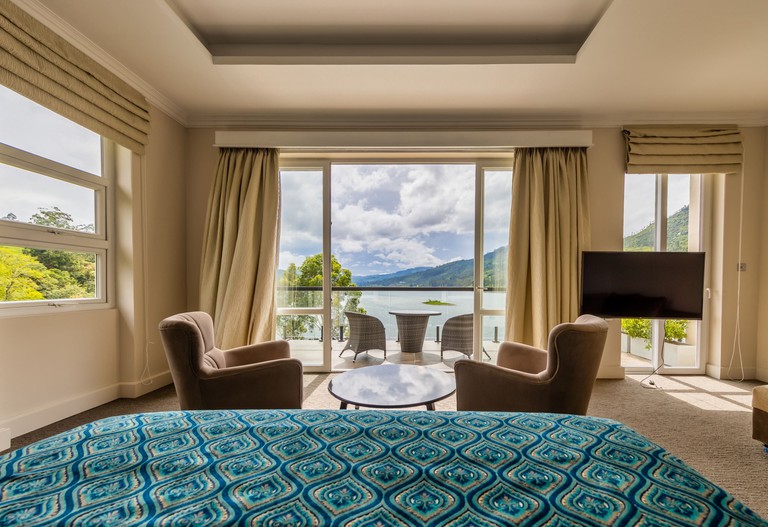 Courtesy of Villa Serenity / Expedia
There couldn’t be a more fitting name for this tranquil villa that sits in the town of Hatton. The soothing colours of the rooms and the minimalist interiors create a sense of calm and relaxation, which is only enhanced by the idyllic waterfront vistas – each room comes with a patio and a lake view. Pamper yourself with a visit to the full-service spa or spend time at the golf course. You may also opt for a round of billiards or darts, or enjoy hiking and cycling in the beautiful wilderness surrounding the property.
Give us feedback