In a country that has been colonized by the Dutch and the British, ravaged by civil war and devastated by natural disaster, one man has had the single greatest impact on independent Sri Lanka’s landscape: Geoffrey Bawa, Sri Lanka’s most prolific and important architect. 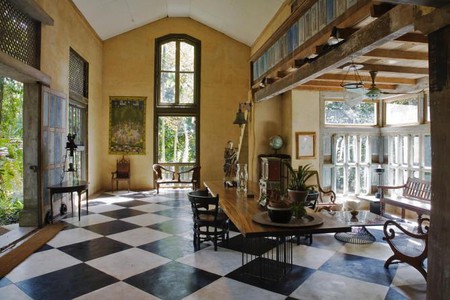 Geoffrey Bawa (1919 – 2003) was born of Sri Lanka’s multi-ethnic, colonial heritage, with Arab and British paternal lineage, and Dutch Burgher and Sinhalese maternal lineage. Like his grandfather, Amaduwa Bawa, and his father, Benjamin Bawa, Geoffrey traveled to Britain for a prestigious university education, and, following the family tradition, qualified as lawyer in 1944. He returned to Colombo to work briefly in a law firm, but soon tired of the profession and, having lost both his parents at a tragically young age, used his inheritance to travel across the Far East, the United States and Europe. Although almost seduced by the prospect of settling down in an Italian lakeside villa, he instead returned to Ceylon and threw himself into a new initiative – turning his recently purchased Lunuganga Estate into a tropical paradise that would evoke the Mediterranean attitude with which he felt such affinity.

This personal project, combined with Bawa’s perpetual feeling of being torn between his Asian and European cultural identity, ultimately gave rise to Sri Lanka’s unique style of modern architecture, of which Bawa was the pioneer. His experience at Lunuganga propelled him into the world of imaginative and inventive design, but also revealed his lack of technical training. After a short architectural apprenticeship in Colombo, Bawa traveled again to London, where he qualified as an architect in 1957, aged 38. 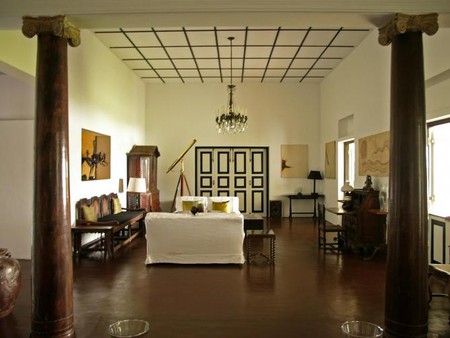 For the next 32 years, Bawa worked under the auspices of Colombo firm Edwards Reid and Begg, hardly leaving any area of the country untouched by his distinctively spirited mark. At first, his commissions were predominantly urban houses, offices and public buildings in Colombo, including ‘deconstructed colonial bungalows’ – a radical departure from the inappropriately stuffy British architecture. The ‘tropical modernist’ style would become a fundamental part of the evolving identity of a newly independent Sri Lanka. Bawa was instrumental in presenting innovative ways to use light, space and materials to create dynamic designs that worked with, not against, challenging environments.

By 1960, Bawa, who had always been a member of an elite class in Sri Lanka, was moving in a social circle of artists, and his work was highly sought-after by influential cultural figures, from hoteliers and European plantation owners, to the Catholic Church and charitable foundations. The celebrated batik artist, Ena de Silva, a close friend of Bawa, brought him on board her project to create an airy and modern suburban house in Colombo that still retained the atmosphere of the traditional homes she grew up in. Here Bawa produced an early example of his experimentations with open space, creating a free flow of movement inside the building by carefully emphasizing the voids between mazes of whitewashed structures. 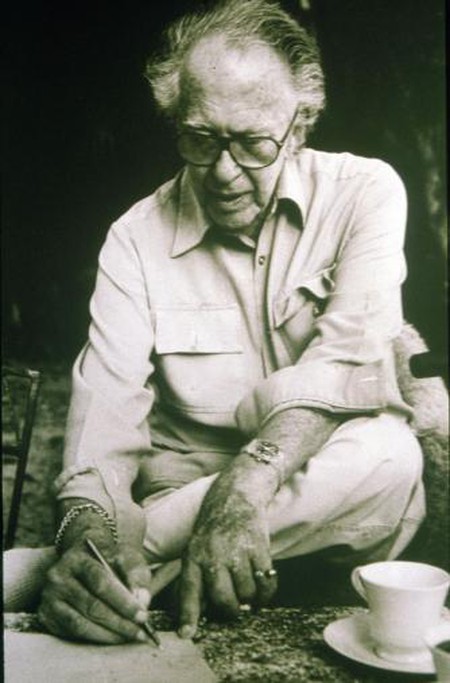 A year later, Bawa, now in frequent collaboration with Danish architect Ulrik Plesner, built a new office for himself on Alfred House Road in Colombo, which has now been transformed into the elegantly rustic The Gallery Café, owned by Shanth Fernando of the Paradise Road group of properties. Inside, Bawa’s influence, if not his artifacts, can still be appreciated. Past the exhibited art hangings on the entrance corridor, visitors emerge into an unexpectedly expansive and bright space, where lounging areas and striking sculptures frame a tranquil open courtyard, which, by Bawa’s masterful trickery, somehow captures the essence of an Italian summer, all year round.

In the early 1970s, Sri Lanka was already coming into its own as a tourist destination, and Bawa was the obvious, if not the only, choice to design the first purpose-built holiday resort, the Bentota Beach Hotel, and neighboring Serendib Hotel. Bentota Beach was sophisticated in its subtlety, with hidden hints of ancient palaces, medieval forts, and colonial manors, whilst the Serendib provided a modest resthouse, and appeared to naturally coexist with the local environment. Bawa’s impact on the burgeoning luxury travel scene was unprecedented, and has since been unrivaled: he designed 35 hotels between 1965 and 1997, of which 13 were built in Sri Lanka. Only five, all from his later period – The Triton, The Neptune, The Kandalama, The Lighthouse and Blue Water – survive in their original architectural form.

Nonetheless, Bawa’s talent was increasingly celebrated and requested overseas. Instructions came in 1971 from India, where he built the Madurai Club extension (now demolished) to the prestigious Connemara Hotel, and in 1973 from Bali, where he worked on an ultimately unrealized project to develop private villas for Australian painter Donald Friend. Over a decade later, experiencing global recognition following features in a book collection and an exhibition at the Royal Institute of British Architects in London, Bawa focused his energies for a number of years entirely outside of Sri Lanka, dedicating himself to ambitious projects such as a tropical glasshouse in Singapore’s Botanical Gardens, an extension to the Hyatt Hotel in Bali, a huge villa hotel on the island of Bintan and a high-rise development in Penang, in addition to private homes. Though these designs were left unfinished, they induced a new period of creativity in Bawa, who was already in his seventies. 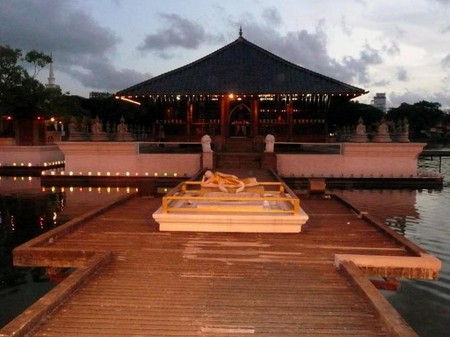 Bawa’s imprint can best be felt in Colombo city, which has become the archetypal ‘tropical metropolis’. Though the unstable political environment nearly compelled Bawa to permanently relocate to India, his most enduring landmarks are the political and ideological symbols in the capital. In 1977, the year that Sri Lanka elected a new government headed by J.R. Jayawardene, Bawa built the Seema Malaka Buddhist Temple on Beira Lake – a remarkable feat of tantalizing architecture that emits the illusion of floating on the otherwise unbroken surface of the water. Two years later, a year into his executive presidency under the amended constitution, J. R. Jayawardene commissioned designs for a new Parliament building at Kotte. As with the temple, Bawa proposed that the magnificent complex be built on high land that would become an island in the centre of a flooded valley. The result came to fruition in 1982, and was declared open by J. R. Jayewardene.

Nowadays, the view of Bawa’s Parliament building is a somewhat simple summation of the country’s essence: the serene lakes represent the natural beauty, sustainably manipulated by man’s hand, and rising high above is a structural example of the strive for innovation and brilliance. Visitors to Sri Lanka have unlimited opportunities to engage with Bawa’s greatness: his prolific output continued until the late 1990s from his small independent practice Geoffrey Bawa Associates. In March 1998, aged 79, Bawa suffered a stroke, and the firm was managed by Channa Daswatt until its closure in 2002.

The Lunuganga Estate and Bawa’s Colombo home, ‘Number 11’, are open for public and private tours. At Number 11, Bawa combined four individual bungalows on 33rd Lane, Bagatelle Road, in the quiet and pretty suburb of Colombo 3, into a personal oasis of innovation and comfort. The entrance is marked by a decorated glass door and semi-circle moonstone. True to Bawa’s style and philosophy, the unassuming exterior hides a plethora of treasures and surprises inside the house. A walk through his home is itself an aesthetic journey, and an insight into the ideas and style of a rare architectural genius. Bawa’s home is a perfect wonder of space, light and art, maintained in all its vibrancy by the Geoffrey Bawa Trust. 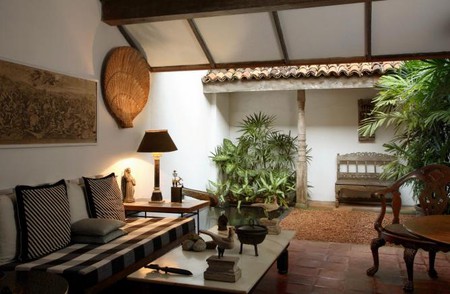 Sri Lanka’s tiny island is scattered with remnants of Geoffrey Bawa, yet his legacy is not a personal one, but rather one that captures the character of a whole nation. In a tribute, the Burgher author Michael Ondaatje said of Bawa:

“Every artist works on a different scale. A page. A painting. A sonata. A film. A novel. A house. A garden. But essentially they all create, in some ways, self-portraits of themselves. Art is a long intimacy. The scale of the achievement might be grand and take years but it has to be personal and carefully pieced together and specific to its culture.”

In this sense, there is no better portrait of Sri Lanka’s heritage, its culture and its potential, than the inimitable work of Geoffrey Bawa.