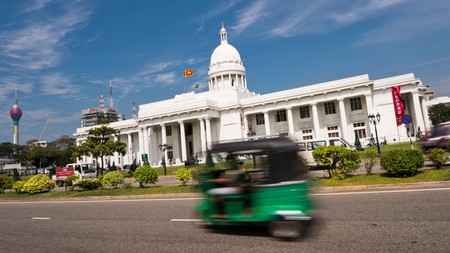 Colonial architecture alongside modern hotels, busy street markets juxtaposed with traditional afternoon tea – the Sri Lankan capital is all about contradictions. A gateway to the country’s ancient temples and unspoilt jungle, Colombo is steeped in history and culture, with plenty of shopping opps, making it a destination in its own right and the perfect spot for a solo stay.

However you make the most of your “me” time, you’re in for a treat in Colombo, with an itinerary of shopping sprees in boutiques and indie stores, bouncing around classy bars and street-food stalls, and time on the beach. A melting pot of cultural influences – from Buddhist and Hindu to western – and generally safe streets make Colombo a great destination for solo travellers of any gender. 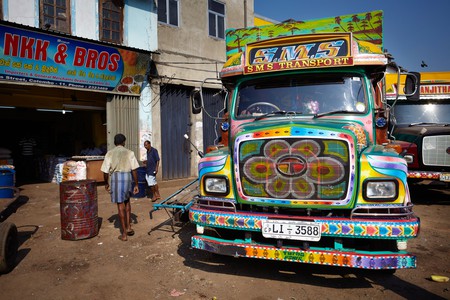 The diversity of Colombo spills out into a variety of neighbourhoods both near to and away from the seaside. You’ll need more than two days to explore the Gangaramaya temple, eat your way down the Galle Face Green and wander Pettah’s unique mosque, museum and market. The dry season here runs from December to March, granting the best weather conditions here on the west coast. You won’t be put off when visiting in other months, but you won’t catch nearly as many rays on popular Mount Lavinia Beach. 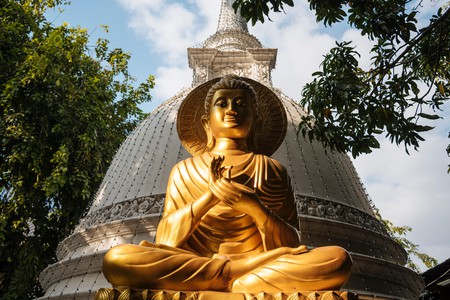 Where to stay in Colombo as a solo traveller

Divided into numbered neighbourhoods, Colombo is home to 15 unique areas that each have a special flavour. From the up-and-coming Colombo 2 to the ever-growing Colombo 5, there’s an amazing street eat, a revered temple or quirky shop near your hotel. Spice things up with a stay in one of these colourful Colombo neighbourhoods.

The affluent Cinnamon Gardens is only 3km (2mi) from the city centre but feels like a world away, and it’s the place to stay if you want to spoil yourself with lavish digs. Check into a hotel and you’ll have the Prime Minister’s Office as your neighbour. Upmarket cafes and galleries will allow you to enjoy your visit in style. With its own rooftop bar and infinity pool, we recommend a stay at Jetwing Colombo Seven.

Home to some of the oldest buildings in the city as well as the busy harbour, Fort is the CBD of Colombo. Popular tourist spots like the Dutch Hospital and Old Colombo Lighthouse call this neighbourhood home. Spend the night in Fort if you want to stick close to your itinerary without being in the city centre. There are budget options in C1 Colombo Fort and CityRest Fort, as well as a luxury experience available at the Grand Oriental Hotel. 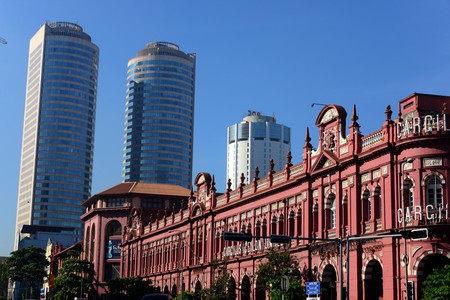 Kollupitiya is the multicultural heart of Colombo. Home to the Gangaramaya Temple, the National Museum, Galle Face Green and an old colonial brewery, this central neighbourhood puts you within walking distance of the city’s best sights. Push the boat out with a stay at the Taj Samudra or the Galle Face Hotel, right on the shoreline.

Colombo 4, Bambalapitiya, is a shopper’s paradise by the sea. Scour the malls for deals, then take the cash you’ve saved out for a night on the town. Casinos, pubs and restaurants galore dot this bustling neighbourhood.

What to do in Colombo as a solo traveller

The longer you stay in Colombo, the more you realise just how much there is to see and do here. After visiting the hallmark sights like the National Museum and Gangaramaya Temple, dig deeper into the country’s history and culture with these engaging and enlightening activities that are perfect for solo travellers.

Located close to the Gangaramaya Temple, Beira Lake is a tranquil place to kick back and rest your feet. The beautiful Buddha statues lining the shore will inspire you to discover the stunning Seema Malakaya temple in the centre. Take a boat ride to get closer to the shrine, spotting wildlife like monitor lizards and storks as you paddle through the water. 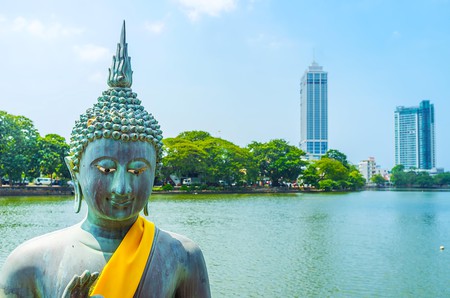 Shop for a batik

Batik is a technique used to dye cloth that originated in Indonesia – and it’s a souvenir you can’t leave Colombo without. Head to one of the best places to get batik from, such as Buddhi Batiks in Koswadiya, where you’ll be supporting a family-owned business full of talented artisans. Buddha Batiks has batik products ranging from bags and saris to bikinis and dresses, so it’s an excellent place to pick up gifts. 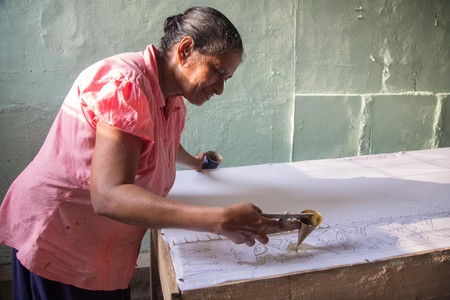 Drink up a dodgy bar walk

Unlike other cities, the no-frills bars of Colombo are institutions, with their own hole-in-the-wall histories. Downing arrack, a spirit made from the fermented sap of a coconut flower, while getting to know the local history of Colombo, is a wonderful way to liven up a night in the city. 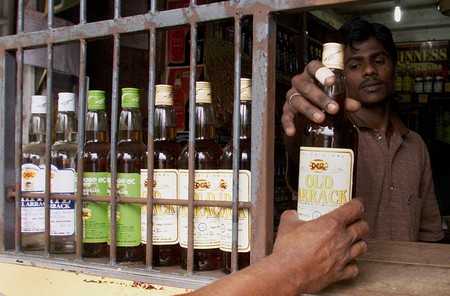 You can join a dodgy bar walk during your first night in Colombo on Culture Trip’s 12-day small-group tour of Sri Lanka.

Eating and drinking in Colombo

You’ll find Indian, Dutch, English and Portuguese influences here, so you won’t be surprised to find the capital has an eclectic food scene, and foodies of all budget levels will have a gut-busting good time here.

When dining out in Colombo, you’ll rarely find a menu without rice and curry. The flatbread roti will surely accompany every dish from the pancake-like appam to lamprais, banana leaves full of rice, curry and meatballs. If you’re avoiding meat – whether permanently or just for your trip – fear not. There’s a great selection of vegetarian restaurants to pick from.

Drinking in Colombo is about simple pleasures. A refreshing gulp of coconut water served in the shell always hits the spot. Also, make time for a cuppa – Sri Lanka is the world’s fourth largest tea producer, so you’ll get a decent brew here. For a stronger sip, a drink mixed with the arrack or a local Lion beer is what you should request at the bar. 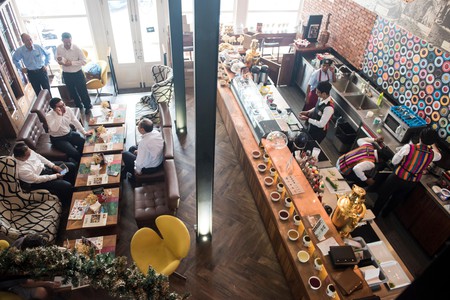 For an elegant cafe with plenty of tea options in Colombo, head to t-Lounge by Dilmah | © Ariadne Van Zandbergen / Alamy Stock Photo

The Indian Ocean is alluring and you can enjoy time on the beach in Colombo at Galle Face or Wellawatte. However, do keep in mind that undertows can make swimming and surfing dangerous, so be mindful of conditions and only enjoy the water when there’s a lifeguard present.

Getting around Colombo as a solo traveller

The Sri Lankan capital isn’t difficult to navigate, though it may be time-consuming depending on your mode of transportation. Metered taxis are easy to hail, and your hotel should have no trouble arranging a ride if requested. Tuk-tuks and buses will also take you around, though traffic throughout the city could cause delays. If you don’t mind light walking, it’s convenient to take a tuk-tuk to, say, Galle Face Green, and you’ll then have no issues walking to sights such as Gangaramaya Temple, Independence Square and the National Museum. 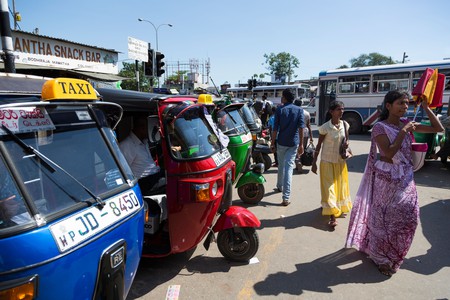 You won’t need to be on guard in Colombo any more than you would in the average capital city. However, it’s wise to keep in mind that scammers and pickpockets may take advantage of tourists. Regarding customs, you’ll likely be given cutlery in restaurants, but eating with your right hand is customary around Asia.