The Most Beautiful Unesco World Heritage Sites in Sri Lanka 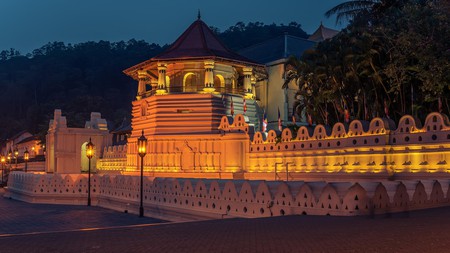 The Temple of the Tooth allegedly houses a tooth of the Buddha. Its cultural significance helped earn the city of Kandy World Heritage Site status in 1988 | © Rolandas Misius / Alamy Stock Photo

A Unesco World Heritage Site is an important landmark chosen by the United Nations Educational, Scientific and Cultural Organization as a protected area. The places selected are usually in a historical location with cultural and anthropological importance. Sri Lanka is home to eight such sites – six cultural and two natural. Keep reading to find out what they are, and plan your trip to visit them all.

Let us do the work for you to experience Sri Lanka’s history and more – book our exclusive 12-day trip across the country discovering breathtaking ancient temples and playful wildlife from Culture Trip.

Buddhist Temple, Ruins, Architectural Landmark
Facebook
Email
Twitter
Pinterest
Copy link
Share
Kandy, a mountain city in Sri Lanka, was home to Sinhalese kings from 1592 to 1815. It’s also the site of Sri Dalada Maligawa, also called the Temple of the Tooth; here, a special container holds a tooth of the Buddha. Over the years, the relic came to be very important politically, with some believing that the holder of the sacred tooth was the one who would have power over the Buddhist population. Kandy was appointed the status of World Heritage Site in 1988, mainly due to the Temple of the Tooth. 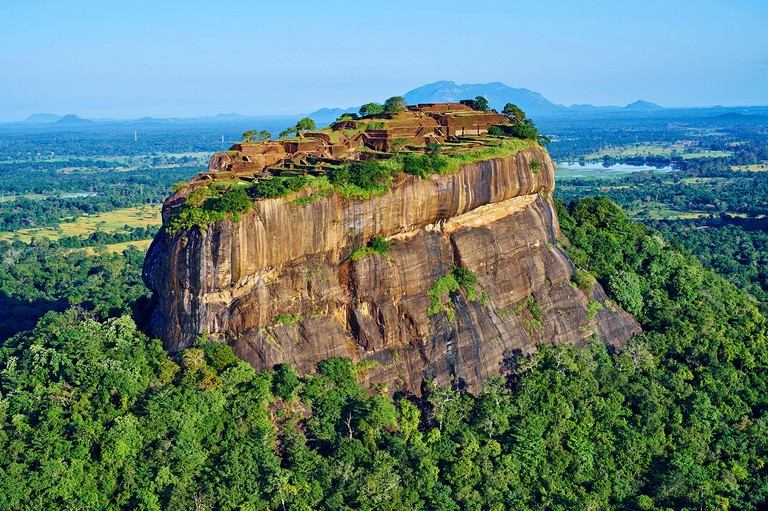 Sigiriya gives you gorgeous panoramic vistas of Sri Lankan jungle | © Tuul and Bruno Morandi / Alamy Stock Photo
The rocky outcrop of Sigiriya holds the ancient remains of King Kassapa’s palace from the 5th century AD. The top is reachable by stairs built on the side of the mountain, and features the Lion Rock, as well as the remains of the palace and fortress. Ascend to the top for a remarkable 360-degree view of the jungle below. Sigiriya was named a Unesco World Heritage Site in 1982.

Ruins, Buddhist Temple, Architectural Landmark
Facebook
Email
Twitter
Pinterest
Copy link
Share
The city of Anuradhapura was the first ancient capital of Sri Lanka, and it is still a sacred Buddhist religious centre. It lies around 200km (124mi) north of Colombo, the current capital. Buddhist worshippers and pilgrims visit the well-preserved ruins of the temples along the bank of the river Malwathu Oya year-round. The city is also home to a hugely sacred Bodhi tree, believed to be a descendant of the Bodhi tree under which the Buddha was illuminated. Anuradhapura became a Unesco World Heritage Site in 1982.

Old Town of Galle and its fortifications 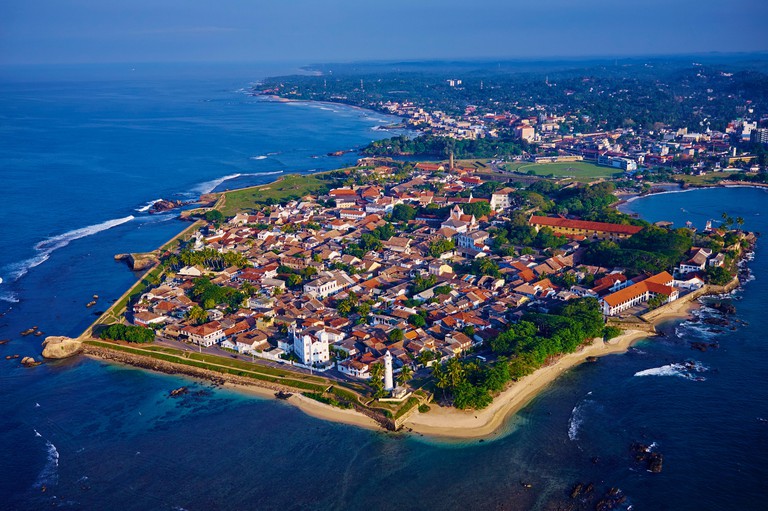 © Tuul and Bruno Morandi / Alamy Stock Photo
The Dutch built the fortified town of Galle in the 16th century. It sits approximately 130km (81mi) south of Colombo. Thick stone ramparts, which were built to protect the goods stored there during the times of the Dutch East India Company in the 17th and 18th centuries, surround the historical buildings and churches. The entire fort has been a Unesco World Heritage Site since 1988. 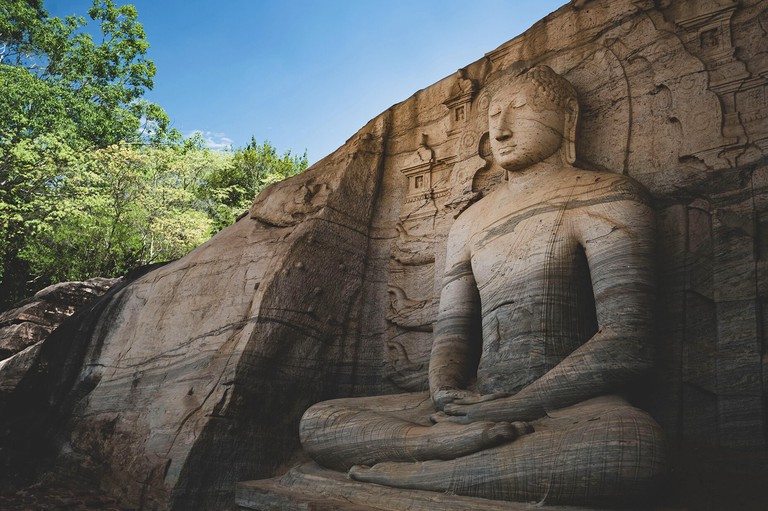 © Suranga Weeratuna / Alamy Stock Photo
Polonnaruwa is part of the Cultural Triangle of Sri Lanka, along with Anuradhapura and Sigiriya. After the destruction of Anuradhapura in the 1st century, it became the capital of Sri Lanka. The remains include Bhramanic constructions from the Cholas civilisation, as well as the garden city that was built in the 12th century. This site was named a Unesco World Heritage Site in 1982.

Buddhist Temple, Ruins, Architectural Landmark
Facebook
Email
Twitter
Pinterest
Copy link
Share
The Golden Dambulla Cave Temple has been a pilgrimage destination for the past 22 centuries. It’s also the largest and best-preserved cave temple on the island. The Dambulla Cave Temple was named a Unesco World Heritage Site in 1991 in order to preserve the magnificent wall paintings and more than 150 statues in and around the temple. 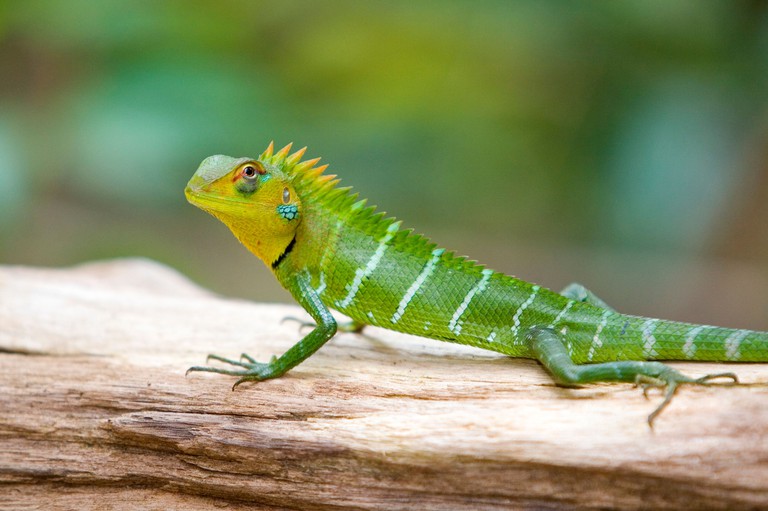 © Mark Daffey / Alamy Stock Photo
Designated in 1988, the Sinharaja Forest is one of the two natural Unesco World Heritage Sites in Sri Lanka. The last remaining primary rainforest in Sri Lanka, the reserve is full of endemic trees and species; many rare amphibians make the reserve their home. 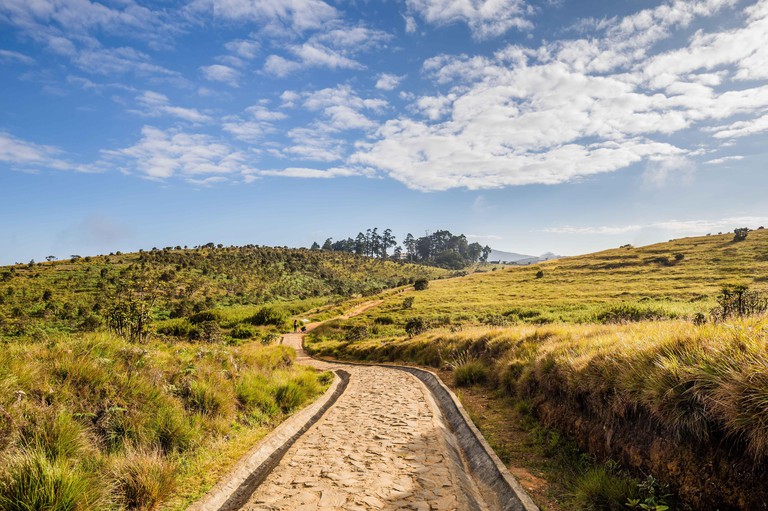 The Central Highlands of Sri Lanka include Horton Plains National Park, the Knuckles Conservation Forest and the Peak Wilderness Protected Area. At more than 2,000m (6,562ft) above sea level, this natural World Heritage Site joined the others in 2010. There are plenty of hiking trails in the Central Highlands, and it’s a biodiverse haven.