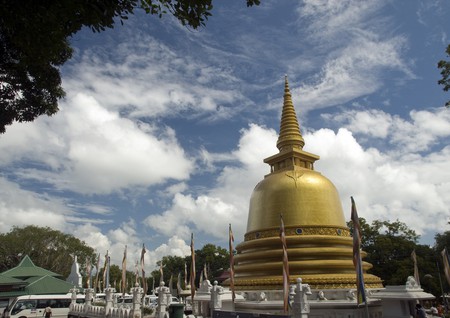 In the north-central area of Sri Lanka, dry plains and rocky outcrops are home to the famous Cultural Triangle. This region, the home of ancient Sinhalese royalty is loaded with ancient ruins and restored temples, a must visit when in Sri Lanka. The way in which The Cultural Triangle is experienced will be very different in terms of how much time is spent there. Following are 11 things to know about Sri Lanka’s Cultural Triangle.

The Cultural Triangle is so called because it includes three major sites that form a triangle. Anuradhapura to the north, Polonaruwa to the east and Kandy to the south-west. Inside the triangle, there are other places of interest; Mihintale, Ritigala and Dambulla.

The northern part of the triangle is called Rajarata in Sinhalese, meaning King’s Land. This area was where the old Sinhalese kings lived, some constructions date back as far as 2000 years. The southern section of the triangle is Kandy where the Kandyan empire ruled between the 14th and 19th centuries. The two kingdoms are not directly related but were both Buddhist and their beliefs and religious structures permeate through history. 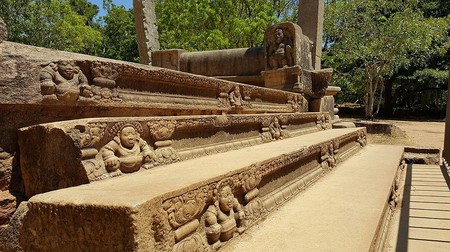 The ancient cities of Anuradhapura and Polonnaruwa were once capitals of the ancient Sinhalese kingdom. The first and most important was Anuradhapura, which was built in 380 BC and was abandoned due to Indian invasions in the 10th century AD. The jungle took over the building for many years until it was cleared in the 1800’s. Polonnaruwa is the second ancient capital of Sri Lanka but is much small than its predecessor. The structural remains at Polonnaruwa are in a better state as well. Both ancient Buddhist capitals are a marvel to behold and are quite different from each other. Both of these ancient capitals are UNESCO World Heritage Sites.

Dagobas, or stupas are large dome constructions built to house ancient relics of Buddha. There are three major dagobas in Anurhadapura, one of which is almost 3000 years old and only second in size to the pyramids of Giza. Walking next to the largest of the dagobas makes you feel small and part of the fabric of the universe. These are quite spectacular constructions that ironically just sit there as a means of contemplation. 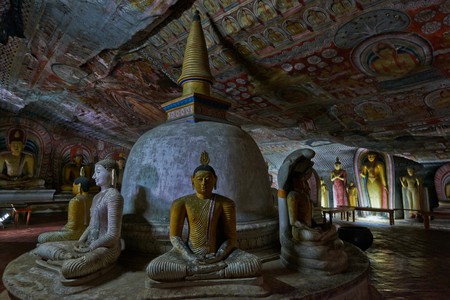 As it is custom in the Buddhist religion, temples and buildings are decorated with sculptures of Buddhas in different meditative poses, apsaras, elephants and remarkable moonstones at the entrances. There are plenty of sculptures to marvel at in the Cultural Triangle, from elephants carved into walls surrounding dagobas or the giant standing Buddha at Polonnaruwa.

One of the main attractions in the Cultural Triangle is the sacred Bodhi Tree in Anuradhapura. Sri Maha Bodhi is believed to have grown from a branch of the Bodhi tree under which Buddha found enlightenment. This is the most sacred tree in all of Sri Lanka and has been so for thousands of years. Many rituals and offerings are given to the tree in veneration.

Buddhist Temple, Ruins, Architectural Landmark
Facebook
Email
Twitter
Pinterest
Copy link
Share
Map View
Apart from the ancient temples at Anuradhapura and Polonnaruwa, The Cultural Triangle is home to thefamouse Dambulla Cave Temple and some other smaller cave temples. The Dambulla Cave Temple houses a giant resting buddha statue surrounded by smaller standing statues and wall paintings depicting the life of Gautama Buddha. The complex is made up of five temples and a giant golden Buddha.

In Sri Lanka, tanks are rainwater reservoirs either used for water collection or as bathing pools. There is a large reservoir near Polonnaruwa and several smaller ones throught out the central plains. In Sigiriya, there are plenty of tanks of all sizes, some covered in lotus flowers. 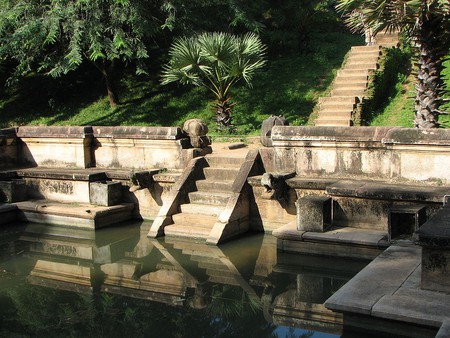 Strewn in between the dry grass and trees of the dry plains are the majestic rocky outcrops of Sigiriya and Pidurangala. Sigiriya was a palace fortress for one of the ancient Sinhalese kings. The remains are pretty spectacular to visit even though the crowds can be maddening when climing the steps to the top. Pidurangala, another rocky outcrop close by, has the same omnipresent view of the plain plus the added bonus of seeing Sigiriya from a vantage point.

It is common for the Buddhist people of Sri Lanka to go on pilgrimage in the Cultural Triangle. Either from temple to temple inside the city of Anuradhapura or from point point in the triangle, visiting all religious sites. Foreign visitors can also undertake this pilgrimage to some extent, but they will need to dress accordingly and preferably be accompanied by a local to properly partake in the ritualistic customs.

The Temple of the Tooth