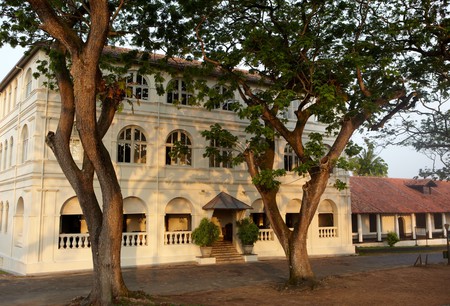 One of the reasons that Sri Lanka has always been a favorite among film makers is that the country is one of those places that has “everything” needed to make a film. The jungles are thick, the mountains are beautiful and the beaches are idyllic. Here’s a round-up of some iconic films and music videos that used Sri Lanka as their stage.

The Bridge on the River Kwai

The Bridge on the River Kwai is the story of the Northern Thai railway that connected Thailand to Malaya, and how it was built by British prisoners of war. Adapted from the book by the same name, The Bridge on the River Kwai was filmed in the ’50s in the Sri Lankan highlands. A makeshift bridge was built over the Kelani River; the scene in which it explodes is one of the most famous in cinematic history. The real bridge over the Kwai is in Thailand, and is a popular tourist spot. There is nothing left of the filming location now, but film buffs sometimes make the trip there.

Indiana Jones and the Temple of Doom

The Temple of Doom was supposed to be filmed in India, but local officials were offended by the story and refused to let the producers shoot there. Instead, the crew went to Sri Lanka, where they filmed the shrine in the jungle and the hanging rope bridge scenes. Both were filmed in the Kandy highlands. The rope bridge isn’t there anymore, but movie buffs can hike all the way to the edge of the cliff and photograph the big rock wall that is a huge part of the bridge scene. The rest of the movie was shot in a sound stage!

Elephant Walk is an adaption of a novel by Robert Standish. Starring Elizabeth Taylor, David Finch and Dana Andrews, this film depicts colonial Ceylon. The story revolves around a white woman who comes to live in a tea plantation owned by her new British husband. Elephants roam wild in the plantation and wreak havoc, destroying it all in a violent rage. Movie buffs can visit the house where Vivian Leigh (who was originally cast in the film) stayed during the pre-filming period. The Brief Gardens is a beautiful garden complex in the middle of paddy fields and tea plantations.

The Second Jungle Book movie was filmed in 1997 on location at the Udawattakele forest and sanctuary in Kandy. Ironically, there are no Bengal tigers in Kandy. Unfortunately, this movie didn’t do so well.

A Common Man (2013) is an American/Sri Lankan production that was shot on location in Colombo. Ben Kingsley and Ben Cross act as a terrorist and police chief, respectively, in this police drama/thriller. It won the Best Picture, Best Director and Best Actor awards at the Madrid International Film Festival.

Tarzan the Ape Man was filmed in the Sri Lanka jungle. Bo Derek acts as Jane, and also produced the film. There were a lot of problems during filming, and the original Hollywood crew of 23 ended up being only eight by the end. Tarzan does not speak throughout the film!

Back in the ’80s, when the first music videos were being made, Duran Duran came to Sri Lanka to film videos for “Save a Prayer”, “Hungry like the Wolf” and “Lonely in your Nightmare”. They were shot in the Pagoda Tea Room in Colombo, The Amangalla Hotel in Galle and the architectural remains in the Cultural Triangle. At this time, music videos started telling stories, and had a more artistic feel to them. Here are all three for your enjoyment!

Lonely in your Nightmare