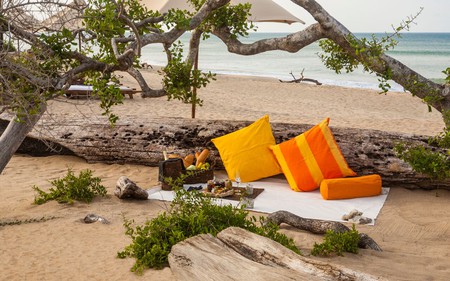 Picnics by the ocean at Jungle Beach by Uga Escapes. | © Courtesy of Uga Escapes

Golden sun-kissed shores, heavenly mist-clad mountains and shimmery star-lit night skies are not the only reasons Sri Lanka is a highly popular honeymoon destination for couples from around the world. This tropical paradise has some of the most magical locations in tranquil seclusion, that will have you falling in love all over again. Here’s ten of our favourite dreamy picks that are perfect for couples.

This ocean beach resort off the coast of Trincomalee offers a unique fusion of natural coastal beauty and contemporary interiors amidst a lush jungle, and is the ideal escape for any couple. Bedecked with luxurious amenities, every room overlooks the vast expanse of the Indian Ocean, the lagoon or the jungle. Jungle Beach also offers the finest spas in the region to rejuvenate and refresh from within. Awash with the sweet sounds of lapping waves and soothing bird song, there’s no better place to rekindle romance than in this tropical jungle paradise. 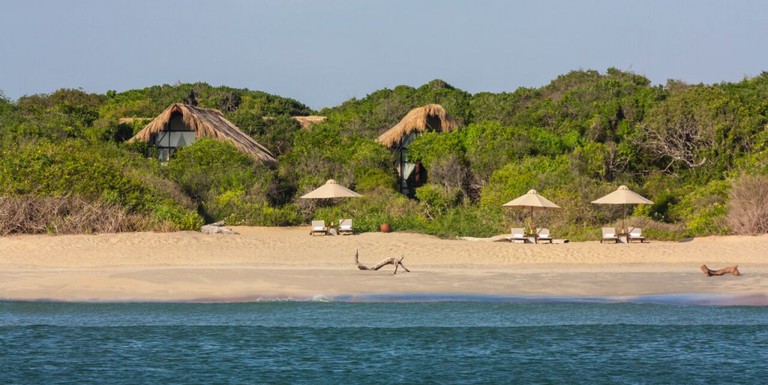 Jungle and the beach | ©Courtesy of Uga Escapes 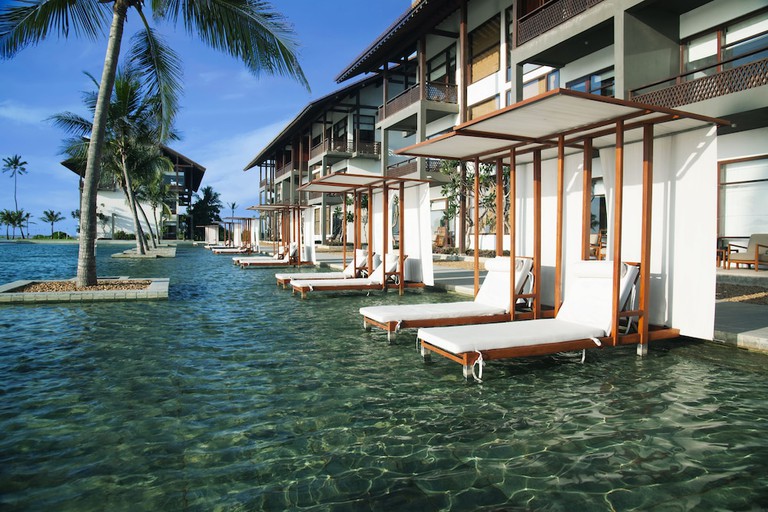 View More
Unavailable for the next 3 months
Wake up on the sea shore to a beautiful sunrise, at the Anantaya Resort and Spa. Anantaya literally translating as ‘infinite’, promises an infinite paradise within their seductively secluded property, in the charming coastal town of Chilaw. Surrounded by the lagoon at one end and the ocean at the other, this is an ideal location for a destination beach wedding and a perfect romantic beach-side sanctuary for the incurable romantic.
More info 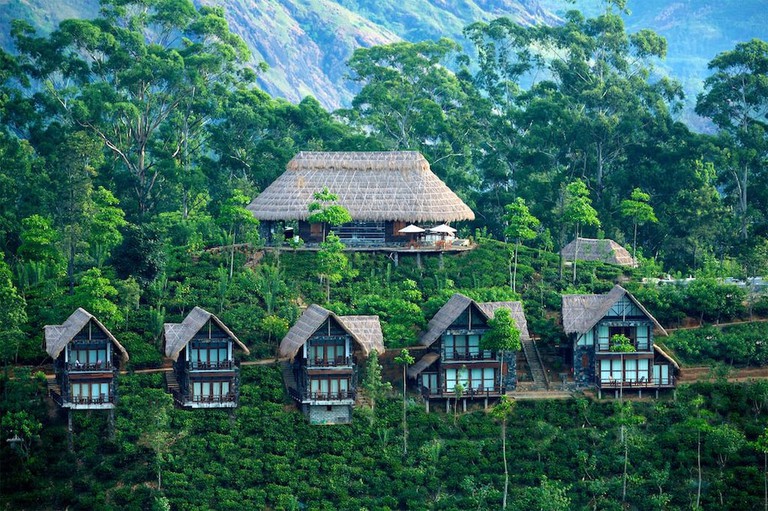 View More
Unavailable for the next 3 months

Amidst the cool highlands of Ella, with stunning tea estates running miles on either side, the 98 Acres Resort is among the top luxurious resorts in the region. Teeming with beautiful bird life just outside the balcony, enjoy a warm cup of world famous Ceylon tea with a dream-like view of paths, peaks and valleys disappearing into the floating mist. Ella is the ideal place for couples to cuddle up in the cold and observe nature’s most beautifully painted scenery without even leaving the comfort of their luxurious rooms.
/ 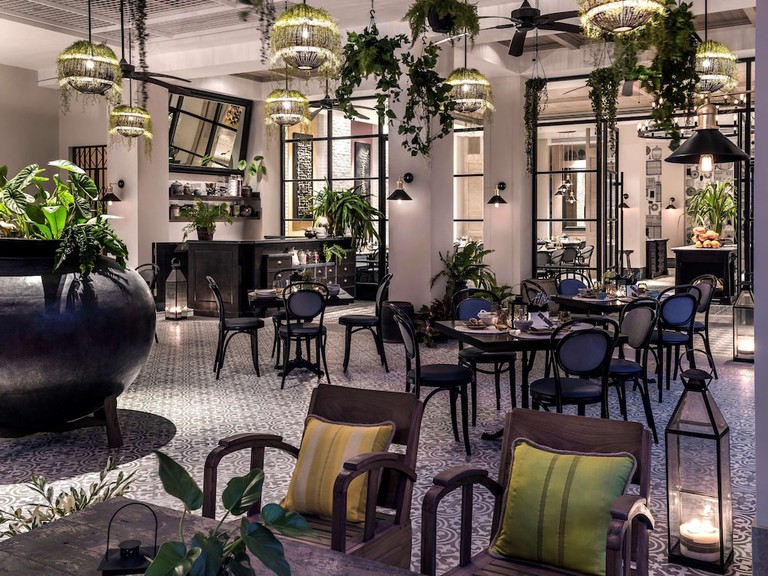 View More
Price Drop
Now from $150 per night
On the shores along the ancient spice route, in a village doused in tales of old, the Shangri-La’s Hambantota Resort and Spa offers blissful tranquility and intimate isolation to lovers from all over the world. The resort has an individual charm, balancing a lush golf course in the shades of the palms, an expansive spa and an artisan village by the sea. The magic works every time on visitors old and new. It truly is a romantic haven.
More info

Paradise is just a boat ride away at the Centara Ceysands Resort & Spa situated between the river and the ocean. Begin your journey sailing into the calm blue, where this dreamy resort has nothing but love, hospitality, great food and luxury to offer. The keenly decorated hotel interiors complemented with delightful amenities puts the resort on top among its region. Romance and passion abound, inspired by the sensual interiors of this resort. 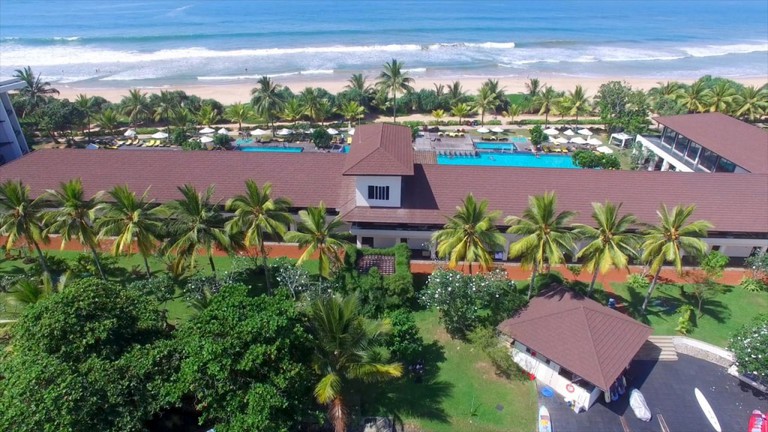 A village by the lake, a getaway into the wild and delectable food for the soul, this place has ‘honeymoon destination’ written all over it. In the secluded suburbs north of the island lies this rustic village that can transport you back in time, while maintaining its luxury feel. In close proximity to the Sigirya Rock Fortress, visitors find sanctuary at the Habarana Village by Cinnamon for a luxurious and intimate getaway in the wild, surrounded by exotic fauna. 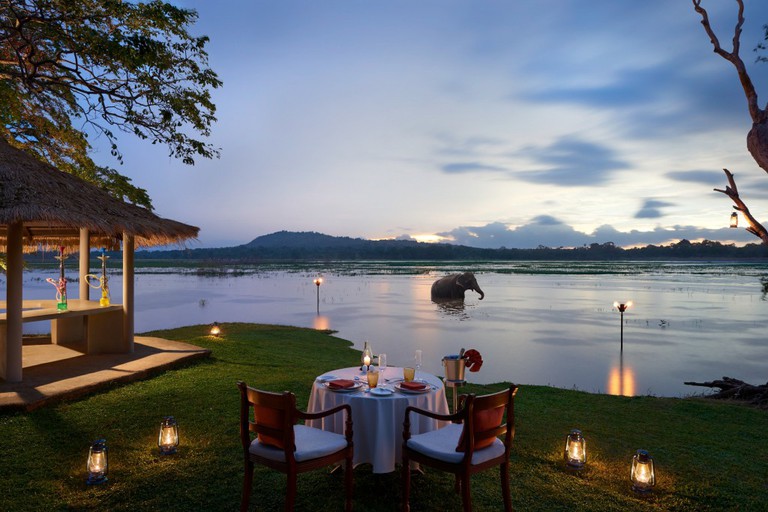 A idyllic intimate private dinner setting in the wild by the lake at Habarana Village by Cinnamon. |© Courtesy of Cinnamon Hotels 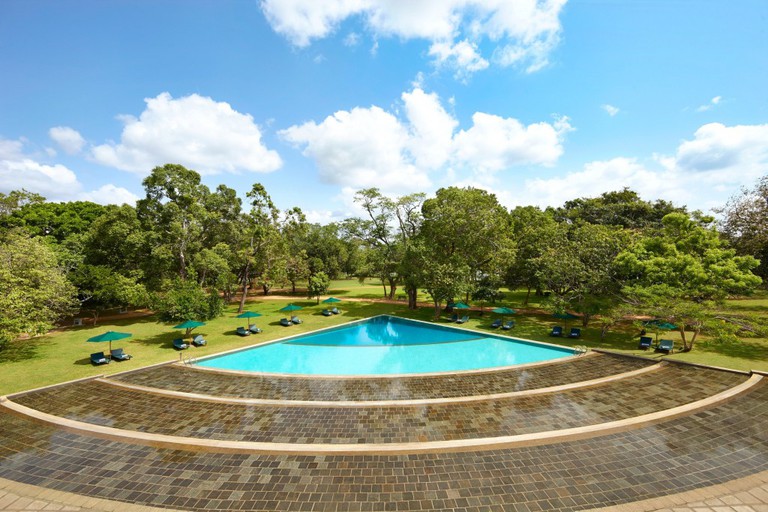 The unique Village Pool at the Habarana Village surrounded by nature’s most epic landscapes. | © Courtesy of Cinnamon Hotels

When the mist in the revered highlands part, a breathtaking sight of an English courtyard that transports you to the 1950s, stops you in your tracks. Welcome to Ceylon Tea Trails, the world’s first tea bungalow resort. Awaken your soul at this ideal getaway from modern life; bask in the history etched into the walls and the spellbinding hillside surroundings. This location with five lavishly appointed bungalows is bound to have you falling in love all over again, if not with your partner, then the place itself! 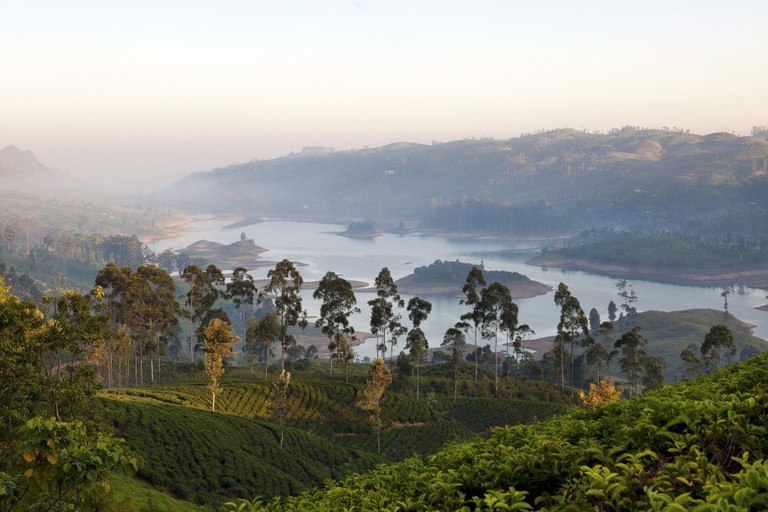 The view outside one of the five bungalows, the century old Castlereagh Bungalow overlooking the lake. |© Ceylon Tea Trails – Flickr

Here’s what’s on offer in the heart of the ancient capital of Sri Lanka – a 150 year old mansion with 20 deluxe and private villas that will surely add allure to your romantic getaway. Recognized as one of the finest boutique hotels in Sri Lanka, Ulagalle by Uga Escapes is a utopia in the midst of greenery. The surroundings are teeming with endemic wildlife and getting around by bicycle is a trip down memory lane, that adds charm to this Sri Lankan village experience. 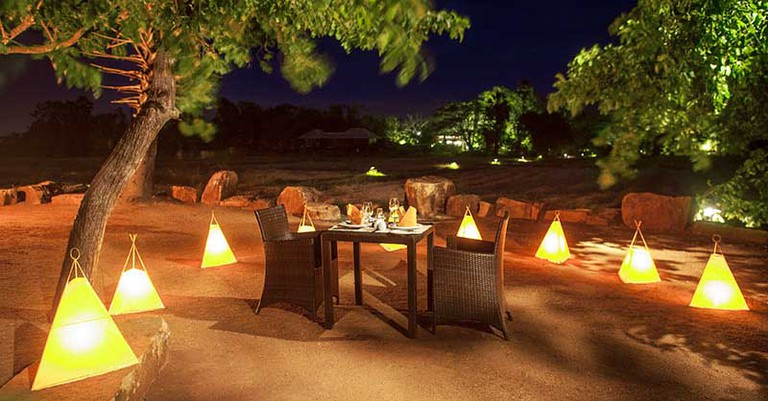 Sitting on top of the Kandalama rock, this stunning edifice stands at the heart of the cultural triangle in Sri Lanka with nature’s most picturesque, panoramic illustrations surrounding it. Offering a fusion of contemporary and traditional, this resort is an idyllic escape for budding love. The rooms are exceptionally well-appointed and overlook the most fantastic vistas including the eighth wonder of the world – the Lion Rock (Sigiriya). Waking up to the fine melodies of bird song and monkey mischief, Heritage Kandalama is a tropical paradise. 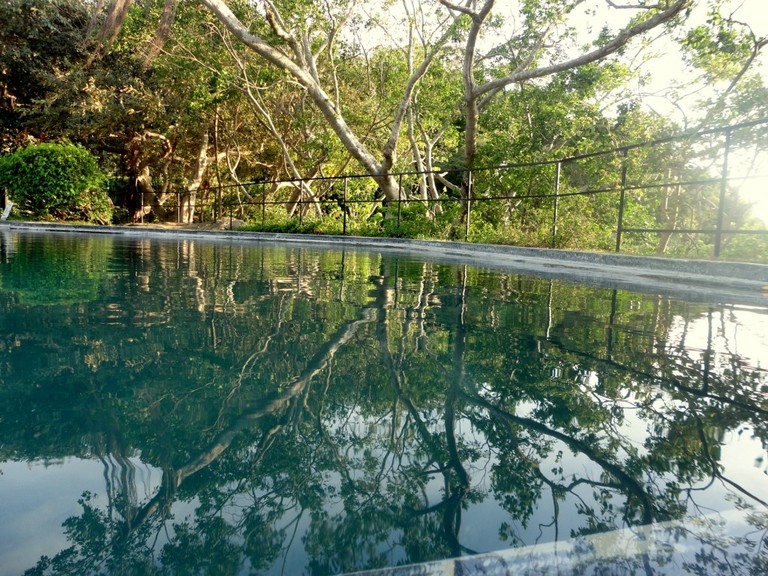 The natural pool at Heritance Kandalama with an amazing view. |© Avindi Perera 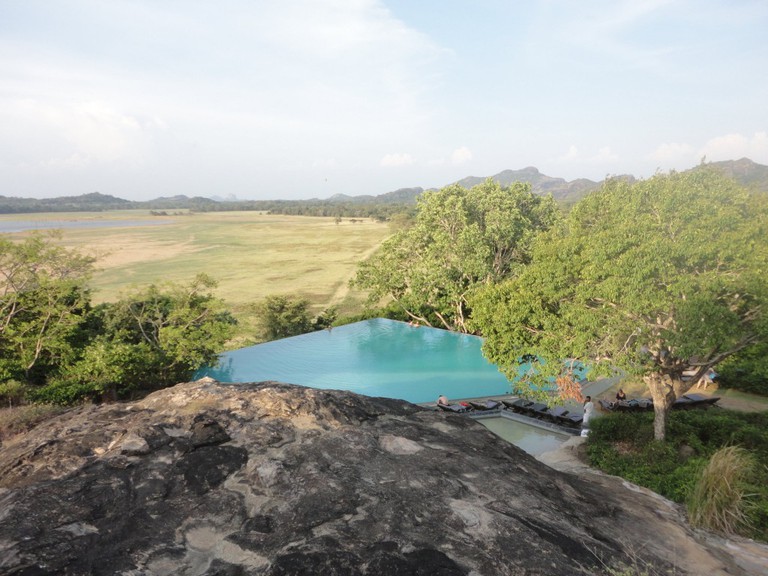 Enjoy the rhythmic sounds of lapping waves and breathe a fresh gust of invigorating sea breeze, right outside your room, at Sri Lanka’s first of its kind deluxe boutique resort. Saman Villas is one of the most exotic resorts in Bentota, perched on a rocky outcrop jutting out into the Indian Ocean. Its architecturally stunning terrace and open plan fine dining area that look out into the soothing cerulean waters, make every meal an elegant affair. Inspired by archaic temple architecture, it is the picture- perfect location for your big day and the model honeymoon destination with its exquisite surroundings and pampering hospitality to indulge in with your loved one. 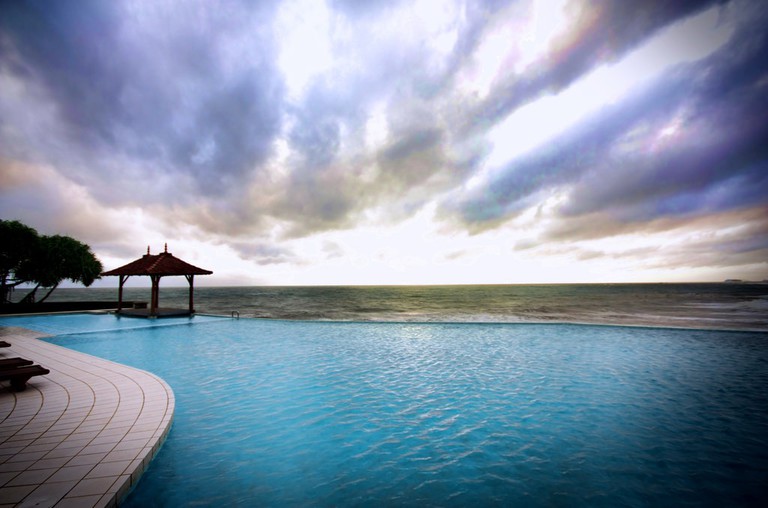