When Is the Best Time of Year to Visit South Korea? 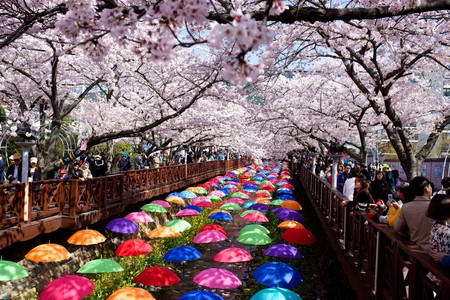 South Korea’s four seasons each have something special to offer visitors of the country, but depending on what you want out of your Korean experience, some times are better to travel than others. Read on to find out what to expect from each month of the year.

While many prefer to avoid the cold, there is a certain charm about cozying up in a warm coat and wandering through crisp, white snow, which tends to fall most often in January.

Most points of interest are also far less congested, making it a great time to visit, especially for those looking to avoid the crowds of the big cities. The few exceptions are the country’s ski resorts, which are excellent sites to partake in a number of snow activities, such as skiing, snowboarding and sledding. Visitors can also enjoy South Korea’s efficient transportation, which still runs like clockwork despite icy conditions. 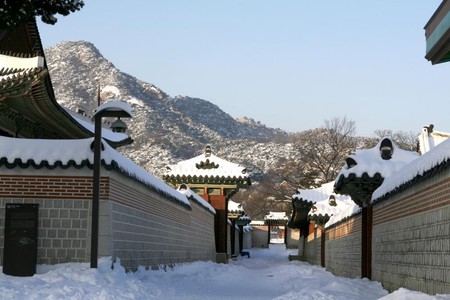 The Korean winter is long and cold, extending until late February. Nevertheless, visitors can still enjoy the country’s many indoor facilities such as theme parks, museums, restaurants and jjimjilbangs (Korean spas) – many of which are connected directly to the subway, eliminating the need for walking outside in the frigid weather. Furthermore, shopaholics can take advantage of the huge sales that are held nationwide at mega-malls and department stores throughout this month.

The effects of the Siberian weather system are more pronounced the further north you go, so, for the warmest temperatures, stick to the southern areas, such as the coastal city of Busan or the beautiful Jeju Island.

As spring sets in and temperatures begin to warm up, locals head for the mountains, making use of the country’s many national parks, which are canopied in colorful wildflowers. The effects of the change in weather can also be seen in a number of unique festivals such as the Jeju Fire Festival and the Jindo Sea Parting Festival.

Be mindful, however, that during late March, temperatures can unexpectedly drop again, so it’s always a good idea to dress in layers. In fact, Koreans use the poetic expression “Ggot saem chuui” (“The winter is jealous of flowers”) to describe the fickle weather. 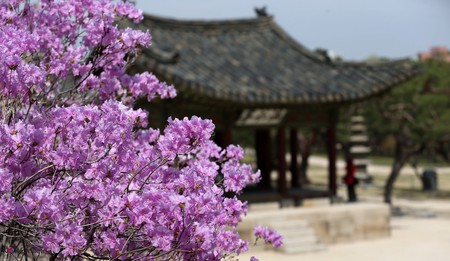 Japan’s cherry blossoms may be legendary, but Korea’s blossoms are also a sight to behold. Multiple cherry blossom festivals take place during the first and second week of April as lakes, paths and parks are beautified by seemingly endless canopies of blooms.

The caveat: April is also the time of year when the notorious yellow dust from the Gobi Desert covers the Korean peninsula, creating an unwelcomed haze and dustiness. Avoid this month if you have allergies or be sure to bring a supply of masks.

May’s weather is the least likely to be inclement, making it one of the most popular months of the year to visit South Korea. Hotel and plane ticket prices are also very manageable, but it’s advisable to book early, as the country’s numerous springtime visitors can limit your lodging options.

Take advantage of the mostly sunny days to enjoy the great outdoors. There are plenty of events and festivals to experience, with the Damyang Bamboo Festival and Boseong Green Tea Festival in Jeollanam Province being local favorites. 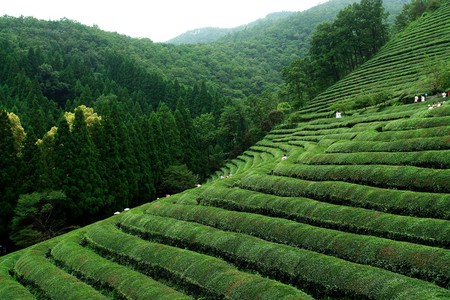 Like May, June is a great time of the year to avoid the crowds and enjoy the still-mild weather, particularly in Korea’s coastal regions, which tend to become overcrowded with tourists in July. Evenings can be cool, so it’s not a bad idea to carry a light jacket when headed out to dinner or a night out on the town.

Summers in Korea can be intolerably hot and muggy, so you might just find yourself hopping from one air-conditioned venue to the next. The country’s monsoon season also begins in late July, and showers can be intense and long, with many lasting all day.

The heat and rain can be a deal-breaker for many, but for those not fussed by weather, July can be a very fun time to visit. Music festivals like Ultra Korea and the Incheon Pentaport Rock Festival, and cultural events like the Boryeong Mud Festival and Sinchon Water Gun Festival, are on just about every weekend and make for a great way to beat the heat. 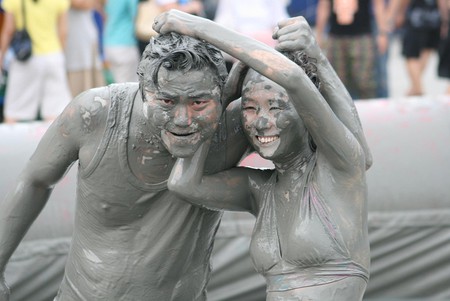 While the scorching heat makes August a great month to hit Korea’s beaches and water parks, it is also summer vacation for most Korean schools, universities and companies. Therefore, restaurants, shopping centers and cultural complexes can be overly crowded. With a growing love for staycations, hotels are also at full occupancy and certain amenities like swimming pools are virtually impossible to access.

South Korea is less vulnerable to typhoons than neighboring countries, but typically one to three typhoons can be expected per year. They usually pass over South Korea in late summer, especially in August and bring torrential rains, so don’t leave home without a sturdy umbrella and a raincoat.

September is one of the most unpredictable months of the year. The early days of the month can be some of the hottest of the year while the latter days can be chilly and autumn-like. Consider bringing a few items that can be layered depending on the temperature.

As the country gets ready for fall, events such as the Andong International Mask Dance Festival and Hyoseok Cultural Festival provide plenty of fun activities for families and individuals. 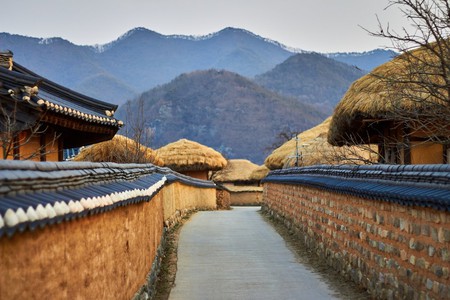 With nearly perfect weather and a wealth of events and festivals such as the Busan International Film Festival and Jinju Lantern Festival, October is without a doubt one of the best months to visit South Korea.

Korea’s mountains erupt in a magnificent array of reds, yellows and oranges, and locals flock to national parks to take in the technicolor landscape of natural beauty. Schedule your trip to enjoy the changing of the leaves, especially enjoyable in the Seoraksan and Bukhansan mountain regions.

T-shirt weather can continue well into October, but you’re likely to need a few extra layers by this month.

Like October, November is known to have mild temperatures, low rainfall and a wealth of unadulterated natural beauty. Enjoy the crisp, cool air as you marvel at the colorful lights at the Seoul Lantern Festival, or try your hand at kimchi making at the Seoul Kimchi Festival. 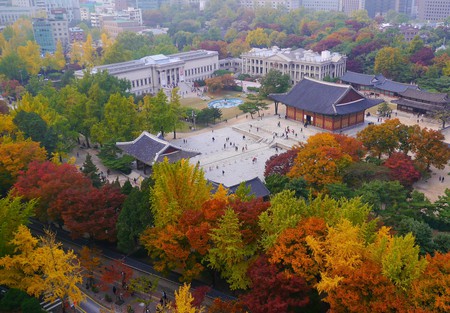 For those who don’t mind the cold, December is also a fun time to visit. Sure, there’s the cold, which can be excruciating on certain days, but there’s also snow, festive decor and lots of merrymaking.

While businesses shut down for Christmas in many cities worldwide, larger businesses in Seoul boom with festivities throughout December and rarely close for the holidays.

Seoul can be a tough place to visit during the dog days of summer or the brutally cold days of winter, depending on where you’re coming from and what you’re used to. In general, late summer (late July to late August) is very hot and muggy, not to mention rainy, which could make sightseeing a hassle. Similarly, late winter (early January to late February) can be very cold and dry, making visiting outdoor destinations uncomfortable for some.

South Korea’s two main holidays, Seollal (Lunar New Year), which usually falls in January or February, and Chuseok, which takes place in September or October, are some of the busiest times for domestic travel since people flock to their hometowns to visit family. This can make travelling around the country nearly impossible if not planned months in advance. Furthermore, many attractions are closed during these days, and Seoul becomes unusually quiet.