Watch: Psy's 'Gangnam Style' Made a Comeback at the Winter Olympics Opening Ceremony 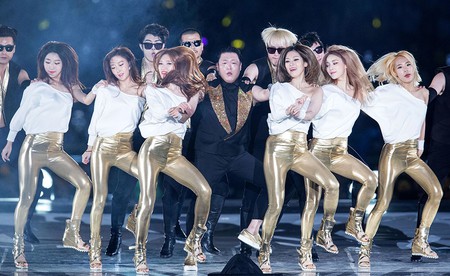 It’s been almost six years since Psy’s ‘Gangnam Style’ became a viral hit, but the K-pop star made an unlikely comeback when the track was played during the Winter Olympics opening ceremony.

The Games, which are being held in South Korean city PyeongChang, used an extended K-pop medley to soundtrack the entrance of some of the Olympic teams.

The USA delegation were the lucky ones who got to walk into the stadium while Psy was blasted out.

Other K-pop groups like Twice, BTS, Bigbang and Red Velvet also had songs chosen for the Parade of Nations during the opening ceremony on Friday.

Kpop songs used as background music at the Olympics during countries’ parade (in order):

The USA team was led by luger Erin Hamlin while Vice President Mike Pence watched in the crowd.

"Do they call this K-pop?" the CBC's Scott Russell wonders out loud, as "Gangnam Style" plays during the Parade of Nations.

If you were keeping track, it took a full 36 minutes for Gangnam Style to play. Organizers showing much restraint.

The singers held hands while they were surrounded by spectators holding candles.