Watch: Marvel at the Perfection of K-Pop Band BTS Without Autotune 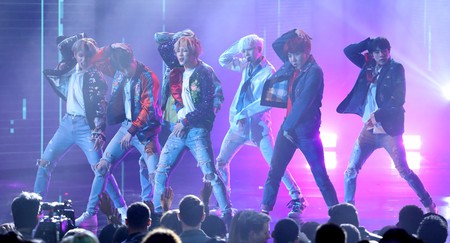 K-pop is known as a genre which goes a little crazy with the autotune, so sometimes it’s nice to let the singers’ voices shine through – especially if they’re everyone’s favourite boyband, BTS.

Jin, J-Hope, Rap Monster, Suga, Jimin, V and Jungkook made their US TV performance debut last week at the American Music Awards (AMAs) and got a standing ovation for their rendition of DNA.

Even though their performance was a winner, some very clever fans have taken it one step further and stripped away the autotune so that we can hear just how brilliant they were.

Rap Monster said of their performance: ‘The AMAs didn’t treat us as a curious novelty from Asia, but showed us respect and treated us as an important part of the show.

‘They put our performance right before Diana Ross, and we were introduced by the Chainsmokers, who are very popular in the United States. It was clear in many ways that they knew a lot about us and had prepared for our appearance for a long time.’

BTS are the first K-pop group to have ever performed at the AMAs, which took place on Sunday.

Here’s how their performance sounded:

Bandmate J-Hope told K-pop website Soompi: ‘To actually be invited to the AMAs, an awards show that I’d only ever seen through videos, and to perform there, with so many fans coming to see us and cheer us on, it was a really new experience.

‘It was an honour. If the opportunity should arise, it would be great if we could put on an awesome performance at next year’s AMAs as well. We are so grateful to our fans.’

The band were accused of lip-synching during the AMAs, but this clip should kill those rumours stone dead.

These guys are the real deal.