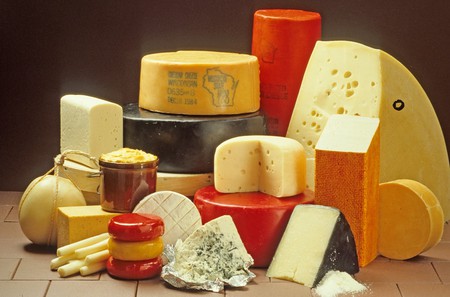 Cheese-lovers, hold onto your hats – in South Korea, there’s an entire theme park dedicated to the delicious dairy product, and it’s everything you ever dreamed of. Imsil Cheese Theme Park boasts 32 acres of cheese-related goodness, including a cheese experience centre, buildings shaped like giant wedges of cheese (hello, perfect Instagram photo-op!) and a ‘cheese playland’ which has a number of tiny cheese-themed rides.

The park also runs workshops where you can learn to make your own cheese, has a milk processing factory on-site where cheese is made, and — if you’re worried about cheese withdrawal after leaving the park — there’s an enormous shop where you can stock up on cheesy goodies.

Cheese is a fairly recent addition to South Korean cuisine, and wasn’t popular in the country — or, indeed, available — until after the Korean War. In 1958, a Belgian priest called Didier t`Serstevens (who now goes by the Korean name Ji Jeong-hwan) arrived in Korea. He was first sent to Buan County, in North Jeolla, and did missionary work there; in 1964, he was moved to a smaller, poorer parish in Imsil County. Seeing the area’s lush, grassy hills, he thought of helping the parish’s struggling economy grow by raising two mountain goats. He spent the next three years building a cheese factory and honing the process, including travelling to France, Italy and his home country to learn European cheese-making skills. This research continues; the park includes a lab dedicated solely to improving cheese-making methods.

Since then, Imsil has grown to become South Korea’s ‘cheese region’. Imsil Cheese now has over 20 franchises and 70 brands, and the region attracts around 200,000 cheese-loving tourists every year. Imsil Cheese Theme Park has helped drive this tourism — the park was opened in 2004 and has been a popular destination ever since.

. Day 956 Imsil Cheese Park, the perfect place for someone who likes cheese. With the architecture of european small city, you can experience making mozarella cheese, pizza and many other fun activities. . . . . . #감성#사진#여행#일몰#맞팔#소통#선팔#스냅#좋아요#색감#컨샙#인친#임실 #ig_korea#petitejoys#travelbug#way2ill#phculture#passionpassport#mkexplore#landscape#rufustory#rufusinkorea#wanderlust#landscapephotography#naturelover#naturephotography#natureshot#imsilcheese

Cheese has also transformed much of South Korea’s food landscape. It’s now one of the most widely consumed foods in the country, and can be found in many traditional foods — cheese tteokbokki (spicy rice cakes), cheese dakgalbi (spicy chicken ribs) and bibimbap with cheese are all hugely popular. Korea’s first pizza restaurant opened as recently as 1972, using Imsil cheese; today, there are pizza restaurants everywhere in Korea. At Imsil Theme Park, oodles of cheese-based foods are on offer, including the delicious-sounding gold rice pizza.

If this all has your mouth watering, perhaps it’s time to book a ticket to South Korea. Get your camera at the ready, and be ready to eat a lot of cheese — now that’s a holiday we can get on board with!