The Most Romantic Spots in Jeju 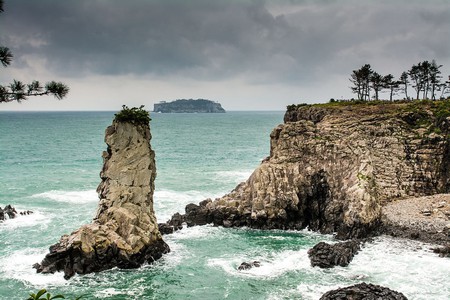 Jeju, South Korea. The island is known for its breathtaking scenery | © Voyagista / Flickr

Located off the Korean peninsula’s southern coast, Jeju is Korea’s largest island. It also packs a punch in terms of loving — it’s Korea’s unofficial ‘honeymoon capital’ and is a popular holiday destination for couples of all ages. But what, exactly, makes this island so appealing? Read on for our guide to Jeju’s most romantic spots.

One of Jeju’s main attractions is the clear, emerald-blue sea which laps round its shores. This is set off to great effect by Woljeongri Beach’s white sands and surrounding landscape, making the beach a perfect spot for walks along the waterfront. Woljeongri is also surrounded by a number of very good cafes.

What could be more romantic than looking at the stars? At Jeju Starlight World Park and Planetarium, you can take advantage of Jeju’s low light pollution to see the night sky in its full glory. Built in 2009 to advance astronomical study, it’s now a tourist attraction which includes an observatory, planetarium and exhibition hall. It’s open in the daytime as well, but — for obvious reasons — it’s best to go at night.

A UNESCO World Heritage Site, Manjanggul Cave was formed through volcanic activity. The wide tunnels of the cave were created as red-hot lava flowed through rock during an eruption. These lava tunnels have a unique and interesting shape, and the whole cave complex is 13,422 metres, making it one of the largest of its type in the world (although only one kilometre is open to the public). The cave is softly lit and filled with rock pillars and stalactites. 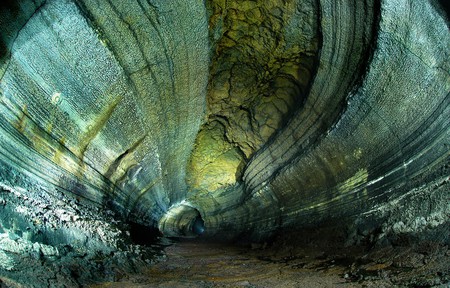 Located in the rather lovely town of Seogwipo, which has lots of interesting art, souvenirs and cute cafés, Cheonjeyeon Waterfall is a three-tier waterfall. Cold water cascades from a cave, down into pools, then finally into the sea below. Look out for Cheonjeru Pavilion, and Chilseonyeogyo, also known as the Seven Nymphs Bridge; according to myth, seven nymphs would descend from heaven every night to bathe in the waterfall’s clear pools. The red and white arched bridge is easily recognisable thanks to the seven nymphs carved on each side. The waterfall is surrounded by green woodland.

Seongsan Ilchulbong, also known as Sunrise Peak, is a tuff cone crater formed by underwater volcanic eruptions. Like Manjanggul Cave, it’s a UNESCO World Heritage Site, and a popular hiking trail is along the crater’s grassy rim. The 182-metre high crater commands a stunning view onto the ocean, and is one of the best places to see sunrise on the island. On New Year’s Day, thousands of visitors climb up before dawn to see the first sunrise of the year from the peak – it’s believed that this will bring good luck for the coming year. Watching the dawn break at this famous spot is a very romantic thing to do with your partner. 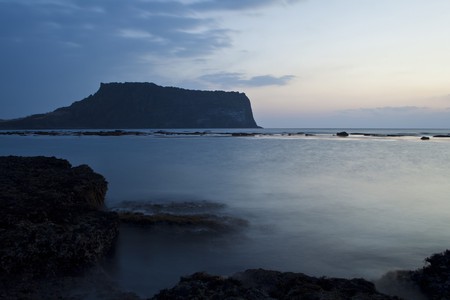 Jeongbang Waterfall is another beautiful natural spot on Jeju Island — which is, after all, known for its stunning scenery. What makes Jeongbang special is that it’s the only waterfall in Asia to descend directly into the ocean. It’s also 23 metres tall, which makes for a rather breathtaking sight. An observatory at the top of the cliff allows visitors to take in the expansive sea view.

Perhaps not one for the traditionally romantic, but definitely a popular spot for honeymooners and couples, Love Land is a sculpture park devoted entirely to love — in its more carnal aspect. Over 140 sculptures throng the park, displaying various aspects on the theme of sensuality and eroticism. Open until midnight, the park makes for a memorable activity. Many of the artists displayed are graduates from Seoul’s prestigious Hongik University.