The Culinary Delights of Gwangjang Market 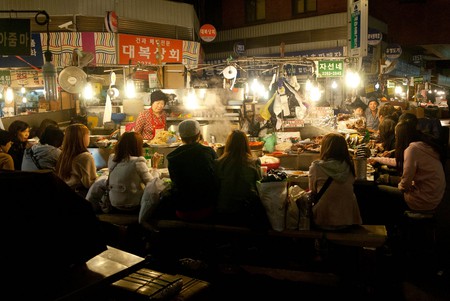 If you love Korean food, you don’t want to miss eating your way through Seoul’s century old Gwangjang Market. As one of the oldest continually functioning markets in all of South Korea, it’s a great place to soak up the country’s traditional culture and sample its gastronomic goodies, all under one roof. While there, be sure to check off the following list of must-try culinary delights.

Of all the foods Gwangjang Market is famous for, mayak kimbap has to be at the top of the list. The dish’s name, which literally translates to “narcotic rice roll,” refers less to its ingredients and has more to do with the addictive properties of these tasty little morsels. These sushi-like, seaweed-wrapped rolls are stuffed with carrot, pickled daikon radish and rice that has been seasoned with sesame oil and sprinkled with sesame seeds for added flavor. Smaller than traditional kimbap, they are formed into bite-sized pieces and are served with a mustard and soy sauce dipping sauce that will make it impossible to eat just one. 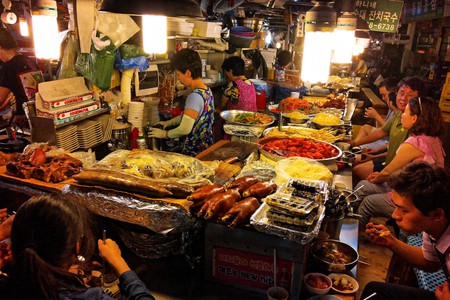 Another Gwangjang Market specialty is bindaetteok, a type of fried, savory pancake made from ground mung beans, various vegetables and meat. The tender, juicy meat is beautifully balanced by the crispy texture of the dish, while the flavors are rounded out with the soy sauce served on the side. Grab a seat at one of the many open stalls, or fight the tourists for a spot in line at one of the market’s many famous bindaetteok restaurants. 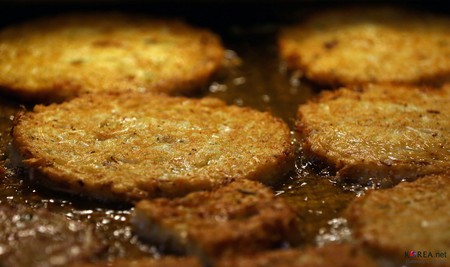 Of course, if you do eat bindaetteok, it’s obligatory that you wash it down with an icy bowl of makgeolli. This traditional alcoholic beverage is made from fermented rice, but unlike soju is not distilled. Milky in appearance, it is soft, smooth and perfectly fizzy – a great beverage to cool down with on a hot summer day, or as the Koreans do, on a rainy afternoon. At the market, it is often served in a bottle (be sure to shake it a bit before pouring) and is consumed from small copper bowls.

Korea’s version of blood sausage is made from cow or pig intestines that have been stuffed with various ingredients, usually cellophane noodles, barley and pork blood. When you order a plate of this beloved street food, vendors will remove one of the long sausages from the steamer, slice it into pieces and serve it to you topped with a few slices of lung, as well as some perilla leaves and chili salt to garnish. Chewy and juicy, soondae is Korean comfort food at its finest. 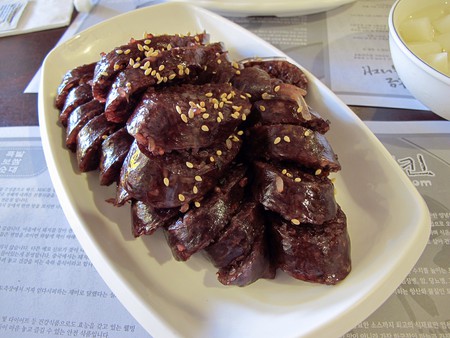 If you’re looking for something a bit heartier, try Gwangjang Market’s famous pigs’ feet, or jokbal. The process of preparing and cooking this comforting dish is extremely time-consuming, as all hair needs to be removed, while the feet must be washed thoroughly and boiled until tender. The result is soft, flavor-packed slices of meat that are at once savory and sweet. It is generally served on a platter alongside saeujeot, fermented shrimp sauce, and makes for a great drinking food, hence its popularity with the after-work crowd. 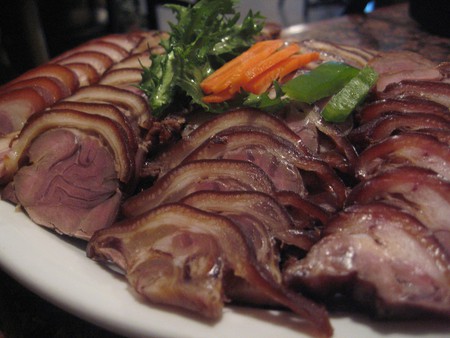