The Best Places To Eat in Myeongdong 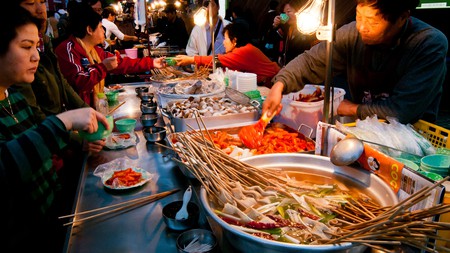 Here are the best spots to fuel up on food in Myeongdong, Seoul | © SFL Choice / Alamy Stock Photo

Discover where to go for food in Myeongdong – from budget street eats to glamourous hotel restaurants.

If you know Seoul, you know that Myeongdong is synonymous with one thing: shopping. A bustling downtown area in the heart of the city, it’s the place to go for beauty products, clothes and skincare. Up to 2 million people visit here every day.

Whether you’re hunting for bargains at the underground market, trawling through high-end brands in a mall, browsing international stores or simply here to soak up the atmosphere, you’ll need all the energy you can get. Here’s your guide to the best places to fuel up, whatever your budget (and whatever the time of day).

As Myeongdong is such a popular destination for foreign tourists, a few places on this list cater mainly to international palates. Others will give you a taste of traditional Korea, and a few are so hidden away that (almost) only residents patronise them. What do they all have in common? Mouthwateringly good food. 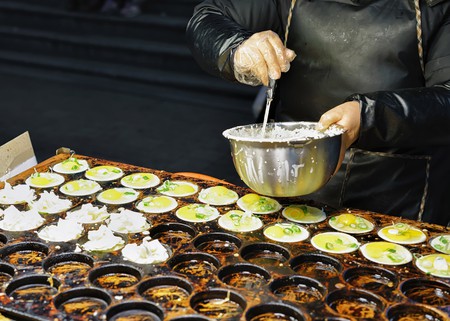 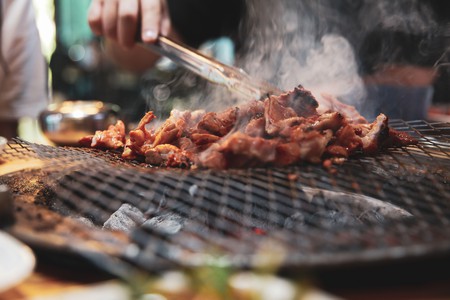 Soak up the atmosphere at Myeongdong Food Street 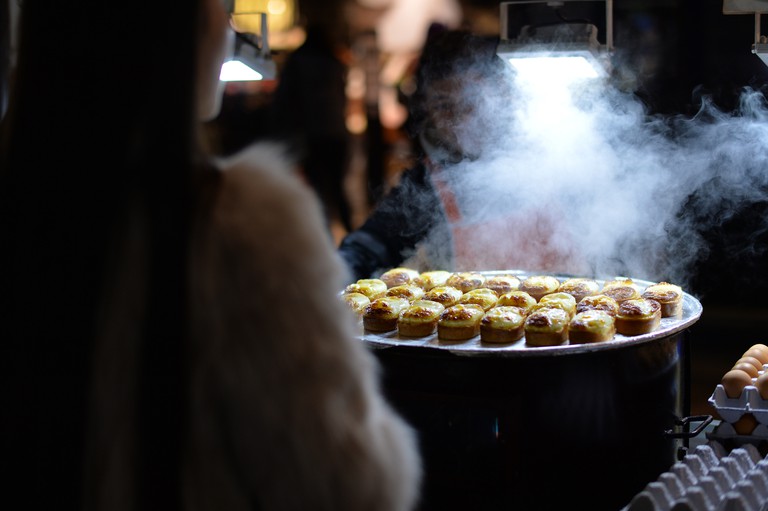 If you’ve never eaten in Myeongdong before, this should be your first port of call. Fill up on traditional Korean snacks, such as hotteok (sweet, chewy pancakes), tteokbokki (rice cakes in a spicy sauce) and gimbap (fillings, rice and seaweed rolled into a cylinder), or try more exotic treats, like strawberry mochi, grilled lobster and matcha ice cream – the choice is yours. It’s best experienced in the buzz of the early evening. Alleys leading off the main street are just as exciting, and food can be a little cheaper than along the main drag.

This well-known spot is a Michelin Bib Gourmand restaurant, meaning that it’s been singled out as offering great value food. Expect to pay around 10,000 Korean won (£6.91) for a meal here. It has unassuming decor and a simple menu, comprising just four dishes. But people don’t come here for the ambience – they come for the quality of food. Everything’s made in-house, including the kimchi (which is seasoned with liberal quantities of garlic and sea salt, and fermented for at least three years). Myeongdong Kyoja claims to be the origin of kalguksu (a soup made with flat, knife-cut noodles), which is the restaurant’s speciality dish. It’s been a family-run establishment since its opening in 1966, and today, it has a second branch nearby (8 Myeongdong 10-gil).

It’s a swelteringly hot summer’s day. What do you feel like eating? Well, if you’re Korean, you might go for a steaming bowl of samgyetang (ginseng chicken soup). Koreans say that you should “fight heat with heat” – essentially, sweat it out, which is believed to have numerous health benefits. The samgyetang here is unique, with a yellow-tinged, thicker broth. Its rich taste is due to a secret combination of herbs and mushrooms – with medicinal properties and flavours to bring people back for more. At Gobong Samgyetang, the samgyetang comes with a cup of ginseng wine. You can either pour this into the broth for added flavour or shoot it back neat.

Many residents say this is the best barbecue restaurant in Myeongdong, and it is targeted at them, evidenced by the fact that the sign is only in Korean. It’s worth searching for; look for traditional roof tiles and a black-and-white sign. It serves regular and black pork, plus beef, and the staff grill the meat in front of you. It’s a great place to try traditional samgyeopsal (grilled pork belly), served with salad and side dishes. Eat it the Korean way by wrapping the cooked meat in a lettuce leaf, with a dash of spicy gochujang (hot pepper paste). Yuk Tong Ryeong is generally busy – expect to wait for a table.

Dine at Toh Lim for views from the 37th floor

Looking to splash out? Head to Toh Lim, Lotte Hotel’s swanky fine-dining Chinese restaurant, for a meal with views over much of central Seoul, Namsan Mountain and Namhansanseong Fortress. Delicate Cantonese-style dishes appear on the menu alongside Korean-Chinese classics such as jajangmyeon (black-bean noodles – traditionally eaten by single people on 14 April to console themselves after not receiving gifts on either Valentine’s Day or White Day). Dress to impress, and expect to pay upward of 100,000 won (£69.03) per person. Private rooms are available.

Since 1966, Miseongok has served traditional seolleongtang – a Seoul speciality dish made by boiling ox bones for hours until the broth turns soft and milky. You’ll find seasonings like green onions at your table, allowing you to flavour it to your taste. Unless you like very bland food, this is an essential step. Miseongok isn’t very well known among tourists, but it’s famous with Koreans. It’s tucked away down an alley; look closely to spot the signage (in Korean) off the main street. There’s plenty of time to get your seolleongtang fix here, as it’s open until 10pm.

Get your porridge fix at Migabon Restaurant

Start your day well with a hearty juk (rice porridge) breakfast. Migabon Restaurant opens at 8am and serves more than 20 types of juk. Some highlights are the sweet, warming hobak-juk (pumpkin porridge) and delicately flavoured abalone porridge. It also offers samgyetang. The dining room has simple, traditional Korean decor. Note that it’s on the second floor; there’s a similar-looking restaurant below. Staff are friendly and used to dealing with foreigners – it’s very well-situated for shopping – but the food is also highly rated by Koreans, who describe the taste as “nostalgic”, “homely” and “like your grandma’s”.

Both Koreans and foreigners often think that The Sic-Ddang has the best value lobster anywhere in Seoul – it certainly has the best value lobster in Myeongdong. Plus, it’s halal, making the restaurant popular with Muslim visitors. As well as European foods, it serves Korean staples such as bibimbap (rice and toppings served in a bowl), bulgogi (a marinated beef dish) and pizza in the cosy interior. If you like your meals spicy and cheesy, you can’t go far wrong here. It’s above the Artbox shop and has friendly staff.

Sometimes you don’t need a full meal, only a little pick-me-up. And that’s exactly what you’ll find at this Korean dessert café, which serves up treats like bingsu (a shaved-ice confection with various toppings), waffles and high-quality drip coffee. Its house-made green-tea ice cream is a particular favourite. The café’s interior stretches over multiple levels and is modelled on the design of a hanok (traditional Korean house), with antique furniture and paintings upping the vintage feel. Mellow jazz background music creates a laid-back atmosphere. Coin Cafe is one of the oldest in Myeongdong.

Store
Facebook
Email
Twitter
Pinterest
Copy link
Share
Map View
Another spot with a relaxed atmosphere is the Innisfree Green Cafe, located in the Innisfree store. Like the brand’s beauty products, the café uses many fresh ingredients from Jeju Island; lovers of green-tea-flavoured treats, this one’s for you. It also serves possibly the fluffiest pancakes in Seoul. It has an indoor garden and air purifiers to transport you into a little oasis of nature. Food is plated in such an aesthetically pleasing way that it’s worth the usual short wait.
Open In Google Maps
13 Myeongdong-gil, Myeong-dong, Jung-gu Seoul, 100-021, South Korea
+8227760117
Visit Website
Give us feedback

For a step up from the tteokbokki on Myeongdong Food Street, head to Singsegye. Here, you’ll find richly flavoured, spicy tteokbokki, with chewy rice cakes swimming in a sweet, garlicky sauce. It also sells crunchy tempura, mandu (Korean dumplings), odeng (fish cakes) and sundae (blood pudding). Sinsegye Tteokbokki is a small stall – look for the red exterior. Seoul residents say this is the best place to get tteokbokki in Myeongdong.

Take a break at Ppalgangtteok

If you want street food but also want to sit down, visit this no-frills cafeteria to enjoy budget-friendly eats away from the bustle of the main drag. Ppalgangtteok is tucked away down a narrow alley, meaning that you might well be the only tourist here. Signs and menus are all in Korean, but pictures of each dish (and its price) adorn the industrial-chic concrete walls – the best strategy is to point at whatever looks tasty. As in many Korean eateries, you’re expected to help yourself to water and banchan (side dishes).