The Art of Lee Bul: Of Cyborgs, Monsters and Utopian Landscapes

South Korean Lee Bul is considered one of the foremost women artists from Asia to emerge in the international art scene in the 1990s. Her artistic practice represents humanity’s desire for a utopian existence. It’s a desire that is doomed to failure, but it is still driven by humankind’s wanton need for the realization of impossible dreams. We explore some of her most iconic works. 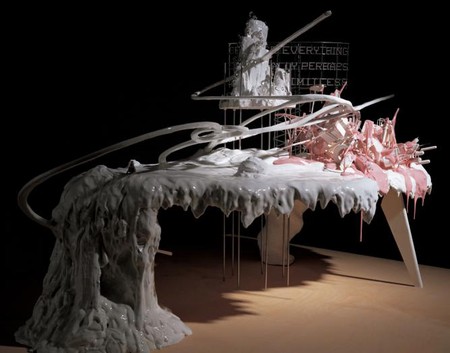 Lee Bul (b. 1964) is an iconoclast, whose creativity expands the visionary fantasies of humankind and of some of its most prominent futuristic and utopian thinkers. Born to leftist dissident parents in a remote village in South Korea during the military dictatorship of Park Chung-Hee, the artist majored in sculpture from Hongik University. In the late 1980s, she became prominent in the underground art circuit as a leader and founding member of Museum, a loose collective of idiosyncratic artists, performers and musicians still influential today.

Her sculptural training served as a launching platform for an oeuvre that would give form to some of the most futuristic and dystopian realities shaped by the human psyche. Lee’s artistic practice, encompassing performance, sculpture and installation, merges preoccupations stemming from the realities of a fast-changing, über-urbanizing South Korea with more universal dreams of conquest of the impossible. Exploring issues that range from gender roles in a masculine society to the failure of utopian dreams, her work presents a visual imagery that shocks, awes and makes rationality waver. In an interview with Barbara Pollack (PDF download) (Art+Auction, June 2008), Lee Bul says: ‘My work has always been a representation of a desire to transcend limitations. So the transition has been to move from the body to the broader idea of social structures.’ 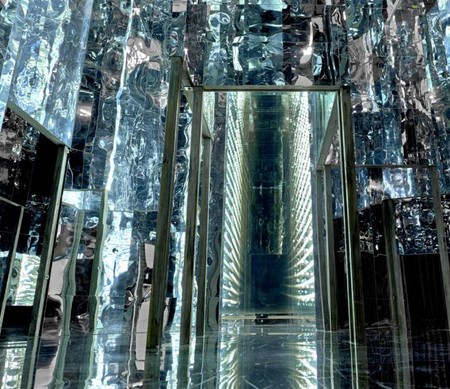 Soon after graduating, Lee Bul started incorporating sculpture into performative works. During a time of turbulence and change in South Korea, these performances reflected the political and social transformations in suggestive and allegorical ways.

In an essay for her Mori Art Museum (MAM) exhibition in 2012, Kataoka Mami quoted Lee: ‘Having to move around constantly in my childhood – my parents were trying to avoid political persecution – taught me certain strategies of survival. I learned that you can’t be a revolutionary and hope to survive, but that you can remain elusive, iconoclastic, alert to the fissures that you can penetrate in order to destabilise a rigid, oppressive system. On the other hand, I don’t think it made my art politically conscious in any overt way.’ 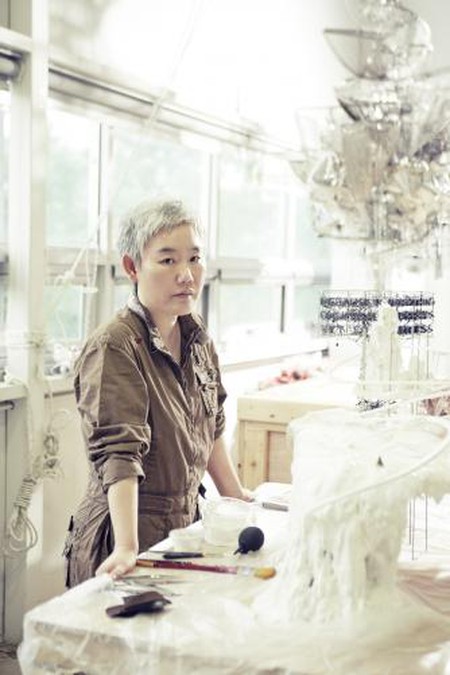 Her early piece Cravings (1989) integrated the artist body with a wearable sculpture that transformed her into a mutant, monstrous creature, with deformed and externalised internal organs and tentacle-like limbs, roaming the streets. The work reflected the anxieties and inner fears of the artist, as well as those felt by society at large in times of uncertainty and disquiet. In an interview with Seung-Duk Kim (art presse, May 2002), Lee said: ‘The ‘monstrous’ aspect of my work is about exceeding the prescribed boundaries, touching upon our fear and fascination with the uncategorizable, the uncanny.’

As a personalized metaphor for women’s experiences of a patriarchal social structure, her performance Abortion (1990) saw the artist tie and hang herself upside down from the ceiling. It represented her personal narrative about the experience of abortion, seeking to involve the community in the dialogue between body and self, performer and audience.

Transitioning towards an externalization of her practice, while still retaining an element of performance but with the absence of her own body, Lee Bul continued to question concepts of beauty, its transition over time and the social role of women through the introduction of elements of decoration, decay and odor. Winner of the 1998 Hugo Boss Award, unveiled at MoMA New York and subsequently at Harold Szemann’s Biennale de Lyon, her pivotal decaying installation Majestic Splendor (1997) featured real fish decorated with sequins, beads and gold flowers in a glass display case. The transition from beauty to ugliness and life to death were central aspects of this work, while the decorative materials were, as Bul says, ‘meant to interject an element of social reality into the work. They were signifiers of the dynamics of class, consumption, and production involved in a program of national economic development predicated on cheap, manual labor, usually done by women.’ 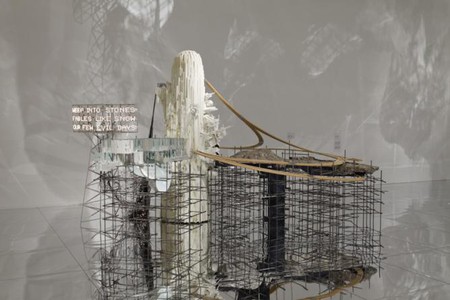 Transcending the Body: Cyborgs and Monsters

Lee Bul came to prominence with her renowned Cyborg series (1997-2011), which were tangible visualizations of the human desire for perfection and the ideal of merging machine with organism to transcend the limitations of the human body. As Woo Jung-Ah uncovers in the essay for Lee’s MAM exhibition, the series is inspired by a variety of sources, including Japanese anime, mythology, Fritz Lang’s Metropolis (1927) and Donna Haraway’s essay on cybernetic revolution A Cyborg Manifesto (1985). While Haraway’s cyborg is a creature in ‘a post-gender world’, Lee’s sculptures instead portray the imperfection of such dreams, with mutilated bodies missing limbs and heads. Made of silicon, a material used in plastic and cosmetic surgery, these works can be seen as an allegory of mankind’s search for the perfect body, as well as a commentary on the twisted perception of women’s role in society.

Expanding on the notion of mutation, Lee Bul created the Monster (1998-2011) and Anagram series (1999-2005). These biomorphic drawings and sculptures of organic structures are derived from insects and plants portraying a future evolution of species. 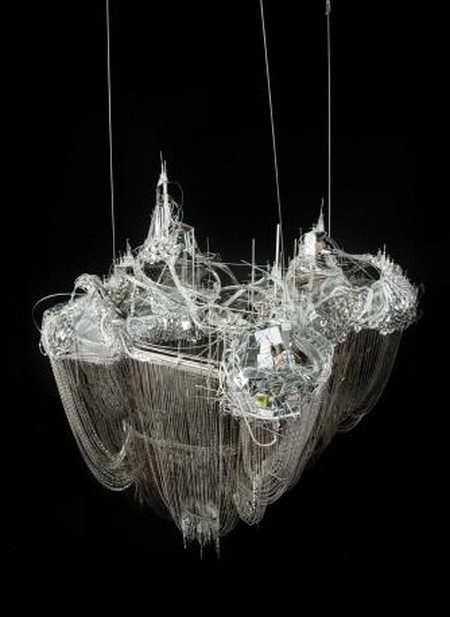 The Transmigration of the Body

Evolving from the interchangeable and eternal elements of mutation, Lee Bul’s Live Forever (2001) relies on a cliché of mass culture: the karaoke. Through the creation of karaoke pods, Lee misappropriates the body, transforming it into an empty shell that preserves only its sensory functions. Her karaoke works Gravity Greater than Velocity and Amateurs (1999) were chosen to represent the Korean Pavilion at the Venice Biennale in 1999. Two karaoke capsules, playing 1950s love songs and projecting her video Amateurs of schoolgirls frolicking in the forest, continued her exploration of the role of technology in human life. As Woo Jung-Ah wrote, the capsule experience presented a ‘hyper-reality, where experiences of desire, pleasure, and happiness might be more real and engaging than the mundane world of existence.’ 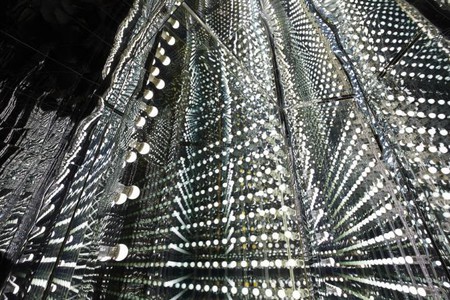 Continuing on her exploration of the impossibility of realizing human desire and the doom of failure, Lee Bul started constructing models of utopian urban landscapes that derive from modernist architectural designs. Figments of the imagination, these structures represent utopian dreams through dystopian hyper-realities. Incorporating architectural and urban structures, the installations seek the perfect society, but again they only point to its inevitable demise. Originating from her series Mon grand récit (2005-ongoing), the works expand on the post-modern notion of utopian life and visionary landscapes. Mon Grand Récit: Weep into Stones… (2005) is a surreal assemblage that combines geological and mineral forms with fragmented architectonic structures, which according to Wenny Teo (ArtReview, 12.09.2014) is ‘based on Hugh Ferriss’s otherworldly 1930 description of a skyscraper of the future.’ 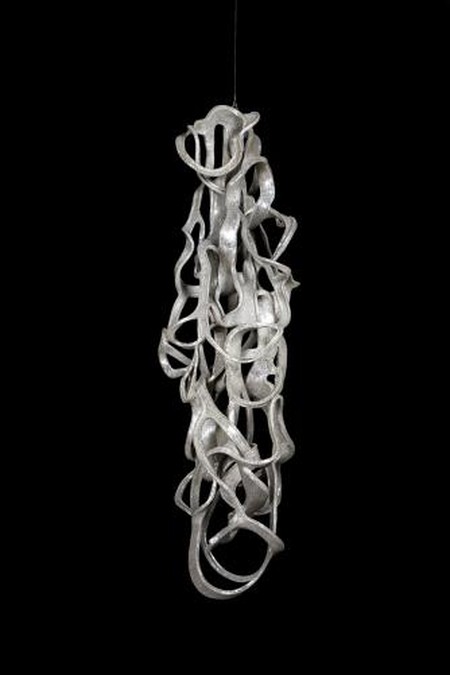 Lee Bul’s After Bruno Taut (Beware the sweetness of things) (2007) makes extensive use of chains, beads and glass. It is reminiscent of The Crystal Mountain by German visionary architect Bruno Taut, known for his Glass Pavilion (1914). The architectural elements in her work still function as allegories for the state of society and humankind’s desires for perfection. Via Negativa (2014) is an immersive installation, featuring a labyrinthine hall of mirrors that forms a futuristic environment as ‘a complex metaphor for the human mind.’ (PDF download)

In a 2007 interview with Grazia Quaroni, curator at Fondation Cartier, Lee said: ‘Visually, the most salient allegorical elements are architectural, because utopian aspirations often surface in architectural forms.’ As for utopia being within reach of humanity, Lee Bul commented: ‘I actually think this is an inherent condition of utopia – to always give us the feeling that it’s getting closer. So human beings are always fated to dream of it and to plan it. And yet we’re also fated to be disappointed by the inevitable realization that it’s unreachable. Still we dream. I’m fascinated by those failures, as well as the dreams that the dreamers knew could never materialize.’

Lee Bul professes a ‘stunningly pessimistic belief in progress’, as she told ArtAsiaPacific: ‘I hold a Borgesian view of history and civilization as patterns and repetitions. Any change we might perceive in the five minutes that we occupy, metaphorically speaking, in the aeonic expanse of history is illusory.’