The 15 Foods You Have to Eat in South Korea 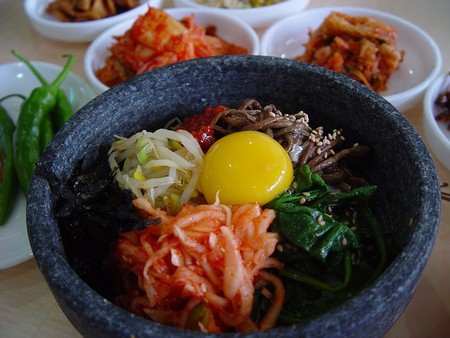 South Korea is a wonderland for people who love food. Everywhere you turn there’s an imaginative snack in a flavour you’ve never seen, a filling breakfast you want to eat forever and a scrumptious, flavoursome dinner than lines your stomach before a night of drinking soju. Read on to discover the foods you should definitely make stomach space for on your trip. 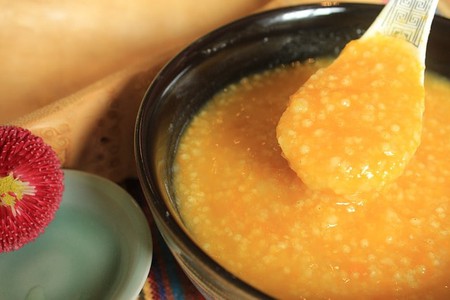 This sweet, nourishing dish is made from steamed pumpkin and has small, chewy glutinous rice balls floating in it. It’s flavourful as a filling, tasty breakfast, and can be served cold or hot. 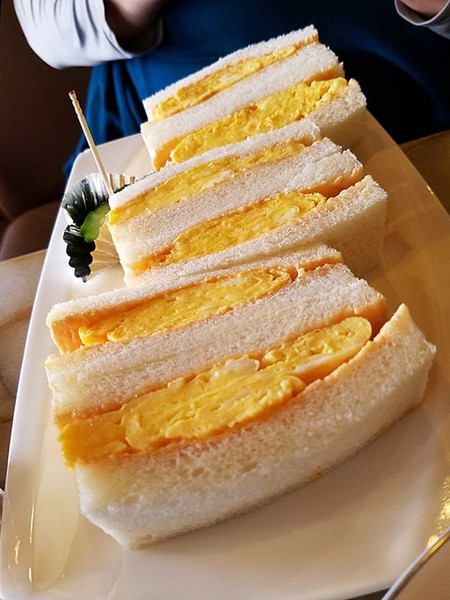 Traditionally a Korean breakfast is made up of rice, a bowl of soup and side dishes such as kimchi. But Western influence has meant that foods such as egg sandwiches are becoming more popular. The country has put an Asian spin on the dish, adding cabbage and a dusting of brown sugar to the toast and cooked egg.

This dish is often sold by pojangmacha (street vendors), and is very popular. Made of cylindrical rice cakes, triangular fish cakes and sweet, spicy chilli sauce, it’s toothsome and delicious. 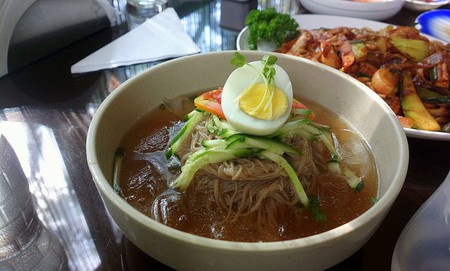 Chewy, buckwheat noodles are cooked and then plunged into icy water, before being drained and served with a beef broth with literal ice cubes in it. It’s topped with vegetables, an egg and sesame seeds. Chilly, yes, but it’s the perfect way to get your noodle soup fix in the boiling Korean summer.

A mixed rice bowl, this adaptable dish can include everything from namul (seasoned and sautéed vegetables), to meat, to soy sauce and gochujang (chili pepper paste) – and sometimes all these and more. It’s considered to be important to have at least five colours in the bowl, for variety and maximum nutrients. Often topped with an egg, it’s a traditional way of using up leftovers and must be fully mixed before diving in to eat it. There are plenty of regional variations, including the famous dolsot. This involves bibimbap being served in a large, heated stone bowl, so the ingredients continue to cook at the table and the bottom layer of rice becomes inviting brown and toasty. 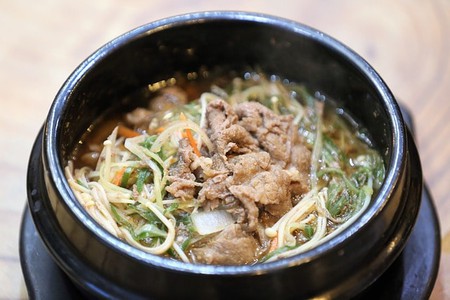 Korean barbecue is world famous, and rightly so. A savoury, juicy dish of sliced and marinated grilled beef, which is often cooked with onions and garlic to add flavour. Meaty and delicious, you can’t go wrong with it. 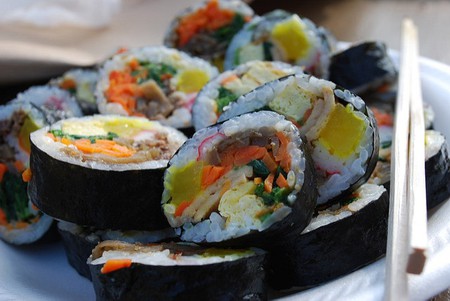 This seaweed and rice roll is called the Korean version of sushi, but that’s not quite right. While it is made up of rice and fillings rolled in a sheet of seaweed, it’s seasoned with everything from rice vinegar, sesame oil, sesame seeds, sugar, and salt rather than just vinegar, and is eaten without condiments such as wasabi and pickled ginger. The fillings often include pickled vegetables, radish, spinach and strips of egg. Inexpensive and ubiquitous, it’s a tasty and filling snack for everyday eating. 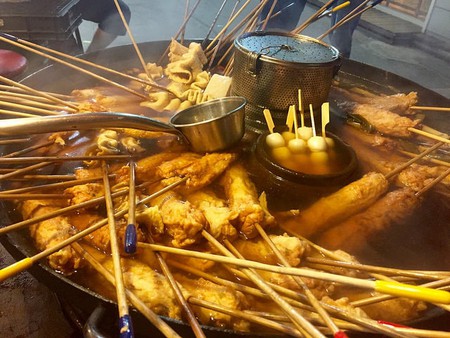 Similar to the Japanese oden, these are fishcakes served with the savoury broth that they’re cooked in. Cheap and warming, they’re often found as a street food and are served on skewers. 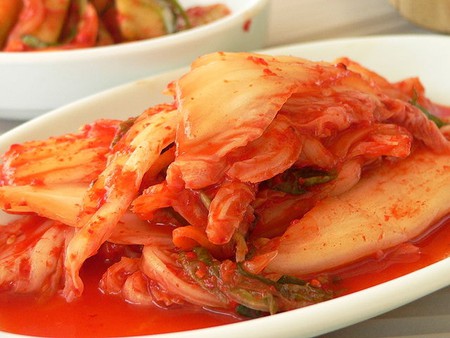 One of the oldest and most famous Korean dishes, kimchi is an institution and essential to Korean culture. It’s a spicy, sour dish made from salted and fermented vegetables. Mostly frequently made from cabbage, it can also include radish and is seasoned with onion, garlic, ginger and chilli. It’s high in nutritional value and fibre, and low in calories and cost. Without kimchi, a meal is considered to be incomplete. 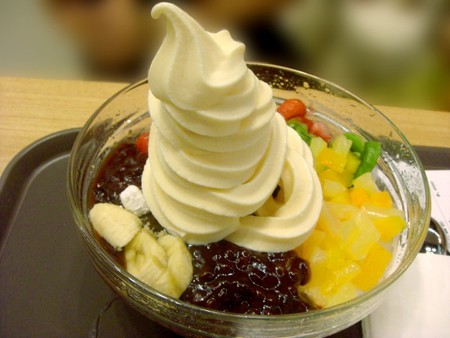 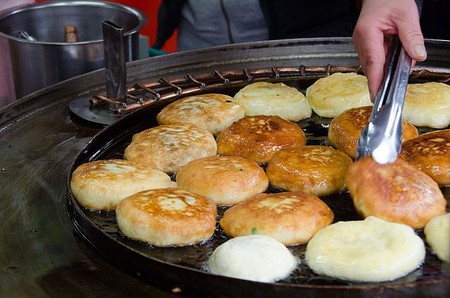 These sweet pancakes filled with melted brown sugar are best straight off the grill, when they promise a delightful sugary mess and a potentially burnt tongue. 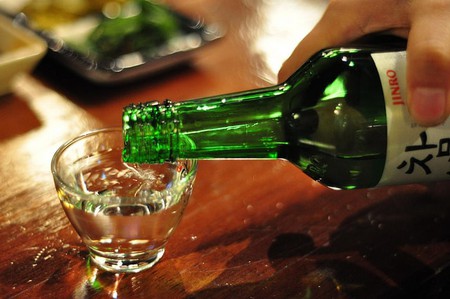 A clear, colourless alcohol beverage, Soju is made from fermented rice, wheat and barley. It’s a strong spirit that’s often drunk neat, in chilled shot glasses, but can also be made into cocktails or mixed drinks. It’s popular to mix it with beer, and a soju yogurt drink is also common. The alcohol content can range from 16-50%, and it tastes clean and neutral, like a sweeter, less aggressive vodka. 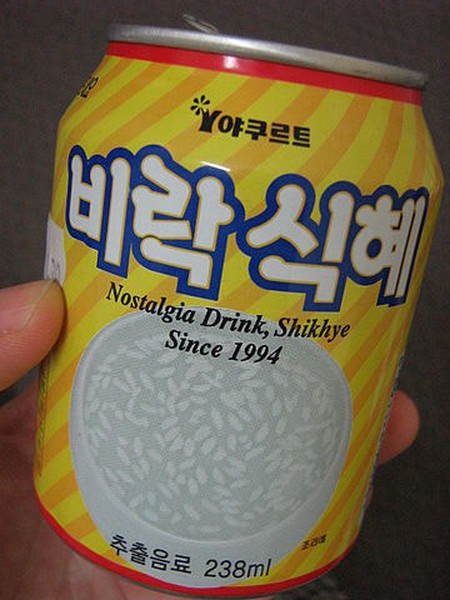 Made from malt water a cooked rice, this sweet, cold rice drink can be consumed as dessert. Believed to aid digestion, it’s often served after meals and different variations include ingredients such as pine nuts and pumpkin. 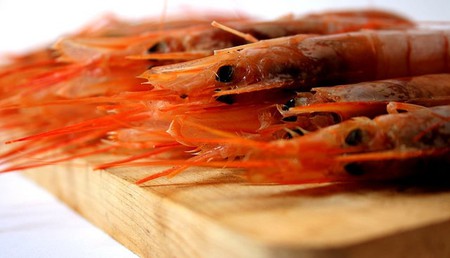 These chips and airy, light and shaped like a chip. They’re crunchy and slightly fishy in flavour from the shrimp. One of the most popular Korean snacks, you can crunch them by the handful. 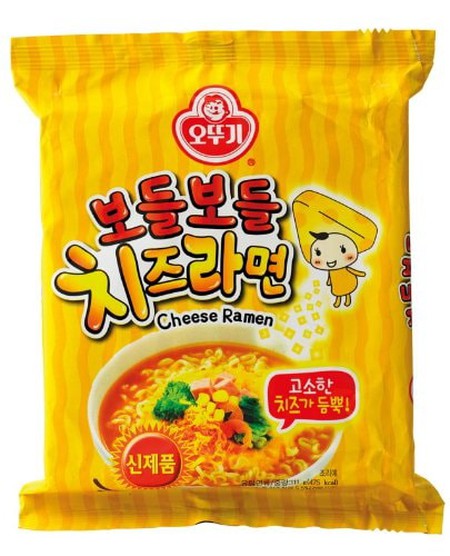 These are your standard ramen noodles, but with cheese! Rather than adding your own into the bowl, it comes with a packet of cheese powder as well as broth and seasoning. This creates a slightly thicker, richer and of course cheesier instant ramen experience than the one you’re used to.