The Best Restaurants in Insadong, Seoul 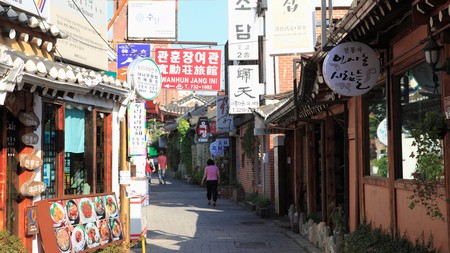 Insadong is known for its history, culture and art – plus a surprisingly diverse restaurant scene. Whether you’re looking for themed cafés, North Korean treats or the oldest restaurant in the country, you’ll find it in this Seoul neighbourhood.

Insadong is a mix of historical teahouses, traditional hanok buildings and a decidedly contemporary outlook. It’s a hotspot for art galleries – which exhibit everything from ancient Korean crafts to provocative modern art – and its pretty cobbled streets are always filled with visitors.

Like the area itself, Insadong’s restaurant scene is a fusion of old and new. This area is the place to go if you want to get a feel for old Seoul, but you’ll also find quirky themed cafés and innovative street food here. Head to buzzing Ssamziegil, a shopping complex covered in colourful graffiti and bursting with independent stores, for a sense of how Insadong’s creative culture translates into the present day.

Another important element in the mix is Buddhist culture. Insadong is home to Jogyesa Temple, the centre of Korean Zen Buddhism. According to these teachings, monks and nuns follow a vegan diet that also excludes “impure” vegetables, such as garlic, onions and coriander. Today, temple food is a distinct branch of Korean cuisine and a must-try for visitors, as it reimagines ordinary vegetables in creative, surprising ways. Expect subtle flavours to be brought out and creative pairings unlike any others.

Korean temple cuisine is very closely related to food found in historic Korean royal courts. As court maidens aged out of royal service, they often became nuns, taking their cooking techniques to the temple with them. Insadong’s temple food restaurants are, therefore, well worth a visit for even the most voracious meat-eater.

Many of Insadong’s best restaurants are tucked away in narrow alleys or behind unappealing signage (don’t let it fool you). Below are 11 locally recommended dining establishments. 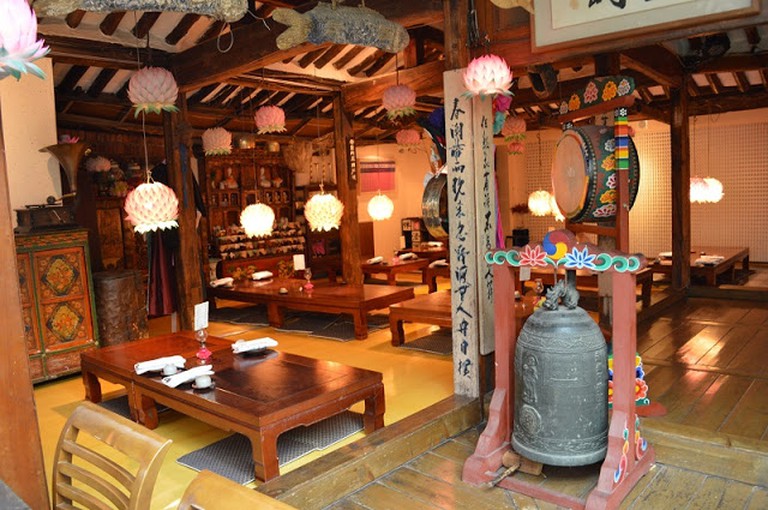 Opened by a former Buddhist monk, all of Sanchon’s food adheres to traditional temple food traditions. It has a set menu, which is pricey for Seoul (lunch is 33,000 South Korean won (£21.40) per person, while dinner is 45,000 won (£29.20) per person), but for this amount, you’ll get a seemingly endless stream of all-vegan tiny dishes (drinks are extra). During the day, it can be quiet; if you can, time your visit to coincide with the evening’s traditional dance performances, which start at 8pm.

Imun Seolnongtang was the first restaurant in Korea to apply for an official license, way back in 1904. Its house speciality – seolleongtang – is the same today as it was then. The restaurant is a little nondescript from the outside, with only a small sticker on the door signalling that it’s a Michelin Bib Gourmand restaurant (a label that denotes good-value food). Seolleongtang is an oxtail soup, traditionally made by simmering bones for 17 hours to create a milky white broth and then adding other cuts of beef for a rich flavour. You can (and should) season it to your taste with green onions and salt. It’s served with sides of kimchi and crunchy kkakdugi (diced radish kimchi).

Another Bib Gourmand recommendation, Gaeseong Mandu Koong is the place to go in Seoul for (surprise!) Gaeseong-style mandu (dumplings). It’s the closest, geographically speaking, that most visitors can get to Gaeseong itself – today, the North Korean city is virtually inaccessible to travellers. Koong was established in the 1970s when its founder fled the north during the Korean War. It’s now run by her family’s third generation, who preserve their grandmother’s recipes and techniques. Gaeseong mandu are known for their delicate flavours, with lightly seasoned pork, tofu, cabbage, leek and bean sprouts wrapped in a soft hand-rolled dough. Don’t leave your visit too late in the day – these dumplings are so famous that they sometimes sell out well before closing.

You can’t visit Seoul without trying Korean barbecue (unless you’re vegetarian – in which case, skip this one). Among the best barbecue restaurants in Insadong is 853; located in a traditional hanok building with exposed wooden beams and contemporary design, it’s also one of the most charming. It’s a little off the beaten track, making it a destination for those in the know. The star of the show here is samgyeopsal (grilled pork belly), cooked fresh at your table, but other cuts of meat are also available (expect to pay around 15,000 won (£9.75) per person). They’re all served with side dishes, including kimchi.

The dish that gives this restaurant its name is sujebi, a traditional soup made with hand-torn noodles. It’s cheap for Insadong – here, a bowl of sujebi will set you back a mere 6,000 won (£3.90). The other part of its name comes from hangari (also known as onggi) – the traditional Korean earthenware jars notable for their dark glaze and simple designs. You’ll see this type of pottery piled high on shelves lining the walls, giving the restaurant a cosy, homely atmosphere. Hangari Sujebi is tucked away down a small alley.

Are you a romantic at heart? Indulge your softer side at Miss Lee Cafe, where the walls and ceilings feature thousands of love notes, confessions and doodles (you can add your own). If you think this sounds like high school, it’s a deliberate theme. The café’s signature dish is dosirak, a metal lunchbox filled with white rice, seaweed, egg, sausage and kimchi – a meal Korean schoolchildren ate throughout the 1980s and 1990s. To enjoy your dosirak the traditional way, you should close the lid tightly and shake until well mixed. The café is on Insadong’s main street, and also serves bingsu (Korean shaved ice), other Korean sweets and teas.

Oh Se Gae Hyang is all about plant power

A must-visit for veggies, Oh Se Gae Hyang serves up vegan versions of traditional Korean dishes – from bibimbap and kimchi dumplings to bulgogi and Korean barbecue. There is a wide variety of options to choose from, all of which come with side dishes and tea. Inside, the atmosphere is peaceful and calm, with polished wood floors and plenty of plants. All seating is traditional Korean-style (low tables on the floor).

Ddo-Ong is located on the top level of Ssamziegil, a colourful shopping complex that twists in a spiral around a central courtyard filled with stalls and food. This quirky café is one of Insadong’s most famous modern attractions – not because of its food and drink but because it’s a poo-themed café. If your Instagram grid is missing a selfie of you sipping from a tiny toilet, then this is the place to go. While you’re up here, check out the views – Ssamziegil is one of the taller buildings in historic Insadong.

Balwoo Gongyang was the first Korean temple food restaurant to be awarded a Michelin star. It offers several set menus, all of which comprise a variety of tasting dishes. For something truly special, opt for the 95,000 won (£61.70) Hee (Joy) menu, which requires ordering at least a day in advance. Ingredients come from all around the country and vary according to the season. The restaurant is opposite Jogyesa Temple, on the fifth floor of the Templestay Information Centre.

Have something sweet at the Beautiful Tea Museum

Building, Museum, Shop
Facebook
Email
Twitter
Pinterest
Copy link
Share
Map View
Get your sugar fix at the Beautiful Tea Museum, which – true to its name – is located in a lovingly refurbished hanok building. Its airy, covered courtyard is a teahouse surrounded by exhibition spaces displaying information on Korean teas, various forms of Korean pottery and a shop where you can buy loose-leaf tea (samples often available) and tea-making implements to take home. It serves a dizzying array of teas – many of which are touted as having medicinal qualities, from reducing freckles to soothing irritable bowels. It also offers traditional Korean dashik (sweets to accompany tea) and bingsu.
Open In Google Maps
19-11 Insadong-gil, Insa-dong, Jongno-gu Seoul, 110-290, South Korea
+8227356678
Give us feedback 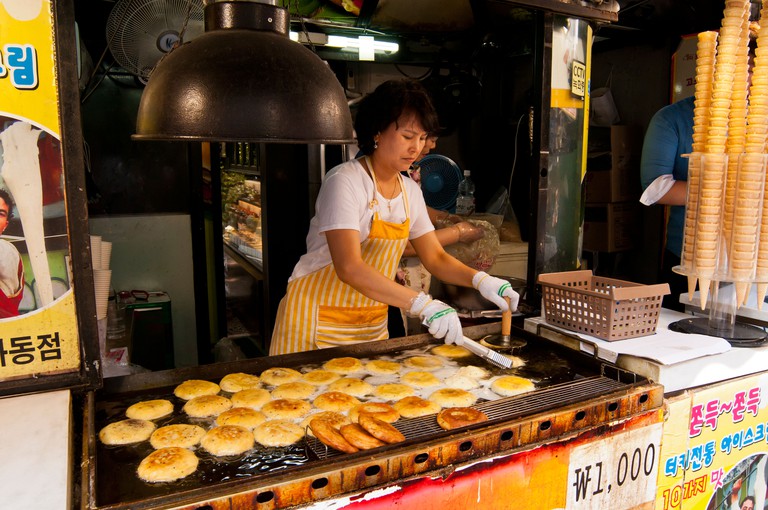 While not restaurants as such, you’d be foolish to skip Insadong’s street-food stalls. Some of these sell snacks that you can’t get anywhere else, such as dragon’s beard candy – honey stretched into long, thin strings and wrapped around a filling such as peanuts or chocolate. If you’re on a budget, you’ll find plenty of hearty dishes here, including the ubiquitous tteokbokki (rice cakes in a spicy sauce) and mandu. In the evening, Street Food Street is where you want to go; in the daytime, the best place to start is at the point where Insadong-gil meets Samil Daero.