Stories Told to Music: A Brief History of Pansori 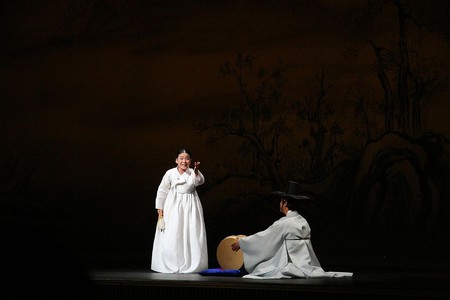 Proclaimed by UNESCO proclaimed as a “masterpiece of the oral and intangible heritage of humanity”, the pansori tradition is one of Korea’s proudest forms of entertainment. This form of musical storytelling dates back to the 17th century when it was used for shamanism.

While Pansori first arose in the Joseon Dynasty in the 17th century, it wasn’t until the 19th century that the musical storytelling reached its peak. For two hundred years, Pansori was mainly used by shamans to pass on rituals and spells from generation to generation. By the 19th century, it was especially popular among the nobles and a royal form of entertainment at court. However, it didn’t take long until Pansori was also performed to lower class people and the ordinary population. This was particularly due to Shin Jae-Hyo, who took upper-class melodies and lyrics and tweaked them to suit the tastes of the wider population. Shin Jae-Hyo then trained a group of women in the art of Pansori and went on to make it to Korea’s national music. 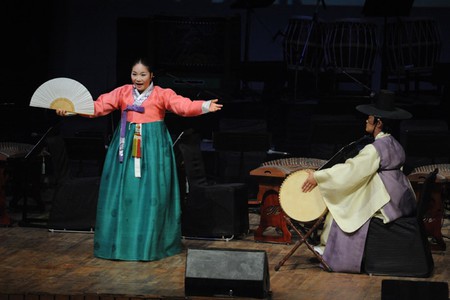 The 20th century has seen drastic changes in the history of Pansori. The Japanese invasion and westernization of the Korean Peninsula led to a decrease in performances. Modern sound reproduction technologies changed the habits of the population who now prefer to listen to modern music. After the Japanese invasion was over, the South Korean government realized the loss of Pansori heritage and declared the musical art form a National Intangible Cultural Property. Since the 1960s, Pansori has regained popularity and the efforts to keep it alive have never been stronger.

Originally, there were 12 sets of Pansori stories in the Joseon Dynasty, known as madang, or garden, stories. Today, only five of the original 12 are being performed. On top of that, the versions of the stories have greatly changed over the centuries and only parts of the individual works are performed.

A traditional Pansori performance consists of five elements: jo (melody), jangdan (rhythm); buchimsae (combination of story with music), je (Pansori school), and vocal production. Moreover, the two performers wear traditional Korean hanbok. While jo is similar to the key, it also includes the emotions and facial expressions of the Pansori singer. Adding to that is jangdan which refers to the rhythmic structure to express emotions in the story told. This element of Pansori is especially important to distinguish different characters in a story. Buchimsae is often called the ‘poetic element’ of Pansori as it refers to the act of combining words in the story with the melodies to set a theme and create a scene.

Thanks to the many efforts by the Korean government and UNESCO, Pansori is still considered to be the main traditional music type in Korea. Due to the open-stage concept of this form of traditional storytelling, the audience is encouraged to clap and dance along. Today, you can enjoy a traditional Pansori performance at Namsangol Hanok Village and Jeongdong Theatre in Seoul. 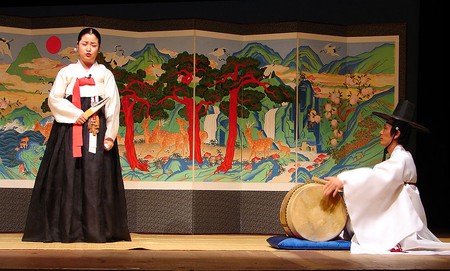 Pansori Performance | © Wikimedia
Give us feedback