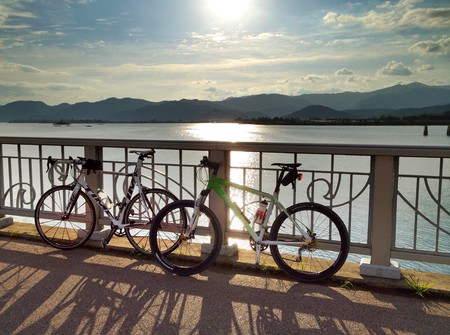 With more than a thousand miles of dedicated bike paths, South Korea boasts one of the most advanced cycling infrastructures in the world. This paved network of paths not only takes riders through the country’s most scenic natural landscapes but also some of its most remarkable cultural landmarks such as Buddhist temples and UNESCO World Heritage sites. Experience the true beauty of Korea by bike at these top cycling spots.

There’s no better place to take in views of Seoul’s unique skyline than the Han River, one of the most important rivers in the entire country.

Hop on the Han River bicycle path at Yeouido Hangang Park, a green space most known for its iconic cherry blossom trees that attract thousands in spring.

Yeouido is also a bike tour checkpoint – one of 40 in the country – that is designated by vintage telephone booths painted bright red. Here, riders can purchase a passport for a nominal fee in which they can collect stamps along the bike routes to earn a certificate and medal. The path heads out of town, becoming a two-lane bicycle “highway” along the Han River, with stunning views of the cityscape and the diverse environments it snakes through.

Stretching approximately 393 kilometers (244 miles), this path takes riders from the southern port city of Busan through Daegu and concludes in Andong, home of the Hahoe Folk Village and birthplace of jjimdalk (spicy stewed chicken).

Part of the 4 Rivers Cycling Trail – a series of breathtaking bike paths that zig-zag across the entire country from Incheon to Busan, the Nakdong River bicycle path is the longest of all the contiguous river paths in Korea. It takes about four or five days to complete, but can also be enjoyed in smaller segments.

The Geum River bicycle route is a relatively easy 146 kilometer (90.7 mile) jaunt that begins in Daejeon and passes by Sejong City before reaching Gongju, the second capital of the Baekje Kingdom. The route goes around the Gongsanseong Fortress, then continues on to the scenic banks of the Geum River before reaching the Baekjebo Weir near Buyeo.

In Buyeo, riders can delve into Korea’s rich history at attractions such as Baekje Cultural Land, Nakhwaam Rock and Gudeurae Park. After passing the riverside’s picturesque willow groves, bikers will reach Nonsan, which is famous for its fermented seafood market, before making their way to Iksan then Gunsan.

Spanning 133 kilometers (82.6 miles) along the Yeongsan River in Jeollanam Province, the relatively easy Yeongsan River bicycle route is situated on the embankment of Damyangho Lake.

In Damyang, the path links up to the romantic Metasequoia-lined Road and the bamboo groves of Damyang Marsh before nearing Gwangju’s downtown area. There, the Yeongsan River widens and then passes by Seungchonbo Weir, a site that is especially beautiful in the springtime when covered in canola flowers and pear blossoms.

The path continues on through Hampyeong, Naju and Muan before crossing the Mongtandaegyo Bridge. The path then extends along the 10 kilometer-long bank, also known as the Bicycle Highway and comes to an end at the estuary bank of the Yeongsan River in Mokpo. The route takes about two days to complete.

Get off the mainland and experience the beautiful beaches, amazing volcanic landscape and endless rows of tangerine fields on Jeju Island, South Korea’s largest island.

This prime cycling destination boasts a 244 kilometer (151.6 m), fairly flat path that circles the entirety of the island and can be completed in approximately five days. Most cyclists start their journey in Jeju City and head counter-clockwise around the island, passing through Hyeopjae Beach, Songaksan Mountain, Jeongbang Waterfall, Seongsan Ilchulbong and Udo Island.

For added convenience, the path is punctuated with affordable guesthouses and fantastic places to eat that are sure to make the journey even more memorable.