Surrounded by water, the Korean peninsula is outlined by a number of coastal cities that offer a welcome escape from everyday inland life. Offering everything from sandy beaches to gorgeous seascapes, these coastal cities are the country’s most beautiful.

Situated on South Korea’s eastern coast, Sokcho is widely known for its white sandy coast that is punctuated by picturesque pine trees. Located near the Sokcho Express Bus Terminal, Sokcho Beach is as accessible as it is beautiful. Here, visitors from all over the country partake in beach swimming in the summer months, while the Haedoji Sunrise Festival is held on New Year’s Day. Visitors can even rent a rod and go fishing at nearby Jodo Island, or head to the pier to get some fresh sushi at one of the many local fish markets. Hiking enthusiasts will enjoy exploring Sokcho’s Seoraksan Mountain – one of Korea’s most celebrated – which features well-maintained trails and breathtaking autumn foliage. 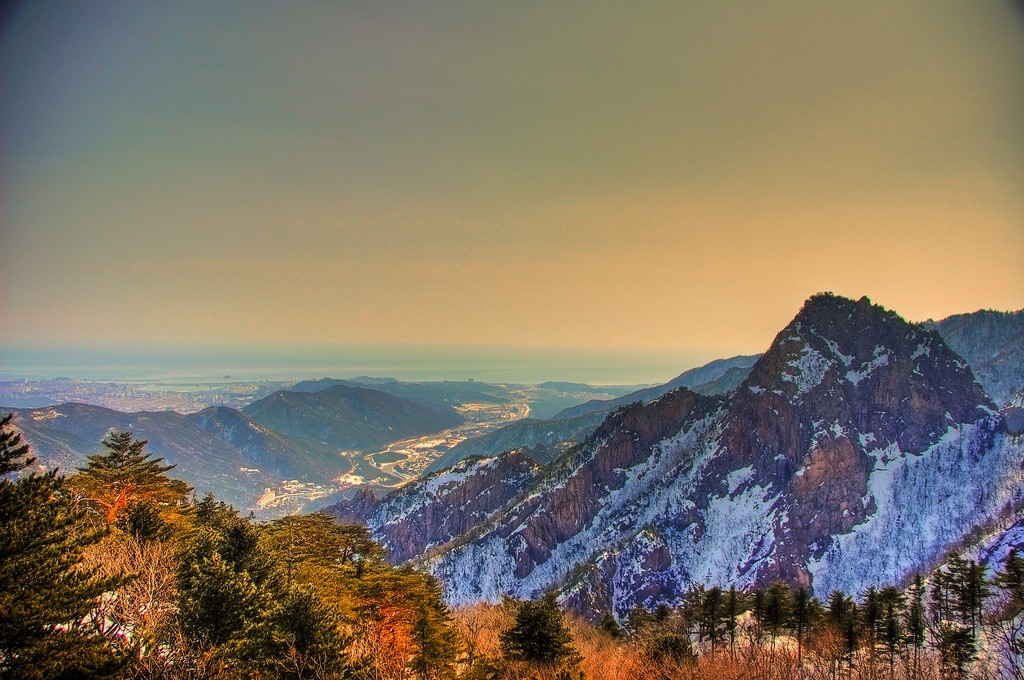 Gangneung’s six-kilometer-long Gyeongpo Beach is much loved for its fine sand and numerous facilities. But it’s also famous for its picturesque sunrise and tranquil moonrise, making a great camping spot. In addition, the beach is the site for various cultural events, including beach festivals and cherry blossom viewings. While Gangneung’s beaches and are splendid, the city’s parks are also worthy of exploration. Kids will love the submarine and decommissioned warship on display at Tongil Park, while adults will appreciate the dramatic architecture and contemporary works at Haslla Art World. 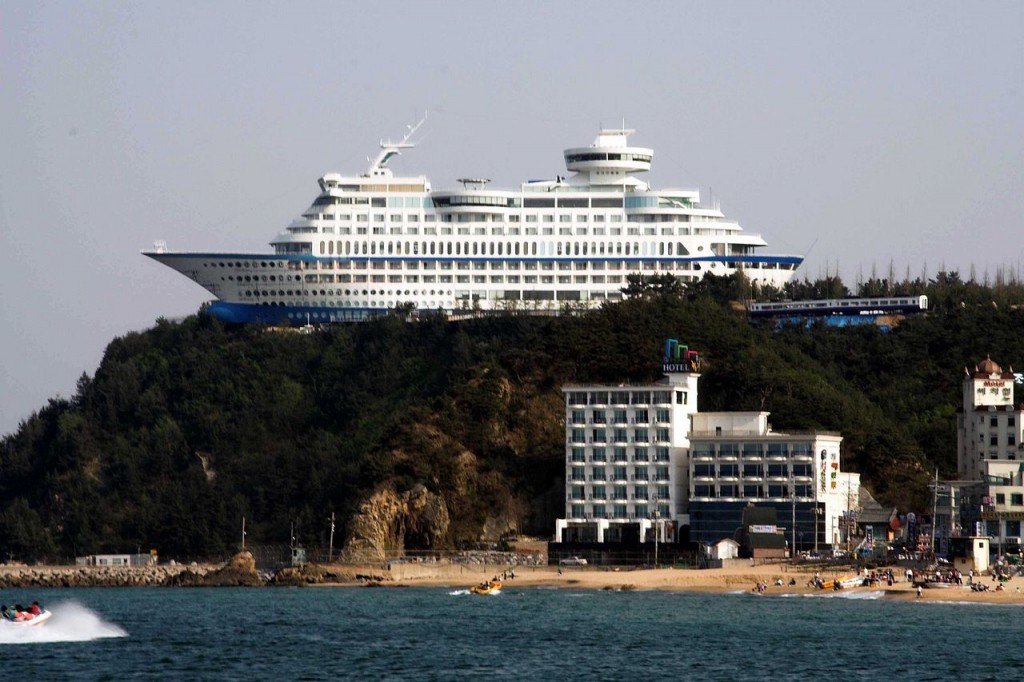 Boasting a stunning landscape of mountains and beaches, and brimming with hot springs and seafood, South Korea’s second-largest city is a boisterous coastal city that most consider a must-visit on any trip to the peninsula. Spend an afternoon checking out the murals and sculptures in the colorful hillside of Gamcheon Culture Village or take in the tranquil beauty of Haedong Yonggung Temple, one of Korea’s only oceanside Buddhist temples. Foodies will love the culinary scene, which is an eclectic mix of casual tent bars, chaotic fish markets, trendy cafés, and fine dining establishments. Finally, catch the sunset at Haeundae Beach, a beautiful stretch of white sand that offers great views of Busan’s unique urban landscape. 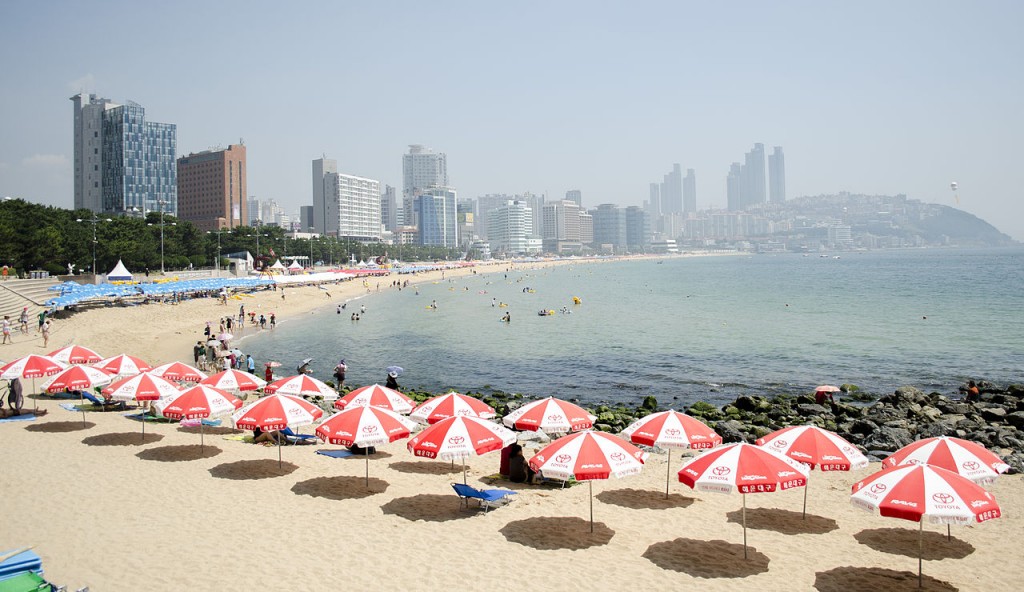 Located in South Jeolla Province, Jindo Island is a bit off the beaten path, but still has plenty to offer. Explore Dadohae National Marine Park, which consists of more than 1,700 islands and islets, some of which are inhabited by small fishing communities. Or, brush up on your Korean history at one of the city’s many cultural relics. Admire the larger-than-life bronze statue of celebrated Admiral Lee Sun-shin on the Great Jindo Bridge near the very site where he won a decisive battle against the numerically superior invading forces of Japan in the 16th century.

Perhaps Jindo’s biggest draw is its Miracle Sea Road Festival, which celebrates a natural phenomenon that takes place once a year. Visitors can watch as the sea mysteriously parts, and can walk along the culminating 2.8-kilometer-long road from the main island to a smaller nearby island. The occurrence, as magical as it seems, is due to the difference between high and low tides. 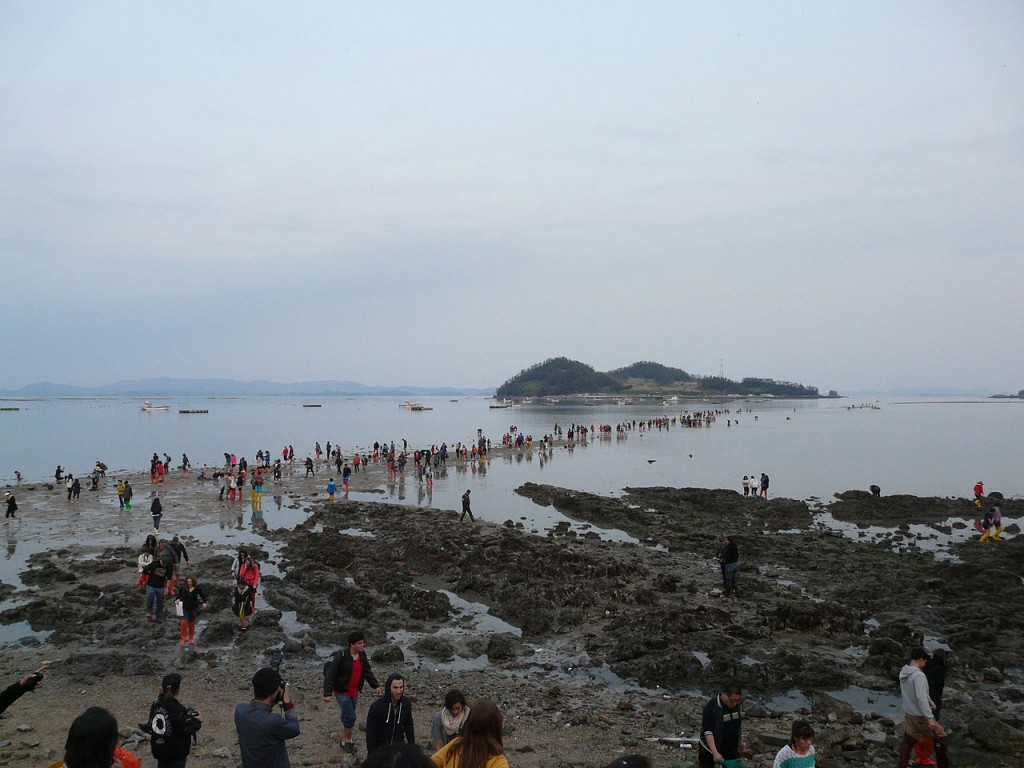 Suncheon Bay and its surrounding area is a natural ecosystem that has remained almost completely untouched. As a habitat for local plant life, a variety of sea creatures and migratory birds, Suncheon Bay has been globally recognized for its ecological value, and is often referred to as the ecological capital of Korea. To see the highlights of the city, take the Suncheon City Tour, which includes stops at Suncheon Bay’s wetlands and reed fields, as well as Seonamsa and Songgwangsa, two century-old temples. Other attractions on the journey include Naganeupseong, a village of thatched roof houses that date back to the Joseon Dynasty, and an open set where a number of popular Korean movies and dramas have been filmed. 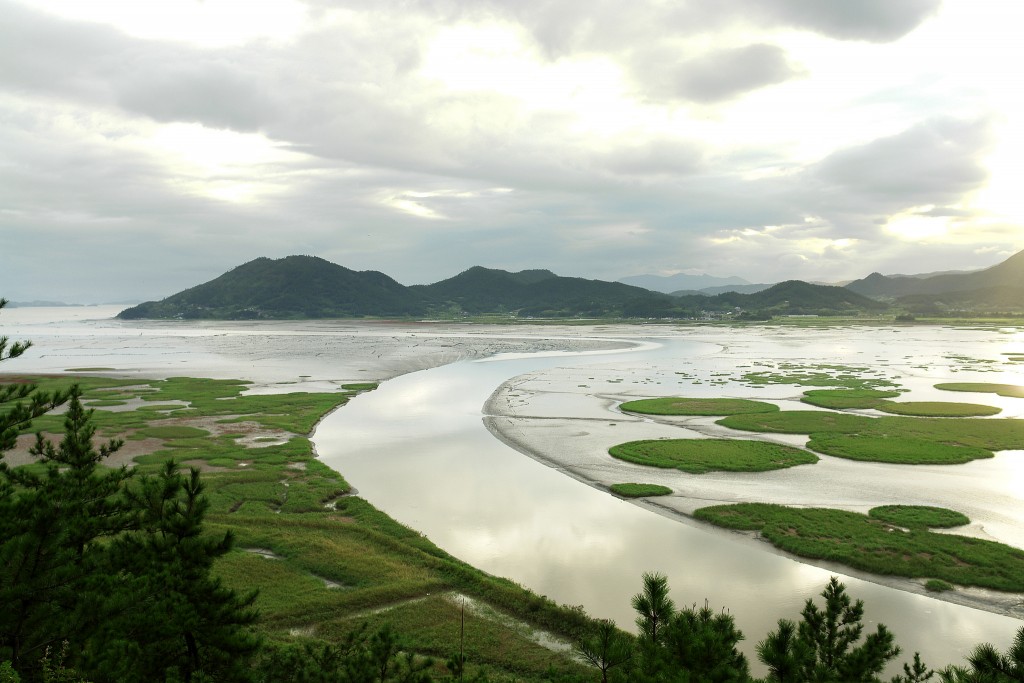 Those seeking some tranquility should head to Tongyeong, a seaside town situated on the southern coast of Korea. Here, evergreen trees and emerald seas are canopied by clear blue skies, creating a spectacular sight. Enchanting islands dot its shores, and they can be reached by ferry services that depart from the central terminal. Any island-hopping excursion should include a stop at Somaemul Island. Quiet and peaceful, the small island boasts hiking trails with varying difficulty levels, all offering incredibly magnificent views. Hungry? Tongyeong is home to countless restaurants that serve up local specialties including sea squirt bibimbap, grilled fish, and spicy hairtail stew – all served with sides of local produce and fresh seafood. 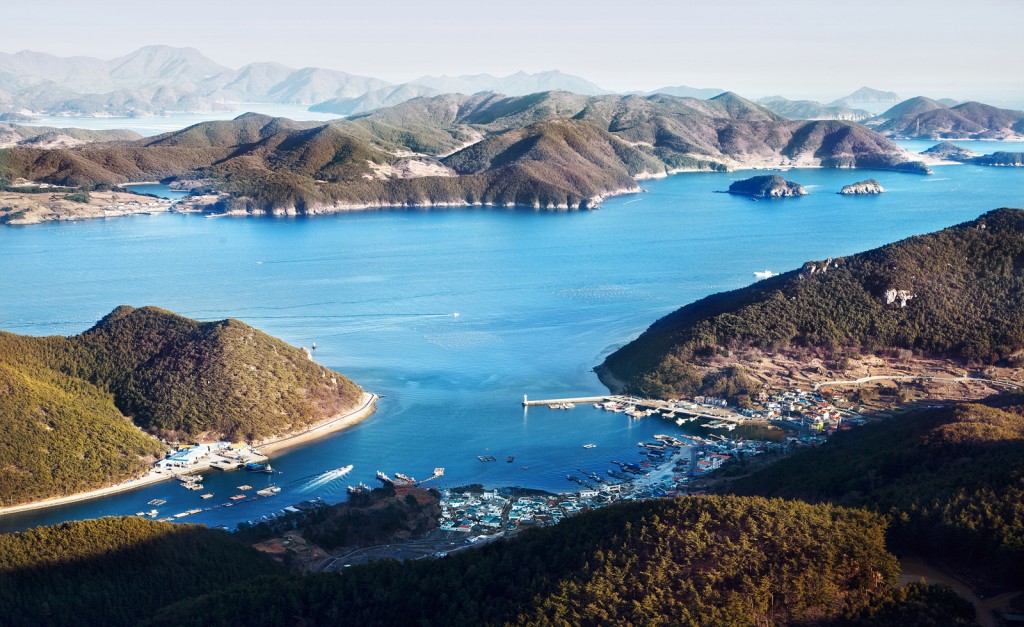 Dubbed the “Blue City,” Geoje is not so much a city as it is an island – Korea’s second largest after Jeju – of villages and settlements that are dotted around the coastline. There’s no better way to see the sights than by renting a motorcycle and zipping around from beach to beach. Don’t miss the chance to hike Daegum Mountain, which offers breathtaking island views, especially in spring, when the azaleas are in full bloom. Of course, no visit to Geoje would be complete without a visit to nearby Oedo Island, a botanical garden so beautiful that it has been nicknamed “the paradise of Korea.” 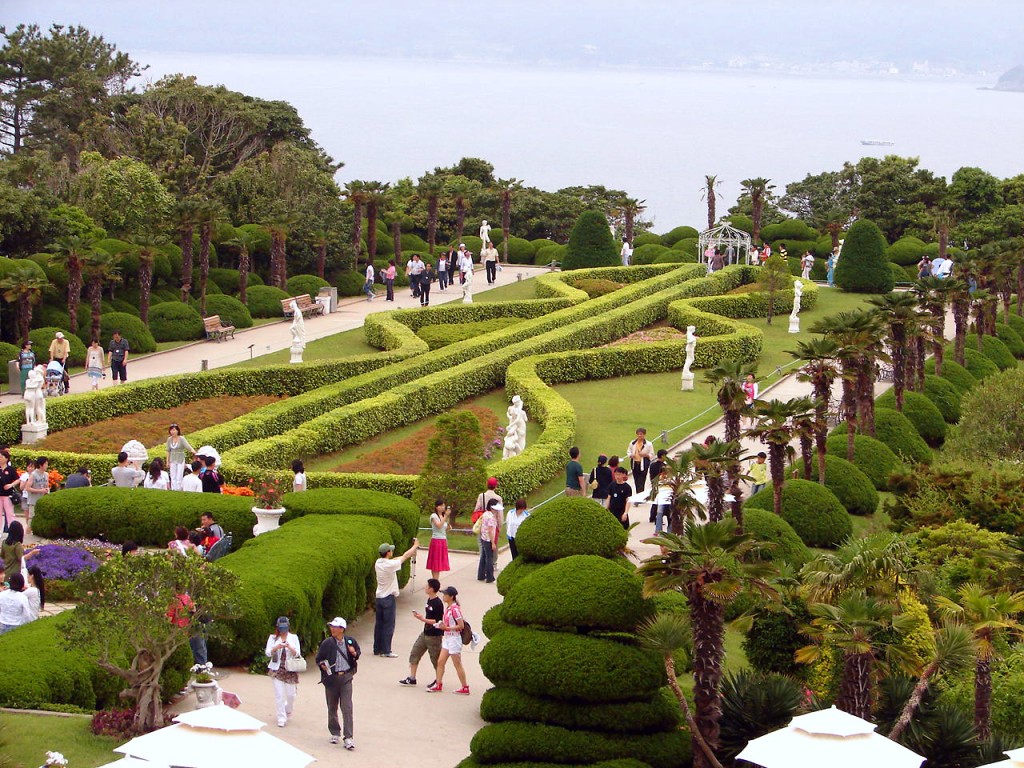 Jeju Island’s second-largest city is beautifully nestled on a rocky volcanic coastline dotted with lush parks, a deep gorge and two waterfalls. Its clear blue waters and mild ocean temperatures make Seogwipo one of Korea’s top diving destinations. Furthermore, its scenic landscapes are well suited for hiking. Trekking the Olle-gil is a fantastic way to experience the natural and cultural beauty of Jeju. There are more than 20 of them, with four passing through Seogwipo. Each route offers something different, whether it be small villages, beaches, farms or forests, providing visitors with a unique perspective of the island. Typically, the trails are fairly easy to traverse, but there are several points that do get steep and require some athletic ability. 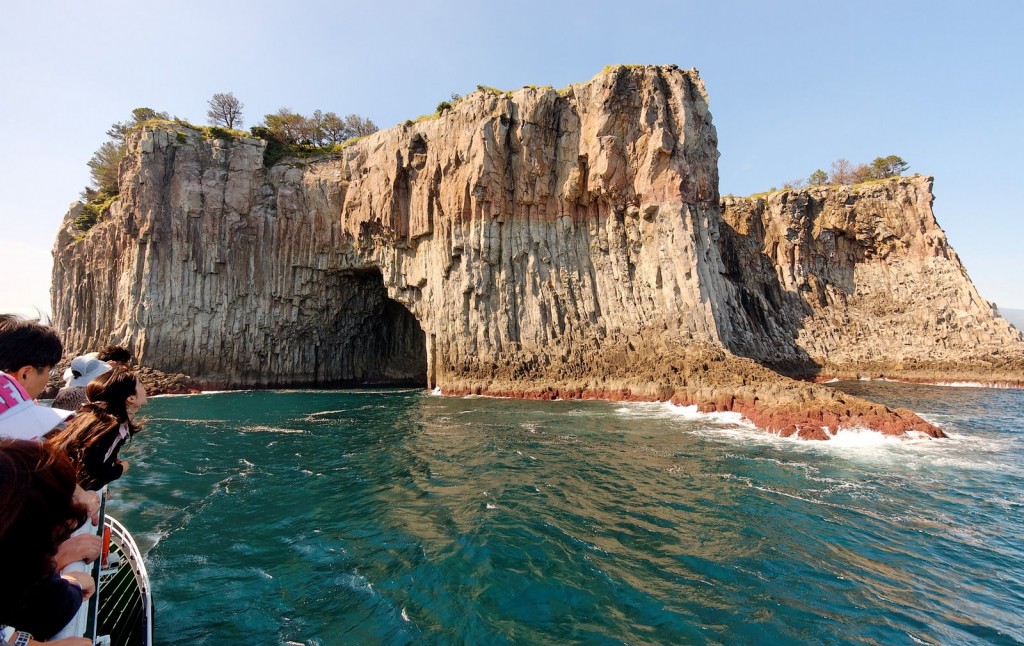 Approaching Beomseom Island, on a boat trip out of Seogwipo | © Alex Brown / Flickr