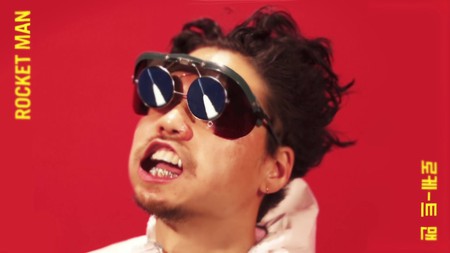 In July 2016, Korean-American hip-hop artist Dumbfoundead released the song “Banned in the Motherland.” “Reached all my limits and ignored the warnings / It’s safe to say I won’t get Samsung endorsements,” he raps in the first verse. A year and a half later, he’s taken his first step to fulfilling his own prophecy.

Dumbfoundead, government name Jonathan Park, released his new EP titled Rocket Man earlier in December, and while it would be expected that music video for the title track would be blacklisted in North Korea, considering its use of President Donald Trump’s mockery of the nation’s leader Kim Jong-Un, South Korea banned the video on the day of its global release.

As Dumbfoundead explained in the video’s press release, musicians in Korea must submit their videos to the Censorship Bureau one week in advance. And while most things are approved, “Rocket Man” was denied.

“I don’t feel like there’s much freedom of speech in South Korea,” Dumbfoundead told Pigeons & Planes. “You’ve got be careful about everything you say. It’s very nationalistic. As soon as you criticize the country or government in any way, you can get in trouble. There’s also a mandatory 2-year military service for men before you’re 27 years old. If you criticize that or you don’t fulfill that duty, you could be banned from the country.”

Watch the music video below:

While the song’s chorus repeats “Rocket Man” numerous times, there’s a clip of President Trump’s inflammatory comments in the middle of the track, and Dumbfoundead calls out Kim Jong-Un’s “daddy issues,” the song’s lyrics and its accompanying video are essentially apolitical, at least in regards to the subject. “I was pretty confused by the ban, I really didn’t think people would know about the ‘Rocket Man’ reference, or care about it,” he said.

Interestingly enough, Dumbfoundead actually filmed the video during a visit to South Korea and it happened to coincide with President Trump’s stop in the country in November, and it revealed some unexpected insights into some Korean peoples’ views on the U.S. president.

“When I was over there, I got the impression that some people in South Korea are for Trump, because he’s so aggressive to North Korea,” he said. “I saw some of the craziest signs that people were holding… the craziest said ‘President Trump, go after North Korea. We are not afraid to die.’ ”

However, the Censorship Bureau stated it was the artist’s aggressive consumption of soju—there’s one scene where he knocks back four shots in a row—and not the politics that flagged the video. Dumbfoundead isn’t buying the Bureau’s claims—or as he put it, “that’s bullshit”—but he doesn’t hate the results either.

“I don’t know what the deal is,” he said. “Some of the past music videos that have been banned by other musicians had very specific references to weed or the government. Either way, I never got a good answer on why. But it’s kind of tight to be able to push those boundaries with my music.”