Seaweed Dishes You Should Try in Korea 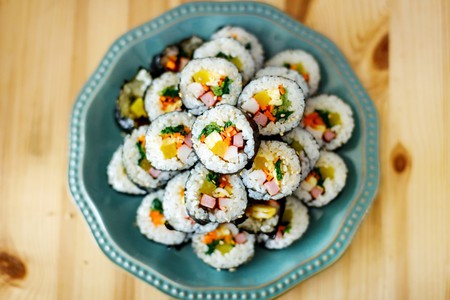 Seaweed is big business in South Korea — so big that its seaweed farms can be seen from outer space. Go to any traditional market, and you’ll see seaweed piled high and sold by the kilo by ajummas. In a variety of different forms, seaweed is one of the fundamental cornerstones of Korean cuisine. So why is seaweed so important, and how can you eat it? Here’s our guide to the plant widely touted as a wonder food, and the three dishes you can’t miss in Korea.

Why is seaweed so good for you?

Seaweed has a number of health benefits, which is one of the reasons it’s recently become so beloved by Western nutritionists. It contains high levels of calcium, iodine, iron, and vitamins including A, B6 and B12. It also contains protein, making it a perfect source of nutrition for plant-based diets (many vegans take B12 supplements, as this vitamin is hard to find from non-animal sources). Added to this, it’s very low-calorie — a snack pack of Korean dried seaweed contains approximately 66 calories, most of which is from added oil. Its umami flavour promotes a feeling of fullness, which can help regulate your overall food intake. A 2015 study led by researchers from Denmark advocated eating seaweed every day. 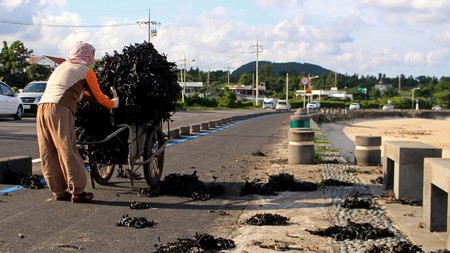 Why is seaweed so important in Korean food?

Although Korea is now a prosperous country, it wasn’t always this way. During times of hardship, seaweed was a readily available, cheap source of nutrition that could be harvested all along the Korean coastline. In the modern day, seaweed remains important for its health benefits — generally, Koreans are hyper-aware of their diet —and its place in Korean culture and traditions, such as the birthday tradition of eating seaweed soup.

The seaweed dishes you have to try

Seaweed can be found in many, many Korean dishes — it’s in side dishes (banchan), sprinkled over bibimbap, added to soup, chopped up and fried in tempura-style street snacks, and used as an ingredient in more dishes than you can shake a stick at. There are three seaweed-based foods, however, where seaweed is the star of the show; these are ubiquitous and inexpensive, and are an excellent introduction to seaweed-based cuisine.

Gim is made from thin sheets of dried laver, roasted and seasoned with oil and salt. It’s available in every convenience store in the country, and is an ultra-popular snack food. You can eat the crispy, moreish rectangles on their own, or use them as a topping on a dish such as instant noodles. 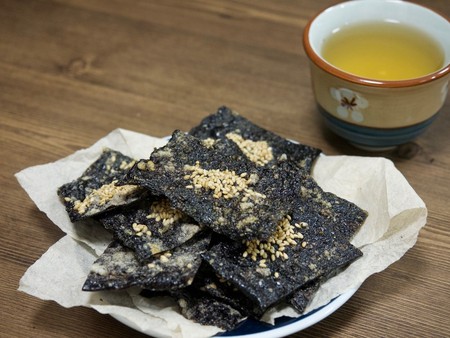 Where Europe has the sandwich, Korea has gimbap. Larger sheets of gim are filled with seasoned rice and fillings such as fish, bulgogi or vegetables, then rolled tightly and sliced to make tasty, bite-sized cylinders held together by the seaweed. You can buy gimbap in almost any market (sometimes you can choose your own fillings and have it made for you), or in convenience stores. In convenience stores, gimbap may be cylindrical or triangular. 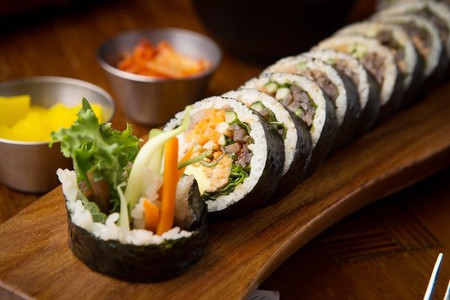 Miyeokguk is a seaweed soup that occupies a special place in Korean culture. On birthdays, people often ask if you’ve eaten this soup yet — it’s normally eaten on the morning of a birthday, and once eaten, means that the person whose birthday it is has successfully aged a year. Women eat miyeokguk immediately after giving birth, as the iodine and calcium in which it is rich are seen as important nutrients for nursing mothers. The soup is additionally a common food throughout the year, served with rice — the only time you shouldn’t eat it is immediately before an exam, as the slipperiness of the seaweed is believed to cause facts to ‘slip’ out of your brain! 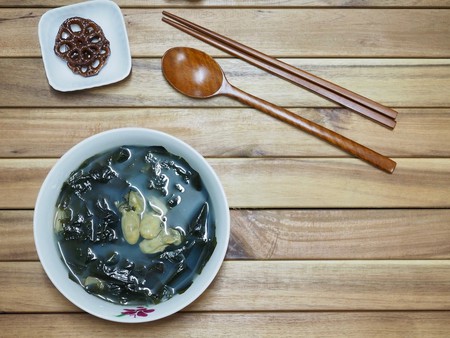