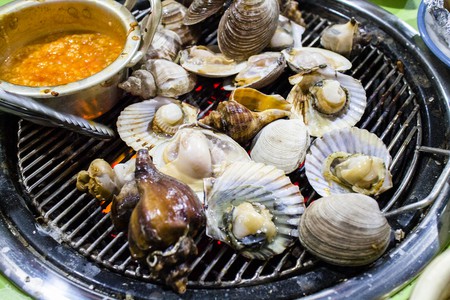 Surrounded by water on three sides, the Korean peninsula is famous for its seafood. From simple recipes like fish stew and grilled shellfish to bizarre dishes such as live octopus and fermented skate, there’s plenty to please the seafood-loving gastronome. Grab your chopsticks, and get ready to dig in!

Sometimes referred to as “the beef of the sea,” braised angler fish is the focus of agujjim, and is served on a bed of dropwort and bean sprouts. The ingredients make for a dish that is at once tart and savory, as well as soft and crunchy. Can’t handle heat? You might want to stay away, as its sauce of chili powder, chili paste and chili peppers – whew, that’s a lot of chili – packs a potent punch.

This tasty stew takes its name from its central ingredient, freshwater mudfish (chueo). Once boiled and smashed, the fish is cooked with a variety of vegetables such as mung bean sprouts, dried radish greens, sweet potato stems and cabbage. While the flavors of the stew are particularly satisfying, its unique texture is what really differentiates it from other seafood soups. 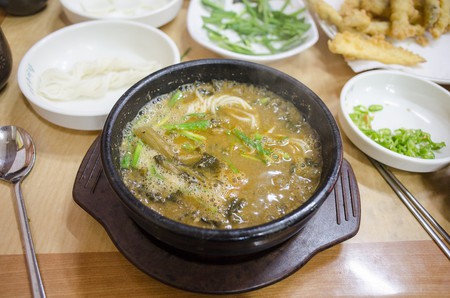 Perhaps one of the strangest seafood dishes on this list, gaebul (aka “the penis fish”) is a species of sea worm that – you guessed it – looks like a certain part of the male anatomy. Often consumed as an aphrodisiac for men, it is known to spurt out a stream of salty water when bitten into.

A favorite of Koreans, ganjang gejang, or soy sauce crab, is prepared by marinating fresh, raw crabs in a concoction of soy sauce and vinegar for around three days. Served cold, often as a side dish, the crab’s sharp pungency is so addictive that it is sometimes called “rice thief” in Korean, referring to the fact that diners will often eat more rice just so they can be served more gejang. Do as the locals do and add rice to the crab shell, mix it with the meat and sauce, and bon appétit! 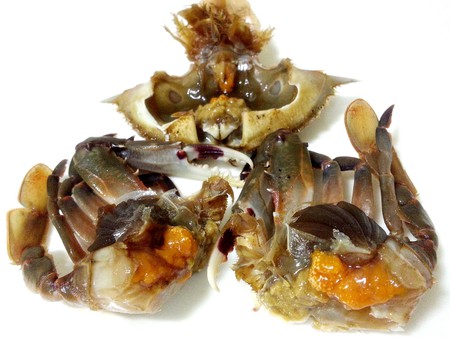 Grilled to perfection, salted mackerel can be savored on its own or added to rice. In addition to being delicious, it’s also a great source of omega 3 fatty acids, protein, vitamins, and minerals. This, along with its affordability, make it one of the most common seafood dishes in South Korea.

Crunchy and filling, Korea’s savory pancake tastes best when served brimming with shellfish, cuttlefish, and other kinds of seafood. This variety of the popular dish is called haemul (seafood) pajeon, and while it’s delectable anytime, Koreans often enjoy it with makgeolli, a fizzy rice wine, on rainy days. 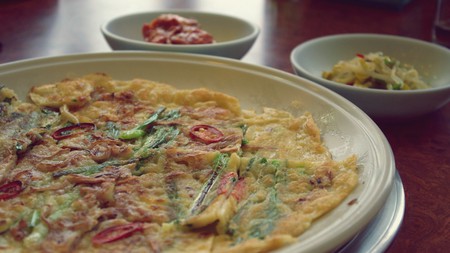 Feeling adventurous? Dig into a plate of hongeo, or fermented skate. Skate don’t urinate like other fish, but instead pass uric acid through their skin. When the fish is fermented, the uric acid breaks down into a compound that gives off the strong scent of ammonia. Despite its rather rancid odor, hongeo is packed with collagen, which helps gives the skin that gorgeous K-beauty glow.

Along with jjajangmyeong (black bean noodles), jjambbong, seafood noodle soup, makes up the core of Korean home delivery cuisine. Vegetables and various types of seafood ranging from squid to mussels are served on a bed of chewy noodles in a spicy, flavorful broth. It’s Korean Chinese food at its finest.

One dining experience not to be missed when visiting one of Korea’s coastal towns is chowing down on jogae gui, or grilled shellfish, at a seaside restaurant. The sight of ajumma (middle-aged women) delivering just-caught seafood to your table, the sound of clinking soju glasses, and the fragrance of shellfish being slowly grilled slowly over an open flame culminate in a truly fantastic meal. 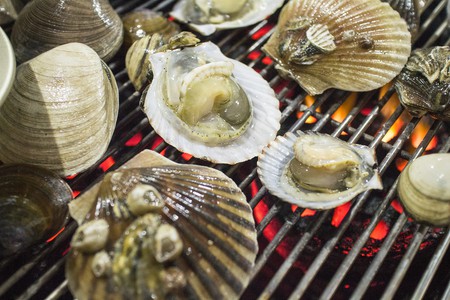 Even the pickiest of eaters cannot help but fall in love with kalguksu, hand-cut noodle soup. Simple but flavorful, this tasty Korean dish is especially good when overflowing with bajirak, or clams. The savory-salty broth is so good that you might find yourself drinking it straight from the bowl.

Enjoyed throughout all regions of the country, nakji bokkeum is a Korean culinary classic. Octopus is stir-fried with vegetables in a sauce of chili paste, chili powder, green peppers, and chili peppers – ingredients that are each spicy on their own but collectively equate to a seriously fiery dish. When prepared correctly, the chewy octopus is smothered in a thick, dark red sauce so delicious that you’ll forget the pain you’re in from eating it.

Consumed as either a snack on the go, a light meal, or a side dish for drinking, skewered fishcakes are a street food that can be found on just about any corner of the country. Popular since the days of the Japanese occupation, the spongy delicacy is tasty, filling, and easy on the wallet. 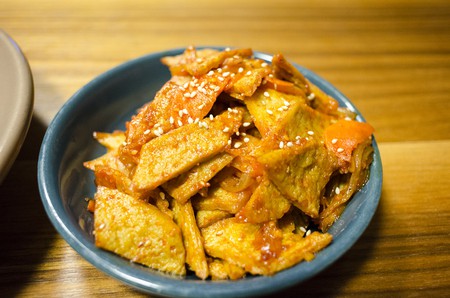 Made famous worldwide by Park Chan-wook’s film Oldboy, sannakji, or live octopus, consists of chopped-up tentacles (that squirm around as you eat them) that are served with a selection of dipping sauces. Sannakji is not the easiest dish to eat – those suckers tend to stick to the plate – but makes for a highly memorable culinary experience.