Robots Are Coming To An Airport Near You 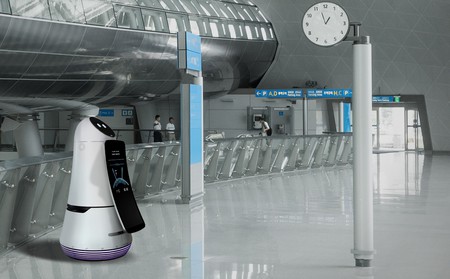 Next time you land at an airport you might be greeted by the smiling face of a robot, thanks to LG’s new lineup of robotic assistants for travelers.

LG’s Airport Guide Robot wheeled itself onto the stage at CES 2017 today in Las Vegas. Standing nearly as tall as a person, the guide looked slightly menacing as it emerged from a dramatic wall of smoke and glided towards the audience. But far from declaring an end to the human race, the robot instead offered assistance to future travelers.

The airport guide will be introduced first to Seoul’s Incheon International Airport, and will aid passengers in four languages: English, Chinese, Japanese, and Korean. The robot can scan a passenger’s ticket and provide information on boarding times, gate numbers, directions, and the weather conditions at their destination. Travelers without a fear of the robot apocalypse can also be escorted to their gate by the (presumably) friendly android.

LG also unveiled a robot to do the airport’s dirty work. The Airport Cleaning Robot, an industrial-sized robot vacuum, is able to clean multiple surfaces with different brushes and has sensors and cameras to ensure it doesn’t run over an unwitting traveler. The robot also uses localization and mapping technology to ensure it is always aware of its location.

The two robots were part of LG’s larger collection, which includes home hub robots and lawn cutting robots. “To build upon LG’s early consumer success with the HOM-BOT robot vacuum cleaner, the company has expanded upon its innovations in smart technology and robotics to unveil the most dramatic lineup of robots yet,” said David VanderWaal, vice president of marketing for LG Electronics USA. “Each robot prioritizes consumer experience and convenience at forefront, both inside and outside the home.”