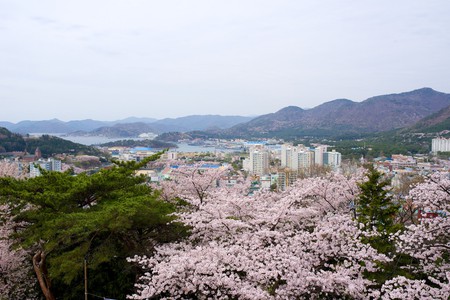 Jinhae, a cozy, seaside town snuggled in the southwest corner of Korea’s Gyeongsang province, hosts the queen of all cherry blossom festivals: the Jinhae Gunhangje Festival. Each year, around the first week of April, Jinhae is blanketed in the pink petals, and the hundreds of thousands of visitors that come to stroll among them.

While this is a must-see during Korea’s spring months, the problem with planning a whole trip around the blossoms is that they can be pretty illusive. It’s mother nature, and the blossoms come as they please and leave just as quickly. If you’re stuck scrambling last minute to catch the famous blossom festival, here are some tips on how to get there, must-sees and must-eats.

Kobus is Korea’s premier site for booking bus seats online. Even if you’ve waited until the last week, most international visitors don’t know about Kobus, so seats will still be free. This is especially true if you head to Jinhae’s neighboring cities of Masan or Changwon. From Masan, buses run non-stop to Jinhae town center, and aren’t that crowded. While unfortunately you need a Korean credit card to buy online tickets, you can check the website for seat availability at any time. Head to the station a few hours early to snag a seat.

Korea Train eXpress (KTX) has a train from cities all over Korea that goes to cities nearby Jinhae – Masan and Changwon. While KTX train tickets are a little pricer, about an hour is cut off the trip. The best part? Unlike like Kobus, anyone can book KTX tickets online. Here’s a little secret: buy a standing room ticket if all the seats are booked. You may end up standing for a bit of the ride, but if someone doesn’t show up or gets off early, that seat’s yours! And these spots rarely sell out, even last minute. From the train station to Jinhae, you can either take a taxi, starting at about KRW15,000 (US$13) or the city buses (Jinhae ↔ Changwon: 150, 751, 752; Jinhae ↔ Masan: 160, 162, 760) at about 1,500 won (US$1). Sound complicated? No sweat. The city buses are fairly easy to navigate if you’ve got Google Maps, the right bus number and some common sense.

If you’re feeling swanky, take a flight into Gimhae Airport and snag a city bus two hours over to Jinhae. This is the priciest option, but it’ll do the trip in record time. Any Korean Air flight will do.

Located in the heart of Jinhae, this iconic blossom-lined stream is the stuff fairytales are made of. While the small boardwalk and bridges over the stream get pretty crowded, the foot traffic is always moving and there’s plenty of space to walk on the parallel streets. So, whip out those selfie sticks, because the stream of love is the prime spot. And make sure to wander back here at night to experience the stream in all of it’s lit-up glory. 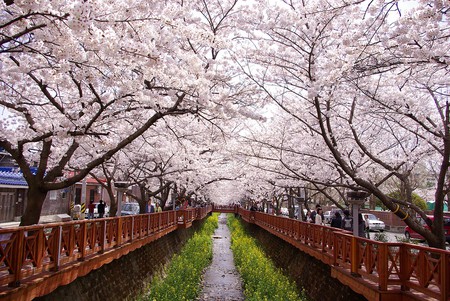 The small station, no longer in service, is the crowning joy of the festival. The KoRail train stands stationary in a picturesque tunnel of cherry blossoms. Because it’s farther away from the city, the blossom trees out here are older and much larger. Grab a snack and head over to one of the stages to sway under a canopy of pink blossoms to the sweet music of the busking musicians. 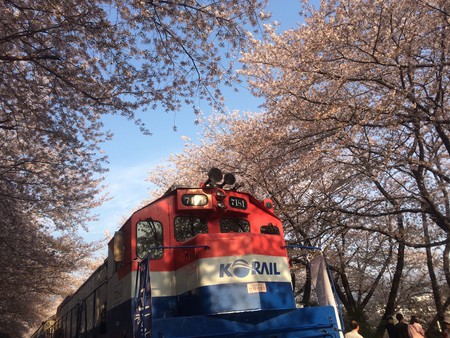 If you’re feeling adventurous, put on your walking shoes, skip the taxi fare and trek the abandoned train track to the Gyeonghwa train station recommended above. This track, fairly unknown (or not braved) by tourists, sits raised above the city. While you hop along the track, take a few moments every now and then to take in the views of the water and cherry blossom-dotted mountains. Breathe in the quiet sea air, and soak up the space away from the crowds. 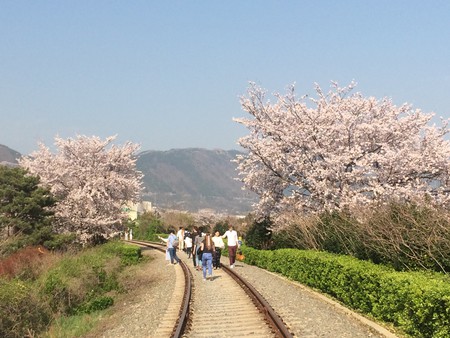 The Korea Naval Academy and Naval Base

Jinhae Gunhangje also couples as a naval festival, taking place in the sites which make this port city thrive. Usually restricted to the public, the Naval Base and Academy are accessible during the time of the Jinhae Gunhangje Festival. Don’t miss the life-size model of the turtle ship designed by Admiral Yi or the Korean War-era Gangwon war ship. 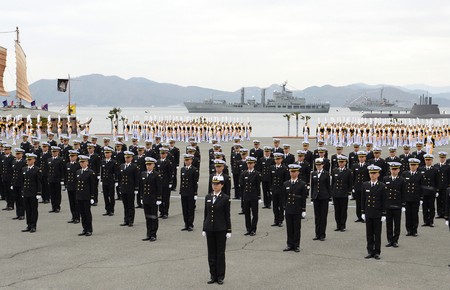 No matter if you’re there during the last days of the festival or days before, there is no shortage of food vendors lining the blossoming streets. While these guys do dish up traditional foods such as chicken skewers, fish cakes and tteokbokki, you’ll also find the street eats that make this festival famous.

Not far off from the blossom burger McDonald’s made for Japan, this little guy sports a pink, blossom-flavored bun and blossom-scented mayonnaise. Find them at GS25 along Jungwon Rotary.

While sweeter than your typical mojito, this refreshing drink still boasts a bit of tang. Topped with a blossom garnish, and pumped with cherry blossom extract, it’s got the perfect pink hue.

While not all versions come blossom-decorated, cherry blossom ice cream is a festival must, no matter the presentation. Make sure to pick up the sweet treat; it’s as pink as the trees it’s based on.

These spiral-cut potatoes are deep fried to golden perfection and held together with a skewer. Try out the onion, cheese, or honey flavors, and keep a lookout for the ones with the giant hot dog twirled inside.

As if deep-fried hot dogs weren’t enough, South Koreans also cover them in crinkle-cut fries and douse them with ketchup to make tokkebi.

If your sweet tooth is feeling a little adventurous try out Korea’s traditional egg bread. This fluffy little snack is served warm with a boiled egg baked on top.

While these unique cones may conjure up some crude images, don’t knock it ’til you try it. The famous ice cream canes can be found in troves across the festival and are filled to the brim with sweet soft serve.