The Top 10 Korean Dishes You Need To Try

To the uninitiated, Korean cuisine can appear intimidatingly complex. With bold flavors, innumerable side dishes, and detailed table etiquette, exploring Korean cuisine is surely a cultural adventure. Korean dishes balance fresh flavors of meat and vegetables, along with the sweet spice of chilli paste. However, there is more to Korean cuisine than meat, veggies, rice, and spice. Here, you can find a top 10 list of distinctly Korean dishes – from pungent Kimchi to refreshing bingsu. 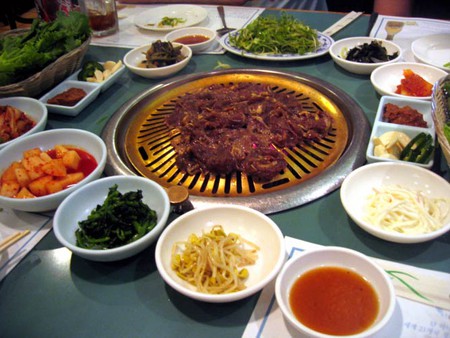 If you make a visit to South Korea, Korean Barbeque is a must have experience. Take a seat at a table with the charcoal burner fired up in the center, and order galbi (beef or pork short ribs), bulgolgi (shaved tenderloin), or samgyeobsal (literally ‘three layers’ of pork belly) by the serving. You’ll also be surrounded by an overwhelming number of side dishes in individual bowls. Each restaurant will have its signature dishes of kimchi, onions, salad, octopus, fish, corn, and soup. The process of cooking and eating can be overwhelming for first-timers, so it wouldn’t hurt to read up about Korean barbecue traditions and etiquette before heading out to the restaurant. But if you are worried about making a major faux paus, rest assured, the Korean staff will be happy to help if you are confused. If you would like to top off your feast in the typical Korean style – order a bottle or two of soju as well, and enjoy the bite of the crisp, intoxicating rice liquor that epitomizes the Korean drinking scene. Korean barbeque is a fun cultural experience, so make sure you give it a try when you visit South Korea. 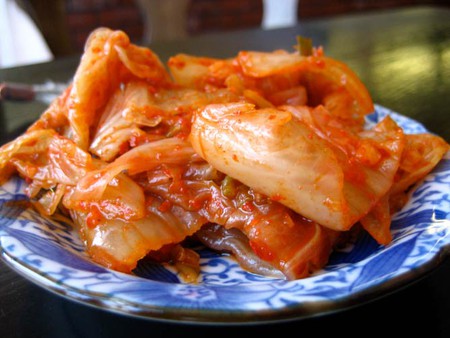 Any list of Korean food without kimchi near the top would be seriously incomplete. Kimchi is a fermented, spicy, and sour dish made with cabbage, radishes, or cucumbers. Beloved by Koreans for its health-properties and pungent taste, kimchi is also popular among Westerners, although some view it as an acquired taste. To this day, kimchi is made by each family during Gimjang, a month devoted to the (somewhat laborious) preparation of kimchi before the start of winter. There are many varieties of kimchi, and it is likely that during your stay in Korea you will discover a range of spice, sour, crisp, or bite in the kimchi you try in restaurants, temples, or homes. Even during a short stay in Korea, you might find that Kimchi has found its way into each meal you eat during the day. 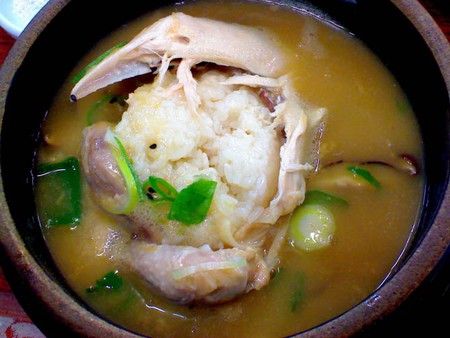 This generous chicken soup should satisfy even the hungriest of eaters, because it includes an entire chicken in the bowl. The small, usually organic chicken will typically also be complemented with ginseng, garlic, and vegetables. Although the soup is hot and steamy – perfect for fighting off a cold – it is usually eaten during the hottest days in the summer. Korean tradition states that eating a hot soup on a hot day will strengthen the immune system – perhaps by warming the body enough to fight off any future infections. Whether or not you choose to eat it on a hot day or a rainy one, this soup is comforting and delicious. 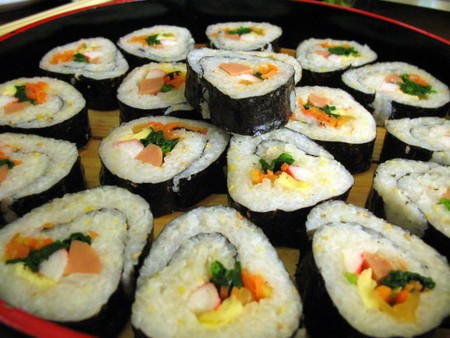 If you are feeling in the mood for a light, inexpensive snack, stop in to any kimbap restaurant- there are thousands of them. Usually lightly covered in sesame oil, the kimbap roll has a mild, sometimes crisp taste, thanks to the frequent inclusion of radish or sesame leaf. For those who don’t enjoy spicy meals, kimbap is a safe bet. For everyone else, you can enjoy an on-the-go or quick meal that will leave you feeling light and satisfied.

Jeon is a latka-like pancake that can be made with kimchi, potatoes, onions, seaweed, meat, or seafood. This meal is oily and satisfying, perfect as a bar snack. Typically, a jeon restaurant will also be serving the carbonated rice liquor, magkeolli, by the kettle. It is a great idea to sip magkeolli from a bowl as you enjoy the crispy, delicious jeon with chopsticks. Unlike the somewhat sharp taste of soju, magkeolli is mellow in taste and includes less alcohol. If you want a mellow drink with some crispy fried bar food, jeon and makgeolli are the Korean answer you need to try. 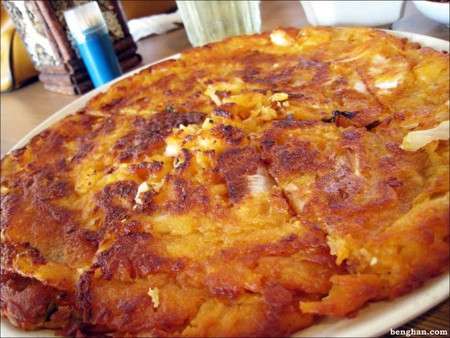 Bibimbap is a beautiful dish of rice, vegetables, meat, and egg. You can order it in a piping hot stone bowl, and mix it together with as much chili paste as you desire. The meal is prepared with distinct local flavor depending on which areas of Korea you will visit. Jeonju is well known for its local bibimbap with raw beef, and each year they hold a large bibimbap festival. The dish is balanced to bring health to all the body’s systems, and after eating it you will likely feel fresh and satisfied, not weighed down or sluggish. 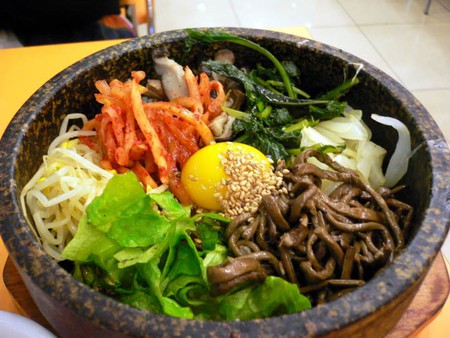 Bingsu appeals to Korea’s enormous sweet tooth. During the sweltering summers, the shaved ice treat is served in countless restaurants across the country. Usually sweetened shaved ice will be topped with fruit, syrup, granola, or green tea and sweet red bean, and sometimes ice cream is added in for good measure. Young couples or groups of friends get together to share a heaping bowl of bingsu and take selfies together on summer nights. If you try Bingsu, you’ll probably agree that it’s a fun and enjoyable experience – perhaps similar to the ice cream sundae of America. 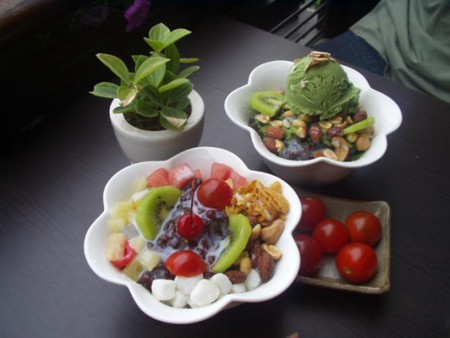 Mandu is the dumpling of Korea, and you can enjoy it steamed, fried, or in a soup. Mandu are usually filled with pork and onions and served with a soy dipping sauce. Mandu can be ordered easily at almost any Korean restaurant, and they are always a safe bet if you are unsure of other menu items. Dumplings are delicious in any country, and Korea is certainly no exception. Try them yourself to see how they stack up. 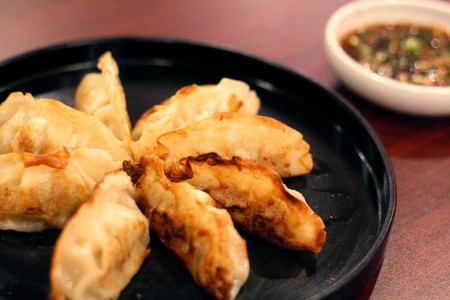 ‘Guk’ is a general category for all Korean soups. ‘Haejangguk’ is soup specifically eaten to cure a hangover. Usually, haejangguk is served with tender beef still on the bone- so you may need to be handy with your chopsticks in order to remove the pieces of meat. The beef broth and meat is complemented with onions and cabbage, and the side dishes will include plenty of kimchi. It’s great even if you aren’t feeling the after-effects of a soju night, but if you are, this meal should have you back on your feet in no time. 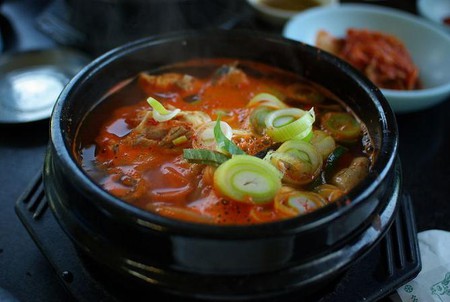 Some people may balk at the inclusion of a processed Western food on a top list of Korean cuisine, but the truth is that Spam is a ubiquitous part of Korean cooking. It is often included in kimbap, stews such as budae jjigae, and expensive Spam gift sets are given during major holidays such as Chuseok and Solnal (Lunar New Year). The pervasiveness of spam began shortly after the Korean war, when spam was introduced through the American military. Korean people adapted traditional stews and other foods to include spam, and still today it is a fondly regarded food by many Korean people. For Western people, it may be best to acknowledge the history and accept a small serving if you are willing to look past the lurid colour. 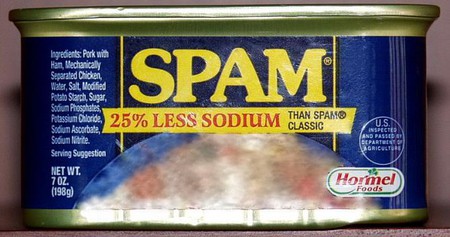