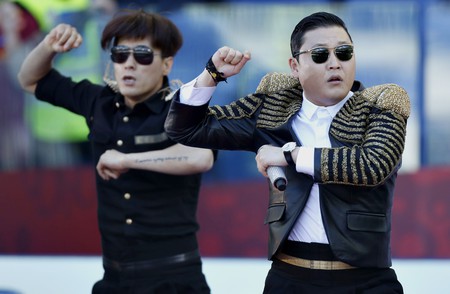 The demand for Korean language lessons is rising because of the popularity of K-Pop.

More people are taking Korean language lessons because of the growing interest in K-Pop.

The music genre, made popular worldwide by stars like Psy and BTS, has inspired fans in countries like the US, Canada, Thailand and Malaysia to start learning Korean.

According to a report by the Modern Language Association, students taking Korean at US universities rose by almost 14% between 2013 and 2016, even though overall language enrolment decreased during this time.

There are now 14,000 people learning Korean in the US – a huge increase from two decades ago when there were just 163.

“Hallyu” or “Korean Wave” refers to the the popularity of South Korean culture that first begun in the mid-1990s.

But there’s just one snag for English native speakers – it’s ranked as one of the hardest languages to learn by the Foreign Service Institute (FSI).

Ji Hyun Park, who escaped from North Korea and has since settled in Manchester, teaches English for the tutoring service Chatterbox.

She told the BBC: “Different languages are used to speak to adults and children – words like ‘hello’ and ‘goodnight’ are different depending on whether you are speaking to a child or an adult.”

Park has noticed how Korean culture has become more popular in the UK over the years.

“When Gangnam Style was popular, my son was a teenager in high school and told me that his friends were all singing it even though they didn’t understand what the words meant.”

K-Pop has become so prevalent that a UN aid agency uses it in a project that connects young refugees from the Middle East with western students via Skype as a conversation starter.

Foreign K-Pop fans are also starting to adapt the way they speak. A study of an Algerian K-Pop Facebook group, which was published in the journal Sino-US English Teaching, found most of its members had started using Korean words and phrases in normal conversation.

As demand grows around the world, the South Korean government is set to launch 130 language institutes in 50 countries.

Meanwhile, BTS, a boy band formed by Big Hit Entertainment, has become one of the few K-Pop acts to achieve international success. Earlier this year, they shot straight to number one in the US Billboard 200 chart with their third album Love Yourself: Tear – the only K-Pop band to manage this feat so far.

The band have also won top social artist for the past two years at the Billboard Music Awards, beating acts like Justin Bieber and Demi Lovato.