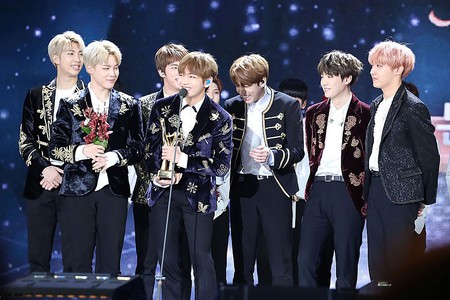 So, it’s no surprise that they’ve crafted a killer track that captures the trials and tribulations of being a millennial today on their new album Love Yourself: Her.

Yeah, it’s not all avocado on toast, Instagram stories and non-stop partying, you know.

Band member Suga explained the meaning behind ‘Go Go’: ‘The current generation uses phrases like YOLO and having fun squandering money, but I don’t think people think about why they use such terms so much even while using the terms.’

You might also be interested in: An A-Z Guide of Everything You Need to Know About K-Pop Band BTS

He added: ‘We tried to interpret [this phenomenon] through BTS’s unique perspective.’

Suga’s bandmate Rap Monster also had a few words to say about the track to Billboard and claimed it revealed just how tough it was to be young in this day and age.

He said: ‘It’s about how our young generation are living their lives with low expectations and standards so people are upset with reality; they have little hope and there’s so much economic hardship. We wanted to say something about it and emphasise to the world that it’s not their choice, but brutal reality that forces people to live and spend as if there’s no future.

‘In Korea, YOLO has become a big key word for young people because we don’t have money and it’s really hard to get a chance to earn a lot of money. I think society has a lot of problems for young people. Young people spend their money on claw crane machines at arcades and they spend like $30 on trying to win these dolls. And then it’s like, “Oh! I spent all my money…shit. But I don’t regret.”’

‘That’s the biggest luxury for Korea’s young people: collecting accessories, cosmetics, that’s what they think is a luxury. It’s YOLO because it’s like, “I’m gonna buy all this! I’m gonna buy all this food and I’m going to eat it! I’m going to do it!” I think it’s sad because it’s all we can. ‘Go Go’ is just saying, “Okay, just do it, we won’t regret it. Just spend several bucks on the machine and eat the food!”’

The band have become the first ever K-pop act to break into the top 10 of the Billboard 200 with Love Yourself: Her.

The album, which was released on September 18, debuted at No 7 – the highest ranking ever for an Asian act on the chart.