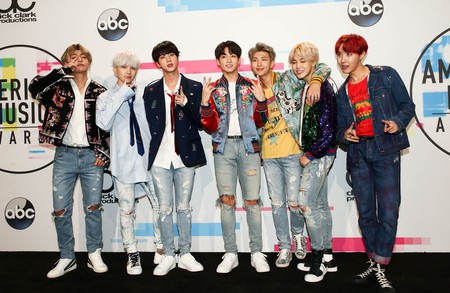 K-pop boy band BTS continue on their quest for world domination after breaking two new records in the space of one week.

South Korean boy band BTS have set a new record, beating Taylor Swift to land the most viewed music video in the first 24 hours on YouTube.

The K-pop group’s video for their new single ‘Idol’ was watched over 45 million times on the site in just one day after it was released on Friday, 31 August.

This means Jin, Suga, J-Hope, RM, Jimin, V and Jungkook have now officially overtaken the record set in 2017 by Taylor Swift, whose video for ‘Look What You Made Me Do’ got 43.2 million views in one day.

The track ‘Idol’ has since been remixed to feature US rapper Nicki Minaj, while the video for the solo version has continued to rack up views after a guerrilla fan campaign by their dedicated BTS Army.

At the time of writing, ‘Idol’ – which gives a nod to South Korea’s traditional culture in a fun and colourful way – has been viewed over 125 million times in just over a week.

The video features the boys dancing in a range of costumes, including hanboks, a traditional South Korean outfit, against vibrant and trippy CGI-generated backdrops.

Tigers, which are strongly associated with the country’s culture and its people, also pop up.

The track is a bold statement from the band, who are acclimatising to their status as one of the most popular in the world; it’s their way of affirming that, despite their growing international success, they haven’t lost any of their creativity or credibility.

From RM’s declaration at the beginning – “You can call me artist / You can call me idol” – to the the band singing “You can’t stop me lovin’ myself” in the chorus, it’s clear they’re enjoying their fame.

The song mixes Korean instruments like the gakgung (a Korean bow) with South African gqom, house music that originated in Durban, for a multicultural musical experience.

The song, which features on the album Love Yourself: Answer, is also the first K-pop single to chart in the UK, reaching No 21 in the Top 40.

Both versions of ‘Idol’ – the one with just BTS and the remix featuring Nicki Minaj – are counted together as one track, which has helped the song rank as high as it has.

Love Yourself: Answer has also shot straight to No 1 in the US Billboard chart – just a few months after Love Yourself: Tear achieved the same feat. Both LPs are part of the boy band’s Love Yourself trilogy. BTS are now the only K-pop act with two US chart-topping albums.