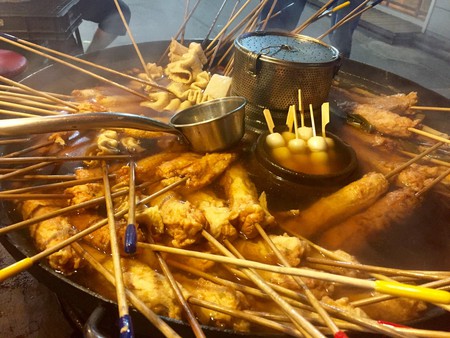 Go into the food section of any Lotte Mall in South Korea and you’ll find Samjin Fish Cake Bakery. Serving up fish cakes and croquettes of all kinds, Samjin has firmly established its place in Korea’s food culture, and is the largest fish cake producer in the country. In the seaside city of Busan, you can visit a museum devoted to Samjin’s history, learn to make your own fish cakes, and sample fresh wares in the adjacent fish cake bakery.

Fish cakes (eomuk, or 어묵 in Korean) are popular all over Korea. They’re an ubiquitous street snack that are found in a variety of dishes. Alone, they can be concertinaed onto long skewers and cooked in eomukguk, a warm broth, sliced up and used in spicy tteokbokki, or shaped into thick croquettes with a variety of different vegetables and flavourings. They’re eaten by Koreans of all ages and from all walks of life. 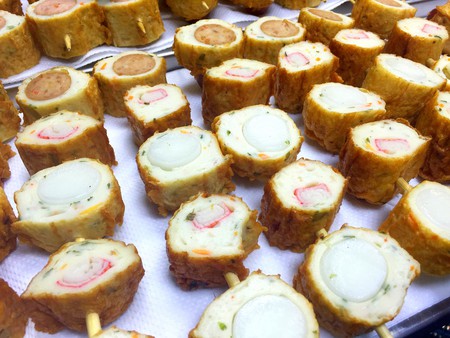 Busan, Korea’s second largest city, is famous for its fresh, tasty seafood — located on the coast, it’s home to Korea’s largest fish market and has historically relied much on marine food sources. This is one of the reasons why ‘Busan fish cake’ is shorthand all over Korea for the best, most delicious fish cakes in the country. Busan fish cakes tend to be a little thicker, and more fishy-tasting, than fishcakes made elsewhere in the country. It is in this city that you’ll find Samjin Fish Cake Bakery.

Established in 1953, Samjin is the oldest fish cake producer in Busan. It’s also one of the most famous; it has no fewer than seven outlets in the city, including the museum and a store in Busan Station, and 15 other stores across the country, including Seoul. In 2017, Samjin opened its first outlet in Singapore. The history of Samjin fish cakes therefore gives visitors an insight into the Korean fish cake industry as a whole.

To get to the museum, visitors can take buses number 11, 70, 88-1A or 101 from Nampo, and alight at Yeongdo Bongnae Market stop. It’s not far from Nampo-dong and Jagalchi Market, and is located just on the other side of Yeongdo Bridge, which connects Yeongdo Island to the mainland.

The museum is small but perfectly formed; a variety of displays take you through the history of Samjin, from its establishment by founder Park Jae-Deok to the present day. You can see the old machines originally used to process the fish cakes, photographs of Samjin’s early days, and find out about the history of fish cakes in Busan.

The original fish cake recipe was adopted by Busanites during Japanese colonisation, but fish cakes have since become an ultra-Korean food. This was driven in part by a marketing decision made by Samjin in 2013, when they began to sell their fish cakes in a more varied ‘bakery’ style, driving a changed public perception; fish cakes became not only a wildly popular street food, but a recognised delicacy of Korea. You can see this ‘bakery’ style in the layout of Samjin’s flagship store (close to the museum), where a plethora of fish cakes in a variety of styles are on display.

At the museum, you can even try your hand at making fish cakes yourself. At weekends and school holidays, a fish cake-making workshop and entrance to the museum will set you back a mere 10,000 won ($9.25/£6.95). Do note that the workshops require pre-booking on their website, which is currently available only in Korean — enlist a Korean friend to help you, or try contacting them directly.