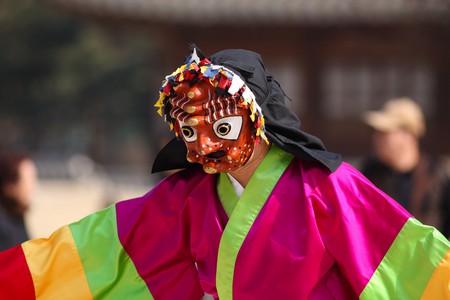 Originally celebrated as a shamanistic ritual following the annual sowing of the seeds, Dano is one of South Korea’s major traditional holidays. From eating rice cakes and partaking in wrestling matches to washing one’s hair in water boiled with sweet flag, these are a few of the traditional customs associated with the special day.

Following Seollal (Lunar New Year) and Chuseok (Mid-Autumn Festival), Dano is the smallest of South Korea’s celebrated traditional holidays and is celebrated on the fifth day of the fifth month of the lunar calendar.

Originating during the Mahan Confederacy (a confederation of Korean states that existed more than 2,000 years ago), Dano is believed to have originally been an elaborate shamanistic ritual that was performed for the sky deity in celebration of the end of sowing season.

In Jinhan (an ancient state that existed from around the first century BC to the fourth century AD), a ceremony to the gods was held following the sowing of the seeds in May. Historians believe that this practice was carried on into the Silla Dynasty (57 BC–935 AD) and became known as Dano. 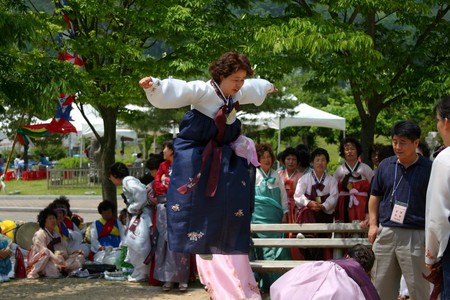 A woman participates in folk games on Dano | © Robert

Beginning during the era of the Three Kingdoms of Korea (892 – 936), the ancestral god also became a focus of sacrifice. In Gaya (43 – 532), for example, Dano was one of five annual rituals for Suro, the state’s fabled founder and king.

Although the festival was known as Surit-nal during the aforementioned times, the currently used name, Dano, derived from the Duanwu Festival, which was adopted during the Joseon Dynasty (1392 – 1910) along with the date of celebration.

Believed to be filled with positive yang energy, Dano was a lively celebration of song, dance and wine. People of all social classes went out of their way to look their best, often wearing new clothing in hues of blue and red.

Women took part in danojang, a custom in which they cut and boiled the roots of changpo, or sweet flag – a tall perennial wetland plant – and washed their hair in the boiled water to add luster to their locks. They also pinned the roots of the plant in their hair believing that the unique aroma would keep away evil spirits. Men, too, harnessed the power of the root by wearing them around their waist.

Traditional foods consumed on this special day included various kinds of tteok, or rice cakes, that were marked with a wheel pattern (Dano’s former name, Surit-nal, originates from the Korean word for wheel). Herbs wet with dew on Dano morning were also collected and consumed, as they were said to heal stomach aches and wounds. 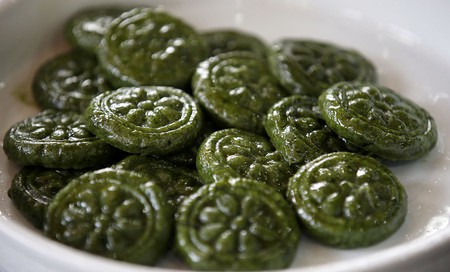 Households held special rites in which they offered up freshly picked cherries to their ancestors, and conducted ceremonies to pray for a rich harvest. One such ceremony was known as “Marriage Under the Jujube Tree,” and consisted of placing rocks between the roots of a jujube tree.

But there was also plenty of fun to be had. Townspeople took part in a variety of games. Women competed in geunetagi, competitions to see who could swing the highest. Ssireum, a type of wrestling match, was popular among men, especially because the winner was awarded a bull as a prize. 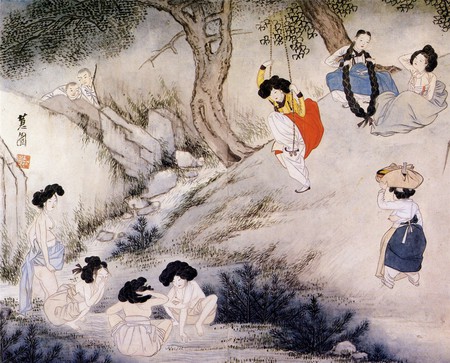 There was plenty of singing and dancing, as well. Traditional mask dances were particularly popular among the peasantry, who enjoyed the satirical lyrics that mocked the aristocracy.

The nobility, too, had their own Dano traditions. At the palaces, the Joseon royal court presented the ruling monarch with a book of Dano poetry. The king would return the gesture by presenting them with special fans crafted by artisans and gifted by the provinces as tributes.

While not as vigorously or as widely celebrated as it once was, Dano is still marked by a number of traditional festivals and events.

The largest is the Gangneung Danoje Festival in which people travel from all corners of the country to partake in festivities which include odokddegi folk performances, the Gwanno mask drama and oral narrative poetry.

Children and adults alike can also participate in washing their hair in water boiled with sweet flag and play traditional games. Listed as a UNESCO Masterpiece of the Oral and Intangible Heritage of Humanity, the festival is not only fun, but also important, as it maintains the rich traditions of the country’s past.