Here's Why Itaewon Is a Model Neighborhood for Diversity 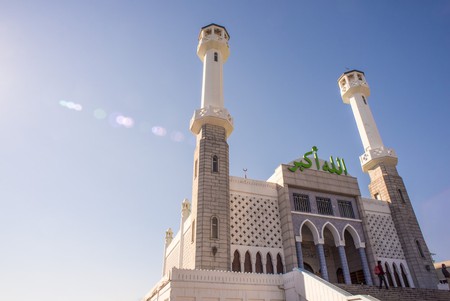 Once avoided by Korean residents due to cultural barriers, language differences, and a reputation that painted it as a seedy and crime-infested area, Itaewon has transformed into a trendy hotspot where locals and visitors alike can enjoy the freedoms that come along with cultural, religious, and sexual diversity.

A taste of cultures from around the world

From the early days of the Korean War up until fairly recently, Itaewon’s shops, clubs, and once-thriving red light district functioned as a playground for American soldiers, thanks to its close proximity to the U.S. Army Garrison Yongsan.

It wasn’t until the Seoul Olympic Games in 1988 when the exposure to external influences enabled significant changes in the characteristics of the neighborhood. Foreign restaurants began opening their doors to satisfy the rapidly growing number of foreign tourists, business people, diplomats, and other visitors who hoped to get a taste of home in Korea.

As young English teachers from North America, the United Kingdom, and Australia, as well as migrant workers from South and Southeast Asia, began to outnumber the army personnel in the Itaewon area, the food culture evolved further. Restaurants promising authentic foreign cuisine from all corners of the globe began to flourish throughout the district, as did small grocery stores that catered to migrant laborers and Muslim residents. The foreign cuisine served up at these establishments quickly became representative of Seoul’s newly developing cultural diversity.

After a number of clean-up initiatives were instituted by the Seoul government, and Itaewon restaurants began to appear on popular Korean TV shows in the mid-2010s, young Koreans began to flock to the district to experience the flavors and cultures existing beyond the borders of their country.

Today, just about every kind of world cuisine can be had in Itaewon, from Jamaican jerk and Turkish kebabs to Taiwanese gua bao and Mexican-Korean tacos.

Hello again, Poutine! You're looking mighty fine! 😍 Dinner last night was poutine from Oh! Poutine in Itaewon and it was delicious! The cheese curds are homemade (they take 6-7 hours!) and you can personalise your toppings. I went for the popular combination of sour cream, bacon and green onions, and my friend had the salsa poutine (regular poutine with salsa, sour cream, cheese sauce and green onions) with chicken tenders. All sooooo good! 🇨🇦❤ ・・・ #Repost @ hannahinternational (@get_repost) #푸틴#오푸틴#이태원#캐나다#그레이비#먹스타그램#퀘백#서울 #맥주#감자튀김#밴쿠버#토론토#poutine #ohpoutine#itaewon#seoul#korea#canada#canadian#gravy#oh_poutine

It’s also the central hub for foreign festivities, such as St. Patrick’s Day parties, massive Halloween celebrations, and football match screenings. Perhaps its most notable celebration, however, is the Itaewon Global Village Festival, which merges Korean traditions and foreign cultures through food, dance, and music.

Religion in South Korea is characterized by the fact that an absolute majority of the country’s residents (56.9% as of 2015) have no formal membership in a religious organization; among those who do practice a religion, there is a dominance of Protestantism – Seoul is home to the largest Protestant church in the world – Buddhism, and Roman Catholicism.

But a more diverse range of religious groups can be found in Itaewon, including a large Muslim population. Although the Muslim communities in Seoul are dispersed across the city, many of them frequent the Itaewon district for their worship, as it is home to the Islamic Central Masjid of Korea.

Opened in 1976, the building was the first mosque in the country, and today serves as the functional hub of the Islamic cultural community in Seoul. Noted for its characteristically Islamic design, the structure boasts large minarets and beautiful Arabic calligraphy engravings that add a unique character to the skyline of Itaewon.

Surrounding the mosque is a labyrinth of small streets and alleyways that are chock full of Halal-certified restaurants and bakeries, adding both to the gastronomic and cultural diversity of the neighborhood.

Although progress is being made, socially conservative South Korea has been slow to tolerate sexual minorities, and members of the LGBT community often feel pressured to conceal their lifestyles from their families, friends, and colleagues.

But in Itaewon, things are different. Home of what locals refer to as “Homo Hill,” a cluster of alleyways bedecked with gay bars, the neighborhood boasts a LGBT-friendly atmosphere. As the heart of Seoul’s gay nightlife scene, the neighborhood is often seen as a sanctuary in which all people can be open about their sexual orientation without having to worry about repercussions.

Perhaps the most famous name to help foster the LGBT scene in Itaewon is none other than Hong Seok-cheon, a charismatic celebrity known for being the first Korean public figure to come out. After coming out in 2000, he faced massive stigma, which led to his unfair expulsion from all his network television programs and advertisements.

It was then that he decided to open his first restaurant, My Thai, in Itaewon. Since then, his restaurant empire has grown to include ten immensely popular establishments. In addition to being a regular on the country’s most popular variety shows and launching his own ramen line, he is also credited for helping South Koreans to better understand and accept the complexities of sexuality.

As more and more foreigners begin to flock to Korea, Itaewon will certainly provide an excellent model as the once homogenous Korea becomes increasingly multicultural and diverse.