Number two among Korea’s three ‘jewel temples,’ Haeinsa is a storied sacred site that leads the visitor through symbolic gates and shrines up to its most important building, the Janggyeonggak. A major center of Hwa-eom Buddhism, it has narrowly escaped destruction many times, most recently during the Korean War. Clustered on a slope in the Gayasan mountain range, it is surrounded by tossing peaks. 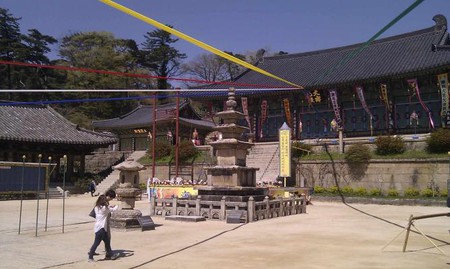 Haeinsa is Korea’s second-ranked jewel temple, coming right behind Tongdosa, which is number one because it is the biggest and represents Buddha himself. Haeinsa stands for Buddhist scripture, which Buddhists rank right behind the founder of their religion in importance; it holds this significance because it houses a UNESCO cultural relic known as the Tripitaka Koreana, which consists of thousands of wood blocks carved during the Goryeo Dynasty (918-1392) with Buddhist holy writ. Although it is located in Gyeongsangnam-do, the same province in southeastern Korea as Tongdosa, it is harder to get to; Hapcheon, the nearest city, is best reached from Daegu, capital of Gyeongsangbuk-do to the north. Although visitors can no longer peer through the wire at the Tripitaka itself, they can still see the outside of the specially designed buildings that hold the blocks, and the temple is otherwise filled with interest.

The name of this temple is officially translated as “ocean seal” because it refers to a passage in the Flower Garland Sutra about the state of deep concentration Buddha achieved in which his mind was like a perfectly placid sea reflecting things as they really are. Perhaps the transliteration “reflecting sea” would be a better rendering of its name; either way, Haeinsa is called after scripture, another association with it. In fact, this temple was also famous as a teaching center for the Flower Garland School of Buddhist philosophy (Hwa-eom in Korean), with many masters residing in it. It is located in Gayasan National Part surrounded by the peaks of the Gayasan range.

Legend has it that Haeinsa began as a small hermitage in the 7th century, but historical records exist indicating it was built as a Hwa-eom monastery in 802 by two masters named Suneung and Ijeong, who had returned from studies in China. A very old ginkgo tree on the property is said to have been planted when the temple was built. When King Taejo founded the Goryeo Dynasty in the next century, he rewarded its abbot, a Master Huirang, for helping him secure power and curing his queen of illness by expanding his monastery into a great temple and Hwa-eom learning center. Hundreds of monks came to study, and Haeinsa has flourished ever since. 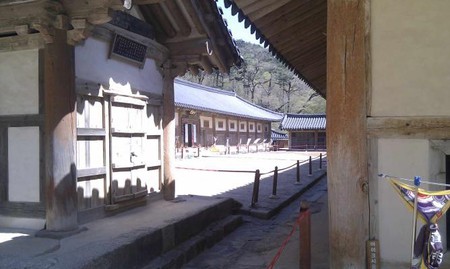 Unlike Tongdosa, whose buildings are spread out along a river, Haeinsa’s are tightly clustered on a slope and arranged on three levels. It is said that the temple’s layout resembles a sailing ship launching into a vast sea in the spirit of Mahayana Buddhism. Less dramatically, like all Korean Buddhist temples, Haeinsa is approached through a small gate called the Iljumun, which symbolizes humankind’s beginning its way to Buddhahood. The path continues uphill through the Four Heavenly Kings Gate which guards the temple and the Bullimun, or “gate of non-duality,” which represents the oneness of all things. Inside the main area of the temple, which is at a higher level than the entrance gates, are about a dozen halls. The main one, Daejeokgwangjeon, is dedicated to Vairocana Buddha, who represents the eternal truth of the precepts laid out in Buddhist scripture.

Since housing the Tripitaka Koreana is Haeinsa’s main claim to fame, this treasure deserves special attention. Its storage hall, the Janggyeonggak, which consists of two long, connected rectangular buildings at the highest level of the temple, is itself a national treasure and UNESCO World Heritage Site. The date it was built is uncertain, but it is known that it was renovated in the 1480s. The hall’s foundation consists of layers of salt, charcoal, lime and sand, which both reduce humidity that would rot the wood blocks, and keep insects away. The structure faces southwest to prevent direct sunlight that would also damage the blocks. Inside, the doors, windows and shelves for holding the blocks are all precisely angled to allow for good ventilation. Such scientific construction centuries ago is amazing, and has served to preserve the Tripitaka’s 80,000 blocks just as well as modern methods could. Unfortunately, now visitors can only look at the hall’s outside, but knowing something of how it functions helps you appreciate it more. 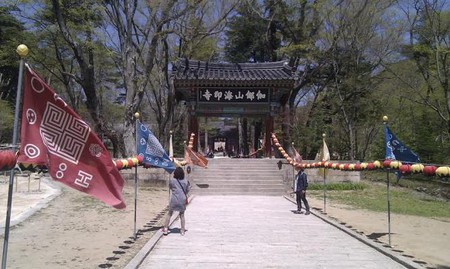 Like apparently all of Korea’s most ancient temples, Haeinsa was burned down repeatedly, including by accident in 1817. Its worst and most famous brush with death came, however, in September 1951 during the Korean War. At that time, communist guerrillas tried to use the temple’s buildings as a base, but were persuaded to leave by the juji, or abbot. The South Korean army learned of the guerrillas’ plan, but did not know they had not succeeded; therefore, it ordered the temple to be bombed. In a stroke of inspired insubordination, the bomber plane’s pilot, Col. Kim Younghwan, refused to carry out his mission, and was disciplined; after the war, however, he became regarded as a hero for preserving a major cultural relic. Haeinsa has avoided any mishaps since then, and has been the base of some outstanding monks in the decades following it.

Despite being harder to get to than the other jewel temples, Haeinsa is worth the trek, especially for those interested in Buddhist scripture. It offers good mountain views besides its buildings, which contain fine paintings and sculptures. Anyone spending time in southeastern Korea should try to go.