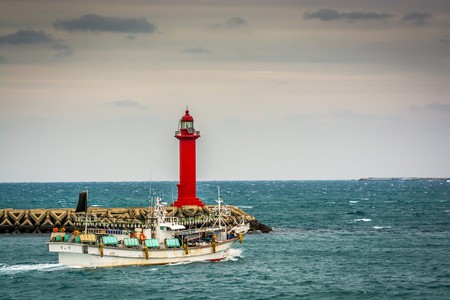 Situated off the eastern coast of Jeju Island, Udo Island boasts a unique local heritage and a number of natural attractions that make it a favorite South Korean destination. Dedicate a day or two to this lush locale and be charmed by its people, delighted by its cuisine and entertained by the numerous available amenities.

Things to see & do

Situated on the eastern side of Udo, Geommeolle is most known for its small but beautiful black-sand beach, which leads into a cave encompassed by large boulders. Visitors can spot Jeju Island’s widely celebrated haenyeo, or female divers along the coast. 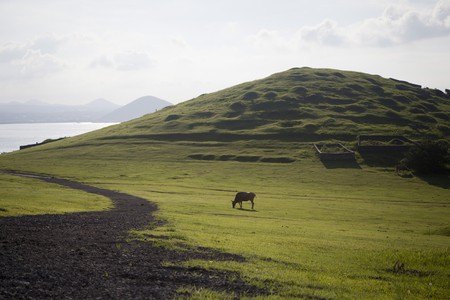 As the highest spot on the island at 132.5 meters (433 ft), Udobong Peak offers a majestic panoramic view of the surrounding endless turquoise waters and the verdant, lush land that they encapsulate. In spring, yellow canola flowers blanket the park, while the towering lighthouse that tops the peak makes for a scene seemingly straight off a postcard.

Seobinbaeksa Beach, also known as Udo Sanho Beach, is perhaps one of the most popular tourist attractions in all of Jeju. Along this gorgeous stretch of white sand the ocean varies in colors, from bright emerald to deep sapphire according to its depth. It is often compared to the Mediterranean Sea. 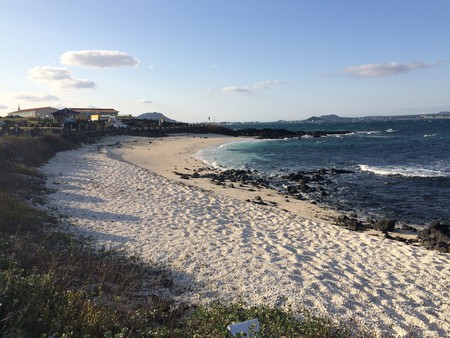 Unsurprisingly, the fishing industry has long played a vital role in the lives of Udo Island’s inhabitants. Learn the tricks of the trade from the locals, using fishing lures and rods to catch a variety of fish including filefish and rockfish, all the while enjoying the spectacular views of the island. Inquire about equipment rental at one of the many fishing shops located at Udo Cheonjin Port.

Udo Island is renowned for its fresh and delicious seafood. Howyanggwa Guksugun, located next to Seobinbaeksa Beach, is a great place to sample dishes such as noodles topped with raw seafood or dolmuneo haemultang, a refreshingly spicy rock octopus and seafood stew.

Udo is famous for its peanuts, which are said to be crunchier and more aromatic than any other peanut, and are incorporated in a number of local delicacies. Perhaps the most popular among tourists is peanut ice cream and no one does it better than Jimmy’s. Sample this all-natural treat with caution – it’s highly addictive! 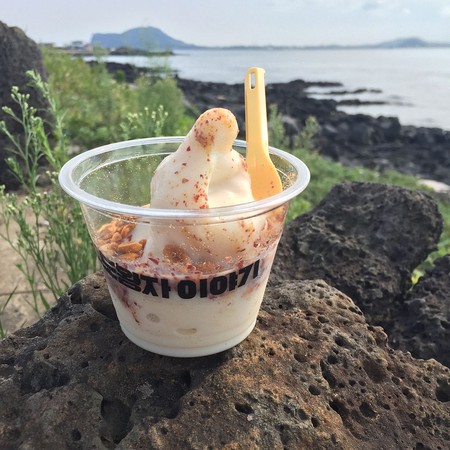 No visit to Jeju Island would be complete without trying its famous black pork. But Bongkkeurang goes beyond samgyeopsal and uses the locally sourced meat to create a tasty savory burger… on rainbow buns. The result is as delicious as it is Instagram-worthy.

There are numerous ways to get around Udo Island. The island’s shuttle bus (tickets ₩5,000 won) is one option. It departs every 30 minutes and stops at four major attractions along Udo’s periphery. To get more off the beaten track, or to explore on your own time, consider renting an electric car, scooter or bicycle. There are various rental shops situated next to the Udo Passenger Terminal and throughout the island. Remember to bring along your international driver’s license to rent one. 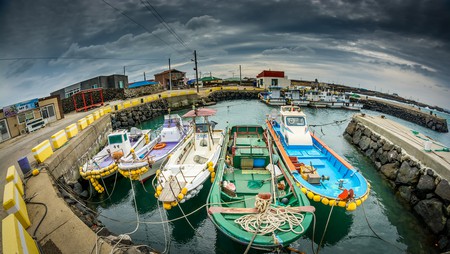 The journey to Udo is an easy one. From Jeju Intercity Bus Terminal, take Bus No. 701 or 710 to Seongsanhang Port Bus Stop. The trip will take approximately an hour and a half. Walk to Seongsanhang Port Passenger Ferry Terminal and board the ferry bound for Udo Island (travel time 15 minutes). The ferry for Udo departs hourly from 7:30 a.m. to 6 p.m. but may be canceled in the case of inclement weather. Be sure to check the weather forecast beforehand.